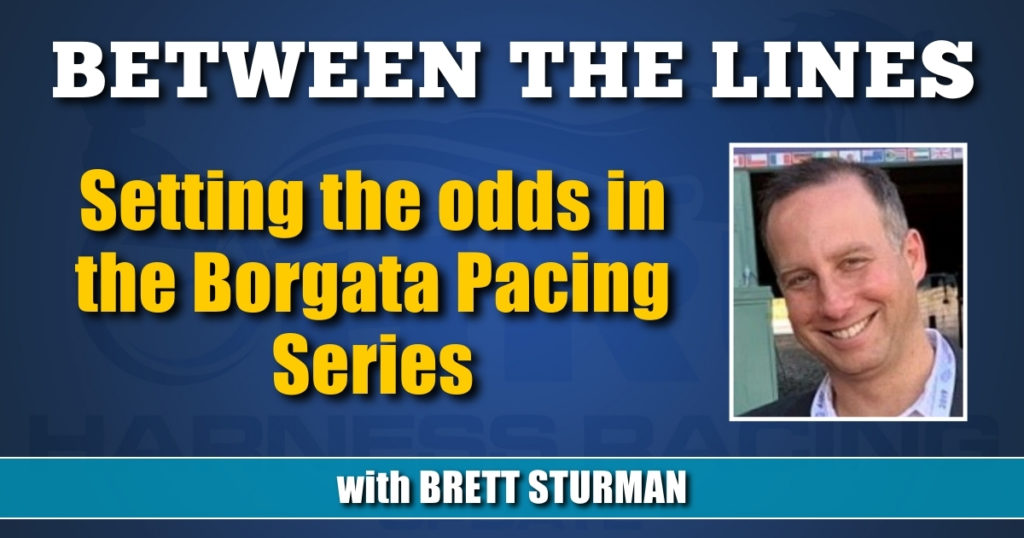 Setting the odds in the Borgata Pacing Series

After being derailed like much of everything else last year, the annual series for free-for-all pacers returns to Yonkers for the first time since 2019. Now under the branding of the Borgata Pacing Series, the series formerly named to honor George Morton Levy begins with its opening of five legs this Monday (March 15).

Here are unofficial odds to win the series, as I see it:

Let It Ride N (Even): Let It Ride N enters the Borgata series a perfect six-for-six stateside, and I doubt that there’s been a heavier favorite to win the series since at least when Foiled Again won the Levy all the way back in 2009 and 2010. Let It Ride N has been the story in racing this winter and has passed every test fast and comfortably. He did have a race over the track back in January in which he was a multiple move winner from post 8 in the open handicap and beat a couple of sharp ones at that time in that process. I wouldn’t worry too much about that recent qualifier when he was second by a nose; Dunn didn’t ask him for anything until the waning stages and once he did, was motoring. If not for the chance of a race or two with post 8 in a competitive field, he could very well sweep the series; the road unquestionably goes through this one.

American History (8-1): He’s a bit of a wild card, but when he’s on his game he’s exceptionally fast. The former Breeders Crown winner from two years ago is best known for his speed on the mile track having put up 1:47-type miles for three years in a row now, but don’t forget that he once set the track record here at Yonkers in 1:49.3. He was a fast winner at the Meadowlands three back and jogged over this track four back; could make a lot of noise throughout the series.

Any Nancy Takter-trained horse (10-1): This trio of horses consists of None Bettor A, Stars Align A, and San Domino A; all of which will race in the opening leg as newer additions to the stable. The best chance of the three probably goes to None Bettor A who is no stranger to these parts and is far better than that 1-for-12 record from last year shows when racing against many of the sport’s best. He qualified sharply on 2/27 over a couple other Borgata starters and is a classy horse that could be heard from. Stars Align A was a 1:48.4 winner at Dayton last year, though I’m sure the connections were hoping for a little more last week in his first start for the barn when he came up a bit short at 50 cents on the dollar. I’d look out for some changes and if anything could offer value in his opening leg if he can bounce back. San Domino A toured the track at the Meadowlands last out as a prep and won an open here by 4 lengths in December in which he swept off a torrid pace.

Hesa Kingslayer N (10-1): This one hasn’t been able to slay Let It Ride N in the three times they’ve met, but he hasn’t been bad in defeat either. In two rallies – one here and one at the Meadowlands – he rallied willingly, and in another race at Yonkers he had to come first-over with Let It Ride N on his back. This one can close, as was shown here in January when he rocketed off cover to win an Open easily. Has the benefit of landing the rail for his opening leg; should be a spot to notch first or second points.

Top Burke contenders (12-1): Trainer Ron Burke has four entries in Monday’s opening legs, though the top two who stand the most likely chance to go far in the series are Backstreet Shadow and This Is The Plan. Both of them raced hard against the older free-for-allers last year and both had notable success at times. This Is The Plan won a $125,000 preview of this race in November and Backstreet Shadow banked over $400,000 last year while winning 7 of 21. I suppose that another Burke entrant, Rockapelo, shouldn’t be discounted entirely either; he’s made a nice living at this track and these types find ways to pick up series points along the way.

Leonidas A (12-1): Despite lesser heralded connections, this one should absolutely not be overlooked. He outkicked Bettor’s Wish fair and square to win the Potomac Pace at Rosecroft in November and has returned right where he left off; his close off cover here two weeks ago to win in his first start back was impressive.

American Mercury (25-1): He actually upset Bettor’s Wish here in the 2019 Messenger and raced decently here towards the end of last year in mid-to-upper level conditioned races. He did finish ahead of Let It Ride N in that recent qualifier though I wouldn’t necessarily put too much stock into that; goes first time in the Nifty Norman barn and we’ll see if he can continue to move this one forward.

Shnitzledosomethin (30-1): The 6-year-old has been rock-solid this winter and I’m not sure this one has gotten the notoriety he deserves throughout his career. By Fred And Ginger, he’s amassed over $850,000 in earnings and a successful series would obviously help push that number towards the $1 million mark.

Any 2019 Levy entrant (50-1): So much has happened since the last time this series was contested that of the 40 entrants in Monday’s opening leg, only six of those raced in the 2019 edition. Those horses include the defending champion Western Fame, Ideal Jimmy, The Wall, Rodeo Rock, Lyon’s Steel and Mac’s Jackpot. Many of these horses are still going strong but in a couple of cases maybe a little too much water under the bridge to take the series title.

All other horses (20-1): There’s a few other horses in here that could break through in this series and if nothing else, go onto be solid upper-level types as the year moves on. That includes Ostro Hanover, who was runner-up in the November Borgata invite as well as Ana Afreet N who enters this series as a formidable entrant for Cullipher. Similar could be said for a number of the New Zealand imports going for Shane Tritton and Peter Tritton.