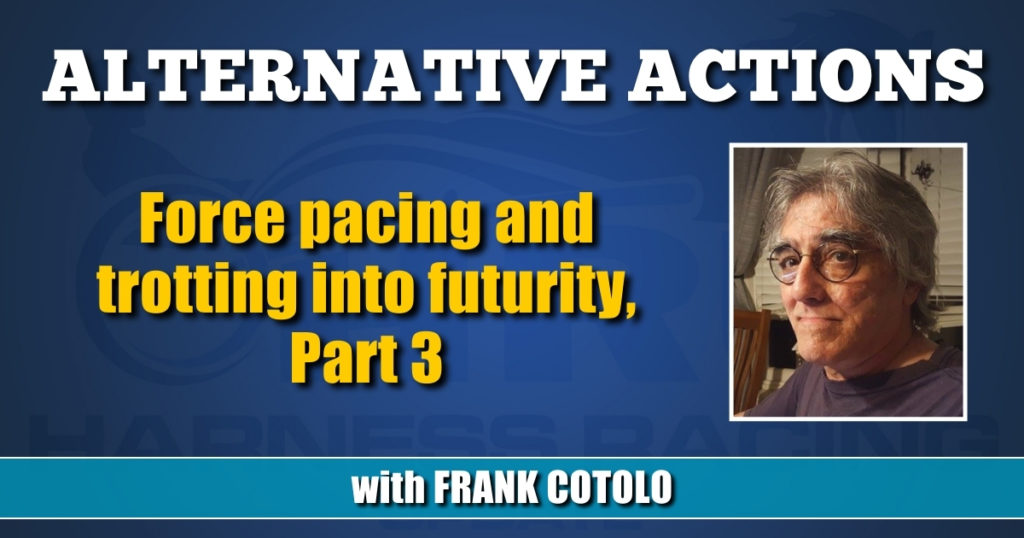 In the 1960s, James Cagney, famous actor who also owned, trained and drove trotters, said the beauty of harness racing made him cry. Fans and industry participants like Cagney are rare anymore. Most of them have passed on from the “glory days” of harness racing. In the new millennium, the sport has lost many such lovers but the game of pari-mutuel racing is surviving, if not thriving.

In this closing part of the three-part series, we pursue what the pari-mutuel business needs now — visionaries that can devise ideas and plans from a mental effort that attracts bettors, old and new. A visionary sees through things; those things being obstacles — real or unreal — that he or she refuses to believe are invulnerable.

One single visionary can change the course of any environment or walk of life. When he or she appears, no one see them coming because the cultural and commercial atmosphere is as now exists in pari-mutuel horse racing. They should be easy to spot if we keep our ears open to what may now seem like outrageous ideas, because today’s outrageous is tomorrow’s normal.

Howard Hughes was a visionary of aviation. When the fledgling commercial airplane industry accepted a fixed altitude for modern aircraft flight, aviators across the board agreed that was as high as there was to fly. Hughes disagreed, insisting a much higher altitude was acceptable and safer, which was the key to attracting more commercial-airline passengers.

In the early 1940s, Hughes correctly established that only one percent of the American population had ever set foot on a commercial airliner, mostly because people were scared to death of flying. It was the rocky, rumbling turbulence of commercial airplanes that scared them the most. “If we build a plane that can fly above the weather,” Hughes said, “we can get every man, woman and child in [America] to feel safe up there.” From that theory, he went on to predict, “An airplane with the ability to fly in the sub-stratosphere across the world is the future.”

Hughes’ vision — albeit from a man with the kind of money and power needed to change an entire industry — was instituted from the ground up, so to speak, and air travel became the prevalent and fashionable way to travel.

In the 1960s, a visionary in the world of sports may have eclipsed Hughes’ influence in his business when standing defiant against a homegrown American institution — baseball.

When American businessman Charles O. Finley purchased the ragged Kansas City Athletics, every team owner in baseball scoffed at his involvement, and as Finley developed unprecedented gimmicks to strengthen the team with fresh talent he worked equally as hard to create new fans to the deteriorating sport.

In the decade when pop culture was exploding, baseball games were being considered sluggish and boring. “Charlie O,” as he became known, knew that baseball was show business — a show and a business — and if he could rock the boat of baseball tradition — bring the sport into the future — it would mean survival and it would thrive to the beat of a growing dollar’s worth.

Charlie O broke down traditional y aspects of Abner Doubleday’s sport in such ways that renewed baseball’s core audience and markedly expanded the fan base. Charlie O’s influence was most apparent when he moved the Royals from Missouri to California, where he started from scratch with the Oakland Athletics.

In his former business, one of Charlie O’s friends said there was something “genie-like” about him. “I always felt like I was in the presence of P.T. Barnum,” his friend said. “He was an awe-inspiring figure, like a magician or the master of ceremonies of a three-ring circus. You always expected him to produce something you’d never seen before.”

As opposed to offering millions of dollars to buy established stars, Charlie O sent scouts across the USA to find complete unknowns with the potential to turn into established stars. The process would eventually bring to baseball Reggie Jackson, Catfish Hunter, Vida Blue, Rickey Henderson and Dennis Eckersley, Mark McGwire and Jose Canseco. Charlie O scrapped the 60-year-old standard baggy uniforms, replacing them with tight brightly colored ones. The baseball establishment disapproved but popular opinion did not. ESPN’s Paul Lukas wrote Charlie O was “dragging baseball into the modern age.”

The public embraced his ideas and Charlie O gimmicks always got press. He made the team mascot a picture of an elephant in an Athletics uniform and named it Harry Elephante [sic]. The Oakland stadium was refurbished in favor of the live spectators. Once the A’s won their first of three-consecutive World Series, the newborn stars became an abrasive bunch off the field and Charlie O encouraged the press to cover the brawls, since on the field they played perfectly.

Before their reign ended, closure that would spawn the “Moneyball” theory, Charlie O ruptured the baseball establishment as his ideas became trends throughout the leagues and fundamental changes ensued from the rules to the business of baseball.

Harness racing needs some people like Charlie O to upset the establishment and take great chances with every aspect of the sport from the silks to the sulkies to the rules and the greater desires of the bettors. A man or woman visionary, someone who, like Charlie O, as team manager Dick Williams said, is someone who the farther you go away from, the more you realize it.