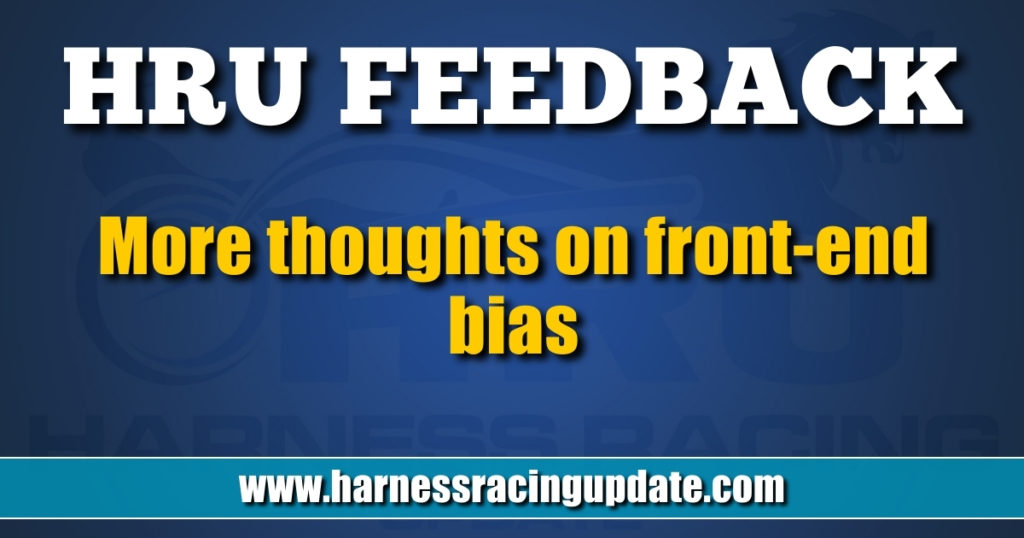 Longer sulkies, drivers that lean back partly to blame for front-end bias

The article about front end bias (full article here) was interesting and informative. One of the causes of this issue is the length of the race bikes now in use by all drivers and the leaning back of the drivers. In the old days, of which I am infinitely familiar with, the bikes were short enough for drivers to actually touch a horse’s tail easily and drivers sat upright in the bike. Now, the bikes are somewhere between two to three feet longer. Hence, the difference between the horse’s nose and the end of the bike in addition to the leaning of the drivers creates an over three feet difference for each horse from previous racing situations.. So, this causes a horse sitting eighth to have to overcome an extra distance of over 20 feet. It’s just another reason racing has such a front end bias.

I’d like to add my 2 cents to Brett Sturman’s article “Assessing the notion of front-end Bias.”

There are several differences in racing style from 20 and 30 years ago to today. I’d like to expand on his observation.

As you describe “cozy tucks are (not strategically) provided.” I agree there are times when it makes sense to allow a horse to squeeze in, but in the majority of the time it’s because they don’t want to hang out one of their fellow drivers. I think this mentality falls into the same vein as why you almost NEVER see an objection against another driver. There should be comradery but not at the expense of the bettor. Upset your life blood and they will find another way to spend their gambling dollar. Tracks need to crack down on this practice. Overall it is hurting the sport.

• Floating out of the gate.

When this started it was an ingenious way to not use your horse too hard in the opening quarter, but now there is no urgency to get to the top resulting in slow opening quarters. If the Buddy System wasn’t in place, maybe it wouldn’t be so advantageous to “float”.

• Pulling and waiting for cover.

To me this is one of the BIGGEST differences from 20-30 years ago. Back then, when you pulled, you moved forward to either take the lead or to gain position on the leader. Yes, first over is a tough place to be BUT just hanging and not creating any outside flow is a main reason the 2nd and 3rd quarters can go as slow as they do. How many times do you see a horse pull out of 6th and hang 6th for a 1/8th of a mile until someone pulls in front? How do you challenge the leader without flow? My suggestion, unless a horse stalls, there should be a fine and potentially a disqualification if a horse does not gain position once pulling to the outside.

I’m not totally sold on this being a main contributor to the lead horses hanging on, but it does have some merit. When I watched races in the early ‘70s, drivers were upright and horses noses were on the driver right in front of them. There was very little flow. Then in the late ‘70s and ‘80s horses started gapping a little more. Races were going faster, there was more flow,” a la Meadowlands” style, but there were still horses that would come from off the pace to win.

Today’s style of lean and longer bikes has increased distance from first to last BUT it is not as big as you think as compared to the ‘80s and ‘90s. It might add 5-8 lengths from first to last as compared to the ‘90s, but it is not like trailers are losing by 5-8 lengths. Trailers just don’t gain anymore in the last quarter as they did in the ‘90s. I think my previous three points are more of a contributor of why leaders are winning more than the bike and lean.

Bottom line, drivers and track owners need to rethink how today’s racing style is hurting the sport and what needs to be done to correct this. I find it hard to believe that leaders winning at a 70% clip isn’t one of the reasons why gambling dollars are going to other sports.

I am responding to Joe Mullins and his Doctrine of Proportionality philosophy (full post here) he shared with readers on February 28 in the Feedback section. Apparently in Joe’s nearly 83 years on Earth, he still doesn’t get it. He opines endlessly, describing how his trainer’s multiple mistakes and subsequent penalty should only affect the owner of the original infraction. Hey Joe, that may be all well and good except for one glaring FACT which you failed to mention. The GAMBLERS!! That’s right. The people who make in your words, this “challenged” sport possible. What about the GAMBLERS who were beaten by your trainer’s banamine infused horses? Maybe your trainer as well as the owners should be fined proportionately to the money your trainer defrauded the public by racing chemically enhanced horses.

Regulators need to step their game

I was introduced to the incredible sport of harness racing many years ago at Michigan’s DRC and Hazel Park tracks. Sadly, they have been gone for many years now. But, I found new interest in the sport through the on-track TV broadcast from Roosevelt and Yonkers raceways by Stanley (Stan) Bergstein. Stan’s broadcasts made the sport feel real and provided insight into the workings of the sport from all levels. One of the main things I remember were the Roosevelt measures taken to assure racing integrity. An example were the post-race follow-up on swings in performances. Both exceptional and poor performances were monitored and if a horse’s performance changed significantly from week to week there were suspensions and fines. Judges and state officials took a real and professional roll in assuring the public was served.

• Now, it’s a case of not that you were caught cheating but rather how many times.

• Now, when there issues in the running of the race, there is no follow-up posted on the track’s website.

• Now, it’s not if you went inside of a pylon but rather, how many and were you really trying to gain an advantage (I’m sorry officer I really didn’t mean to speed and I wasn’t trying to get to my destination quicker on purpose).

• Now, make a hole to let the parked driver pull into.

• Now, forget the “catch you cheating once and it’s a lifetime ban.”

• Now, most, if not all racks have refused to upgrade the racing experience to include things like to laser drawn finish line as used in many other sports like baseball pitching strike or foul ball box or first down spotting in football

• Now, the horses reach the first quarter mile and then you find out your horse’s odds dropped from 8-5 to 2-5, the rest of racing across the planet use locked-in odds.

Trust me, the tracks know what needs to be done and they hear our feedback but the “Good Ole Boy’s Network” ain’t going to fix it until forced to do so. Accordingly, if we don’t demand change and put our money where our mouth is then the wrong is on us.

If anything, the last six weeks of racing with double the amount of longshots at all tracks has demonstrated just how much attention the racing officials are taking with racing integrity. Perhaps we need to take a lesson from many cities across the country that are de-funding the police. If there’s zero action being taken by the racing officials, let’s defund the oversight. We can start with the state officials.

While the tracks are bragging on their handles, ask yourself whether you want to participate in a semi-regulated game. Every week I see hardworking, honest people committed to the sport in interviews, I believe it’s a slap in their faces to continue to ignore the sport’s integrity. Perhaps a moratorium or time-out on betting would force the requisite changes.