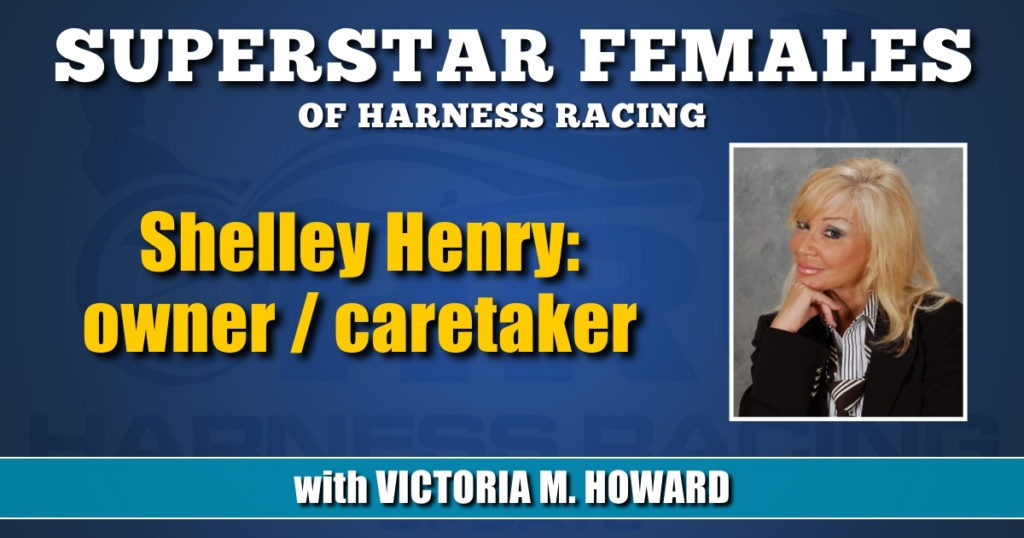 This edition’s superstar is a long-time dedicated, hard-working horsewoman who comes from Arthur, ON.

Born in Guelph, ON, a young girl named Shelley Koch would accompany her father, James, a lineman for Ontario Hydro, to the barn to see his several standardbreds that were trained by Mike Schaefer and Jack Powell.

“I think I was around 9 or 10 years old when I’d go with dad to the barn on weekends and attend the races at night when our horses raced in Ontario,” Henry said.

“Although my family was not involved in the business other than dad owning some horses, my husband Wayne’s family are the ones that really got me involved.”

Courtesy Shelley Henry | The Henry family have long been fixtures on the Ontario Sires Stakes circuit.

Shelley is talking about the Henry family — one of the most respected names in harness racing.

Ross Henry — the patriarch — was raised on the family farm in Arthur and began his involvement in harness racing in 1965. He was a well-known trainer of what is now Ontario’s Signature circuit, having amassed 533 wins and over $7 million in purses.

Ross and his wife, Joyce, raised six children: five sons and a daughter. Two of the sons, Trevor and Wayne, followed their father’s footsteps, both becoming successful horsemen of their own.

“I was straight out of high school when I started working on my husband’s family farm, and I’m still there,” Shelley said, laughing.

“Wayne and I met at a race track, of course — where else?

It was Elmira Racetrack where he used to catch drive, plus drive his own. Today, he mainly drives our own horses.

“He works so hard and always has. We keep enough horses to keep us both busy and as we get older we tire easier. We really enjoy training the babies for it’s so gratifying to see the young horses that we have broke and trained get to the races.

“We’ve been working together for 35 years which is quite a feat in itself.

“Sure, we have our differences in opinions here and there, but who doesn’t?

“We race mainly in Ontario — mostly in the Ontario Sires Stakes and overnight races, but of lately we’ve raced a little at Pompano Park in the winter.

“At the time we have four horses training in Okeechobee, Florida, and one training in Ontario. We also own three broodmares and a yearling.

“We’ve been coming to Okeechobee, Florida, in the winter for the last 25 plus years. It is so much nicer training the younger horses in Florida than the frigid Canadian winters back home. This year, Wayne is helping Gregg McNair in the mornings and I help Ed and Keelan Green, and then Wayne and I do our own horses.

“Over the years we have had some nice horses, such as Independent Lassie, Independent Woman, Tymal Timeout, Lookit, Could It Be Magic, TJ’s Mr Lave, Major Herbie and the list goes on.

“My favorite horse would probably be Could It Be Magic for she had a heart like no other.

“We have won some really nice races, but one that stands out for Wayne and myself was winning the Dream of Glory — a race that’s held in Hanover, Ontario — which is a small home track where a few of Ontario’s leading drivers made their debuts.

“The enthusiasm that night was awesome! The fans in the grandstand were cheering and clapping when our horse Warrawee Promesse returned to the winner’s circle.

It was a very special night, for sure.”

How different is racing in Canada?

“I think that outside of the locations and weather conditions, harness racing is the same. The horsemen are wonderful, dedicated people that live and breathe the business. In general, most of the horsemen love their horses and treat them as if they were their family,” Shelley said.

“I think Canadian fans and American fans are equally enthusiastic. I’ve been at this for over 40 years and I must say I’ve met so many great people in the business and have had so many nice horses.

“It doesn’t matter to me if the horse is a champion or a cheap claimer — I treat all the horses the same. This is a tough business and we are still at it, so I’m thankful for that.”

The Henrys have a daughter, Nicole, who helps her parents with the horses when she’s not working at a small animal clinic.
Perhaps she is a future veterinarian in the making.