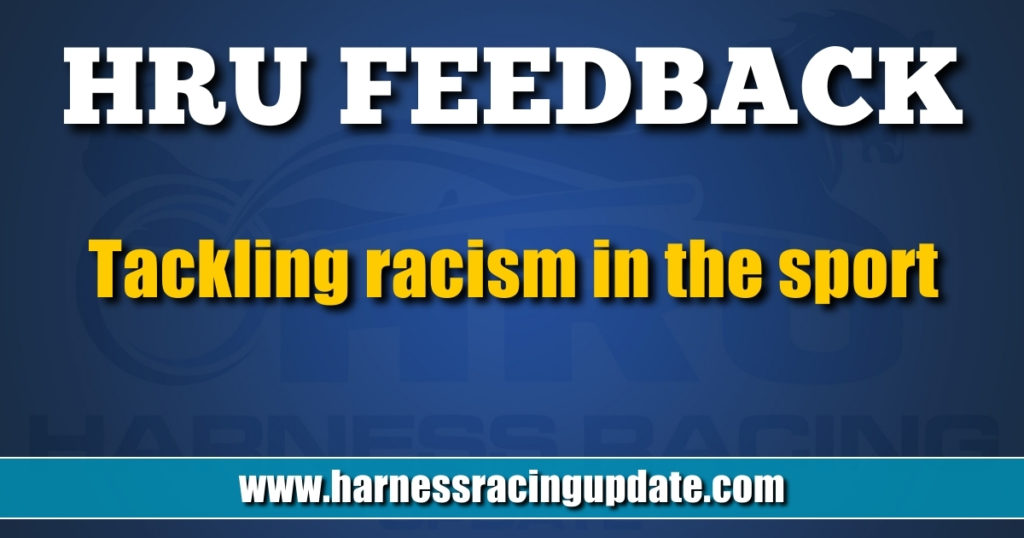 What can be done to tackle racism?

There are a couple young drivers at Freehold who have made meteoric progress to get into the bike. How did that happen? Family relationships. A problem is African Americans lack that entry into the game, and that’s a key pathway throughout the history of the sport. George and Montrell Teague are examples. Racism is subtle of course, although some find it hard to hide. Subtle? When the judges are looking to fill in drivers. Montrell, a multi-Breeders Crown stakes winning driver, whose dad George’s training record speaks for itself, hardly ever gets a call for that open driver’s slot. Yogi Sheridan’s route was different from mine, I bought a horse to complete my drives. There was one trainer I asked if I could take a qualifier, and he all but said a N***** would never get on a horse of his. A lot goes into a decision to list a driver, but Montrell’s lack of drives at the Meadowlands is both astonishing and revealing. At Dover Downs’ current meet through Feb. 18, Montrell Teague is fourth in driver standings behind Tetrick, Callahan, and Alan Davis. What can done, the article asks. For one, there’s a significant African American interest in and passion for harness racing in Mississippi. Black drivers and trainers from Mississippi have competitively raced in Indiana and Illinois as trainers and drivers, others have sold racing stock for good money. At Hawthorne last year, I think a race went where there was a black driver or trainer for every horse. If it’s a goal to tackle racism, maybe the USTA can start by sponsoring selected fairs in Mississippi, and perhaps linking promising drivers and trainers with mentors in the north. Obviously, these guys have never had access or opportunity like those young drivers at Freehold. And racing judges, take discretion and list accomplished drivers such as Montrell. Who knows? He could likely hit the wire first as his past drives have shown he can.

Very nice article by Debbie Little calling attention to the diminished participation of African American horsemen in harness racing (full story here).  A good place for the industry to start to address this would be to induct George Teague, Jr. in the Harness Racing Hall of Fame. In the last 20 years, no trainer or owner has had any more success than George has had. He has owned and trained two different Horses of the Year and many other division leaders. It is time for the Hall of Fame, USHWW and the entire industry to recognize all of George’s wonderful accomplishments as a trainer and owner, he is most certainly worthy of induction in the Hall of Fame.

I enjoyed reading Mr. Nosrac’s article on looking for a pot of gold at the end of a rainbow (full story here). However, it is utter nonsense. The rumor that his forefathers came to Ellis Island after a hot day at the track seems highly unlikely. Even if true it fails as a philosophy for others to follow. Yes, I do see people standing in line to waste their hard-earned money playing Mega Millions at the supermarket. Money that could be better used buying groceries. Playing horses is a fun pastime for millions. Most of these people put in time and effort to try and stay on the plus side of the ledger. Those who look for a life changing “big score” at the track are simply tossing their money in the garbage can. The gigantic RAINBOW PICK 6 scores usually are cashed by syndicates of wealthy bettors playing multiple tickets. Rarely, does Joe Nosrac win a couple million by playing $12 on a wild exotic bet. My father’s family came into Ellis Island in 1920. They had to bunk in the bottom of the ship back then. I don’t think they paid a vast amount to come to America at that time. My grandfather was a barber. I doubt he played the ponies.