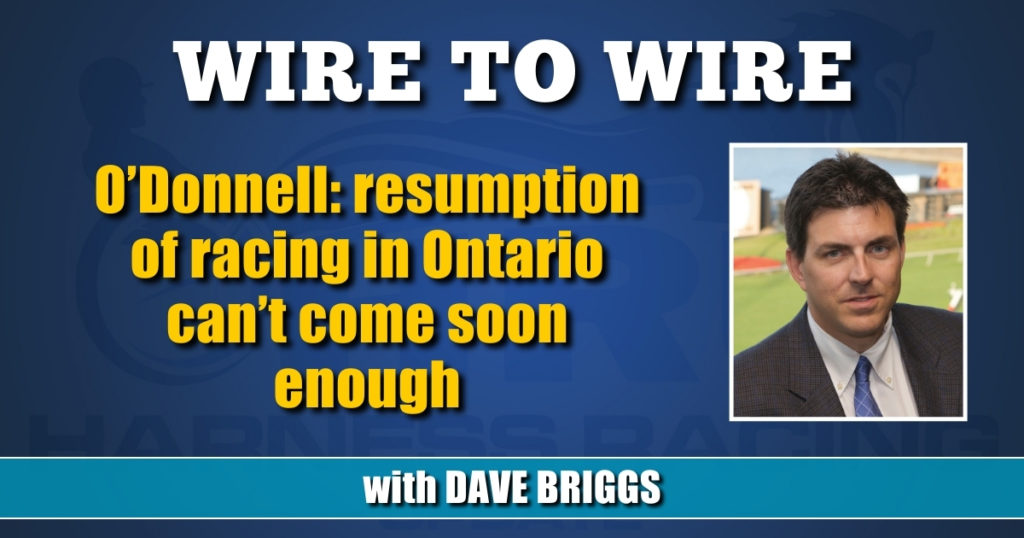 “People live week to week, so it’s been a tough one,” said the president of COSA about a two-month province-wide lockdown that is being eased this week to allow horse racing to resume at Mohawk, Western Fair, Rideau and Flamboro.

The resumption of horse racing at all four of Ontario’s winter tracks this week can’t come soon enough for many of the province’s horsepeople, said Central Ontario Standardbred Association (COSA) president Bill O’Donnell.

“People live week to week, so it’s been a tough one,” O’Donnell said.

Racing has been on a two-month hiatus in Ontario due to a COVID-19 province-wide lockdown that is being eased, slightly, in the regions where Woodbine Mohawk Park, Flamboro Downs, Rideau Carleton Raceway and The Raceway at The Western Fair District are located.

Though Ontario Racing was able to successfully lobby for unused purse money to be distributed to those that have been racing in the province recently, O’Donnell said that money, while greatly appreciated, doesn’t stretch that far. The fund allocated $300 per horse for December and $1,000 per horse for January.

“The $1,000 a month, that at least takes care of the horse if you do it bare bones and you’re not using a vet much or have extra expenses other than feeding them and training them, but that doesn’t feed the people,” O’Donnell said. “If you have owners that can pay their bills, that can keep them afloat a little bit. I’ve heard some farms are giving the trainers breaks with rent and stuff, but how long can that go on?

“I think a lot of horses get sold to the United States, too. Hopefully that doesn’t hurt our horse population too badly, but it’s hard to tell from the first day’s draw. That will show up in a couple of weeks if that’s the case.”

This is the second time racing has been halted in Ontario due to a COVID-19 lockdown. Last year, when the pandemic first took hold, racing was halted from March 20 to June 5. Once it returned, though, strict adherence to safety protocols allowed horse racing to continue unabated without any outbreaks at any of the province’s tracks — standardbred, thoroughbred or quarter horse.

“We were as careful as you could be. There were guards there patrolling and watching you to make sure you put your mask up. I think everybody, for the most part, realized the consequences if you didn’t… We did it right and we weren’t to blame for this shutdown,” O’Donnell said, adding that now is not the time for people to let their guard down.

“We’ve got to remain vigilant,” he said of the need to strictly follow safety rules.

As per the provincial government’s restrictions, spectators are not permitted at any of the tracks at this time. Only those performing essential duties relating to the operating of live horse racing are currently permitted onsite.