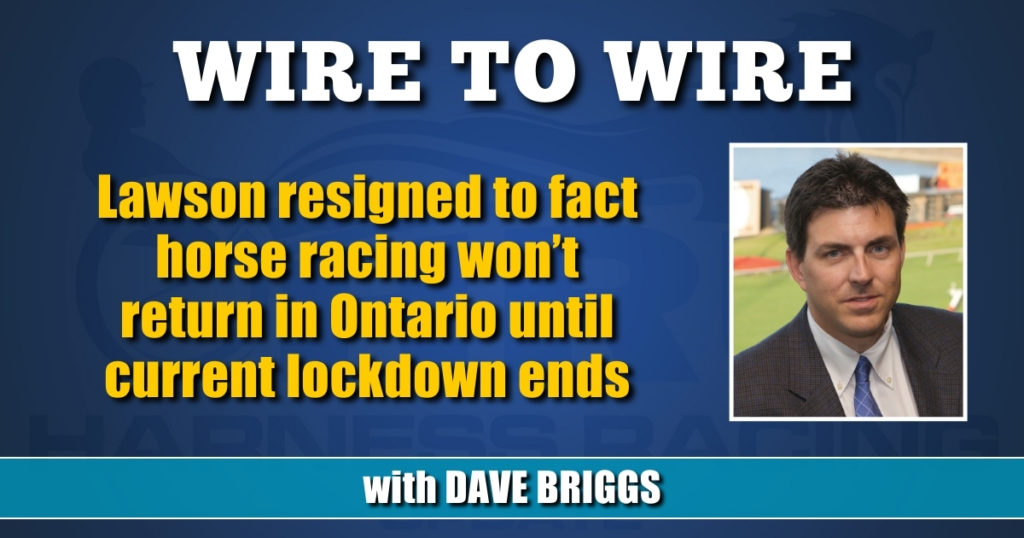 Yet, strong push back from an industry chaffing at the fact some professional sports such as the NHL have been given an exemption to play on, has placed horse racing on the government’s radar to resume when current stay-at-home orders are eased. Horse owner Mike Tanev, who has two sons playing in the NHL, has been at the forefront of helping the issue gain mainstream traction.

Woodbine Entertainment Group (WEG) CEO Jim Lawson is resigned to the fact the best horse racing in Ontario can hope for now is a resumption of racing when the current provincial lockdown ends.

Pleas for an immediate return to racing arguing it would be consistent given other professional sports have been allowed to play on, have fallen on deaf ears for most of January. Racing has been shut down in Ontario since Dec. 23.

“I don’t think now is the time for us to start back up,” Lawson said Friday (Jan. 29). “What I do think is that we need to be considered when portions of our economy start up, whether it’s mid-February or mid-March. We’ve earned the right to do it, primarily because of our (COVID-19) safety record and protocols have been nothing short of outstanding… it’s been perfect.”

Currently, Ontario’s stay-at-home lockdown order is scheduled to end on Feb. 11, but Lawson is realistic that it may be extended.

That said, Lawson does have some good news. He believes the work of people in the industry to contact government officials, as well as strong media attention on horse racing’s plight, has helped the sport get the attention it deserves to restart when the current lockdown conditions are eased.

“I did speak to, and I’ll just leave it as ‘government official’ yesterday and do have a sense that we are… definitely on the radar of government now. I’ll just say that is the result of many people, many horsepeople writing into their MPPs and others, expressing support. I’m very thankful that people have done that and I think it’s made a difference, I really do,” Lawson said.

Standardbred owner Mike Tanev of Scarborough, ON is one of those that has been particularly vocal in the media. He owns 10 horses spread between Carmen Auciello, Mike Vanderkemp and Hank Lilley. Tanev also has two sons playing in the National Hockey League (NHL). Chris Tanev plays for the Calgary Flames and Brandon Tanev plays for the Pittsburgh Penguins.

“I’ve been at this for about two weeks now and I’ve been on three podcasts, in a newspaper article and now you, so that’s five people in about two weeks that have found out that I’m the one with the big mouth. I’m trying to make it better for everyone, including Woodbine,” Mike said.

For Lawson, Woodbine employees are front of mind.

“The tough news is that this thing is so unpredictable and people are going through a lot of hardship, unfortunately, not the least of which are our own employees,” he said. “We’ve got 1,500 people laid off and it’s terrible. As I will look back and reflect on this period, the toughest part for me is going to be the people. It’s 100 per cent about the people, not just our employees, but the whole horse community and the impact has been devastating. Let’s hope we can get going again soon.”

Lawson said he is realistic about the fact that horse racing is one of many businesses being severely impacted by the lockdown.

“This is a serious period, with a serious health crisis and I understand that,” Lawson said.

However, he said he “absolutely” takes umbrage to the provincial government’s assessment that horse racing did not fall into the category of a “professional” sport such as the NHL. He also doesn’t like the fact the province has singled out certain sports for an exemption.

“I think the horse community and the racetrack community have reason to be upset,” he said. “When that language came out permitting certain sports and the pro athletes, that was, in my view, a complete oversight of racing and that was disappointing to me.

“To overlook or disregard horse racing and mention other sports or sports leagues, which do not have near the economic impact on this province or employ the people that the horse racing industry does, I found that a disappointing oversight or mistake.

“When the government takes a look at the economic hardship suffered by what amounts to thousands of people, and the longer-term negative effects on this industry as people head south and begin racing in the United States and maybe not coming back for the spring, it’s going to be a damaging effect on this industry. There’s a damaging effect in the short-term, but that damage has longer-term effects, too. It affects sales and so on.”

NHL dad Mike Tanev said he believes the reason the NHL has an exemption to play is because it is paying for daily COVID-19 testing.

“I think to the NHL’s credit,” Mike said, “they’ve gone to every individual provincial Health Minister and said, ‘Okay, we need to play. Our league is going on in the United States and we have seven teams in Canada. We want to play and what do we have to do to satisfy you health people in each of the individual provinces?’ And I know what happened, because my kids tell me. They are getting tested every day and I’m sure that there was a mandate put out by the governments of every province saying, ‘Okay, if you satisfy all of this criteria, then we’ll allow you to play as long as there are no huge outbreaks, and if there are then you guys have got to put a nail in it right away before it gets any bigger.’

“Why can’t we as (the horse) industry go to the Ontario government — and I’m putting the onus on WEG because they are the biggest one with the most clout —and say, ‘I don’t care about the NHL and what you allow for the NHL, they’ve done what you’ve asked them to do, but give us criteria that we have to follow and if we can follow that criteria then we should be allowed to play as well.’”

Lawson said he has tried to convince the government that horse racing could follow the NHL’s lead and conduct daily, rapid COVID-19 testing, but has gotten nowhere.

“Don’t think we haven’t tried,” he said. “I’ve spoken to the sports ministry, the health ministry, finance… I’ve spoken to our MPPs and asked, ‘What is the process? How do you get in that queue?’ So, that’s been frustrating, too.”

If the cost of daily rapid testing is an issue, Mike said it should be funded not by taking it out of available purses, but, rather, from a small percentage of the purses paid out.

“You can’t take the money from the purses to directly pay for the rapid tests, because that’s part of the government allotment and you can’t touch that money, but once the money has been disbursed, the five people that get the money – one, two, three, four, five – I’d take a certain percentage out of their purses to provide the rapid testing for the night,” Mike said. “According to (Central Ontario Standardbred Association president) Bill O’Donnell, there’s about 150 people that go into the paddock on any given night, so 150 people, and I’ve been researching and I did this with Carmen (Auciello) one day, the rapid tests can get results now in about 15 minutes. The rapid tests will cost anywhere from $5 to $20. If that’s all we have to do to get to racing, $2,000 to $4,000 a night to get us back to the racetrack, then I’ll be the first one in line to stick my hand up as an owner and say, ‘Yes, absolutely, I’m in.’”

Mike, who said he’s been betting on standardbreds since the early ‘80s, said missing out on the handle Mohawk and other Ontario tracks would normally be generating now is a huge problem.

“The money is going someplace else,” he said. “A gambler is going to gamble no matter what. If there’s a cockroach race in Tijuana, they are going to find it. So, what’s happening now, if you look at the handles of all the American tracks now that we’ve closed since the end of December, every handle in the U.S. has gone up. We’ve got seven million people, basically, from side to side in Toronto. You don’t need to be at a racetrack to bet, you’re betting online. Gulfstream handles are through the roof. Meadowlands is $3.5 million to $4 million on a weekend. Pompano, they used to bet $200,000 a night into Pompano and they are at $1.2 or $1.3 million. That money didn’t just fall off of a tree.”

Lawson, meanwhile, said both the Ontario Lottery and Gaming corporation (OLG) and Ontario’s Ministry of Finance have been “very supportive” during racing’s shut down. He is asking for patience in trying times.

“As I reflect on this period, I think everybody has to be patient. I know it’s hard. At the appropriate time, we’ll get going and I just hope that all effort we’ve made is going to put us in a position that they are considering us,” Lawson said.