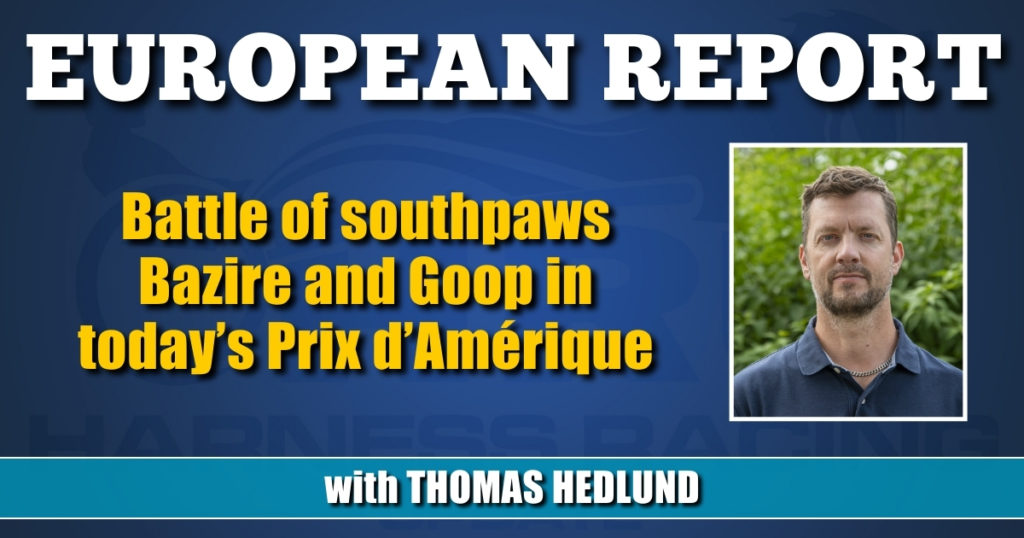 Will it be Jean-Michel Bazire behind his trainee Davidson du Pont, the runner up in Prix d’Amérique 2020, or Björn Goop with Sébastien Guarato’s champion trotter Face Time Bourbon, the defending champion, in today’s $1.2 million event at Vincennes in Paris?

Both are top drivers, with Bazire the dominant reinsman in France for more two decades and Goop a Swedish ”rookie” (on French soil) who has adapted his style of driving to French conditions in an impressive way.

The similarities between the two drivers is obvious as the Prix d’Amérique is set to go to post at 3:15 p.m. French time (10:15 a.m. New York time) in race 6 of a stakes-rich card (At press time, it was believed that you could watch the race via the official page at LeTrot here. It is also likely you can watch it through the Swedish betting site).

Bazire and Goop will be wearing green and yellow driving colors — Bazire with a red helmet. In addition, the match between Goop and Bazire is also a fight where two left handed drivers will do everything they can to win the big Grand Prix race at Vincennes.

The reports ahead of the race are positive from both teams. Guarato was interviewed by Swedish television on Saturday afternoon and the trainer from Normandie showed no signs of stress or pressure. Instead, he was pleased to have a horse who will be the favorite in the Prix d’Amérique.

”It feels better to have a horse that you know can win, but I still don’t feel any pressure from anyone. I know that my horse is in great condition and now it’s up to Björn Goop to do the job at the track Guarato said.

Bazire said he is also satisfied with the preparations ahead of the race today.

”I think that Davidson du Pont is better than last year, but that still doesn’t mean that we can beat Face Time Bourbon,” Bazire told sulkysport.se yesterday.

A wildcard in this year’s game is Swedish-bred Power. The 5-year-old Googoo Gaagaa son has all the attributes that’s required to be a serious threat at Vincennes. Trainer Robert Bergh spoke out on Swedish television on Saturday afternoon.

“We have nothing to lose this year. I wanted Power to try the French start system in the last start because my plan is, and has alway been, to have Power ready for real in next year’s Prix d’Amérique. So when he solved that without problems and later won the race, I felt like we could try Prix d’Amérique already this year and in my opinion he has quite a good chance to finish among the top four, five in the race,” Bergh said.

Bazire is the king of Vincennes and he warmed up by winning the $123,000 Prix de Luxembourg with his Dorgos de Guez (Romcok de Guez) on Saturday afternoon (Jan. 30). Richard Westerink-trained Frisbee d’Am flew to the lead when the car left the field of trotters and driver Anthony Barrier had to let Frisbee d’Am leave the field with nearly 50 meters midway through the race. Jean-Michel Bazire attacked in chase for first spot behind the leader with his Dorgos de Guez and at the home stretch, Bazire noted that Frisbee d’Am was disarmed. Still, Frisbee d’Am gave his all and finished as the runner-up. The two top horses will most certainly face a spring and summer where they enter stakes races in Northern Europe. They both possesses qualities that will make them interesting in, for example, the Elitloppet in May.

Back to Prix d’Amérique and thoughts about some of the horses in the race. Face Time Bourbon is the natural first choice, Davidson du Pont follows as second, but behind them it’s open. I think the two 5-year-olds Gu d’Heripre and Power are capable of winning the 2021 Prix d’Amérique and if Vivid Wise As gets his perfect race, he can upset and at least finish in the top three.