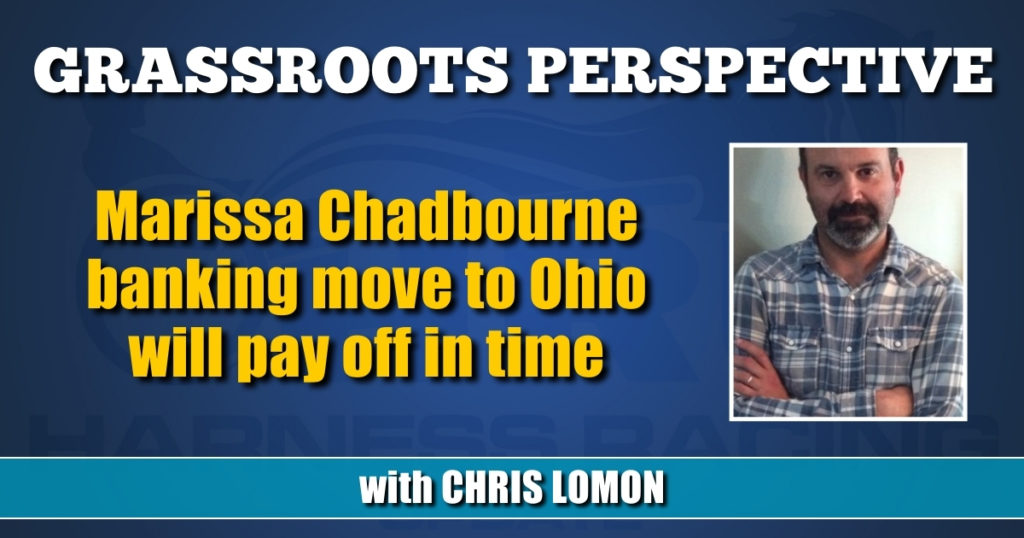 Marissa Chadbourne banking move to Ohio will pay off in time

Marissa Chadbourne is going to hit her best stride.
Although the numbers might suggest otherwise, the 2021 stat sheet for the young trainer doesn’t tell the entire story.

When she made the recent decision to move her standardbred operation from New York to Ohio, Chadbourne didn’t expect the change in scenery to yield immediate results for her seven racehorses and seven babies.

She did, however, embrace the belief that a patient approach would eventually pay the desired dividends.

“It’s very different here in Ohio,” said Chadbourne, who made the move with driver/owner Jimmy Whittemore Jr. “In New York, there just wasn’t anywhere to race. We had been talking about making a move here for a while, and it just seemed like the right time and the right place, so we decided to come to Ohio. I don’t think we’ve had what you’d term bad luck, but it’s different luck.”

The Maine-born conditioner isn’t about to bemoan the slow start in the Buckeye State.

Instead, Chadbourne believes the short-term pains could translate into long-term gains.

“The first week, the horses, they raced poorly – there’s just no other way to say it. The next week, they came around, but they were a step behind. I wouldn’t say they were short, but in certain places in the northeast U.S. or in Canada, there are times the horses can’t train as they normally would because of the weather. The tracks can be icy. Everyone else here is coming off racing at Dayton, so they’re race-tight and we’re a step behind. I feel like we’re playing catch-up a little bit, but we’re getting there.”

An encouraging result in mid-January, Chadbourne admitted, felt like posing for a photo in the winner’s circle.

“It might seem silly to get excited over a check, but the other day when we got one, it was a great feeling. We knew it was going to take some adjusting, for us and the horses. And it has.”

If Chadbourne ever needs a reminder of what she’s capable of, she need not look farther than her numbers in 2019 and 2020.

“We had 22 horses that year and everything just seemed to fall into place. It was a fantastic year.”

One of the horses that helped contribute considerably to her impressive campaigns comes in the form of Major Leaguer.

A bay son of Art Major (NY), the veteran pacer has been a moneymaking machine for Chadbourne and Whittemore (who owns the gelding that was bred by James Avritt of Lebanon, KY).

Major Leaguer won seven of his 22 dashes in 2020, a year in which he also took his lifetime mark of 1:50.1 at Plainridge Racecourse in Massachusetts.

“He raced some hard miles last year and the year before, but he’s given us a lot of great moments. He’s the best horse in our barn. We’re very, very lucky to have him. We’ve had him since he was 3. And he won 16 races the first year we had him. He was an on-the-whim buy. We never went to look at him, but a few people in racing called us and told us, ‘Don’t worry! Just buy him.’ So, that’s what we did. He’s given everything he has every year.”

Whittemore, who didn’t get to sit behind Major Leaguer for most of 2020 due to a hand injury, was back in the race bike for the veteran campaigner’s first start of this year.

Although the duo didn’t pick up a check, Chadbourne viewed the effort in the same regard as the choice to set up shop in Ohio.

“When you make a major decision in your career, things don’t always pan out right from the start. That goes for you and the horses. Obviously, you’re disappointed when you don’t get the results, but when you step back and look at the bigger picture, you get a sense of what needs to happen in order to achieve consistent success.”

A veteran son of Cantab Hall, the lifetime winner of 53 races and nearly $250,000 in career earnings delivered his trainer with a cherished career first.

“I’m lucky enough to call him mine. I took care of him as a younger horse. When we moved to New York, it wasn’t an option to buy him. When he came up for sale in 2018, Jimmy purchased him as a Christmas gift. We trained him back and after a few starts at Saratoga we decided to try Meadowlands. ‘Bold’ came through as a longshot and also landed me my first Meadowlands win [March 29, 2019]. He’s the perfect example of ‘love the animal and they will give you everything they have.’ He’s now 12 and seems happy to be doing his job, but when the time comes that he wants to retire he has a home for life.”

The gelding is one of many reasons why any challenges, starting with opting for the Ohio racing scene, don’t faze Chadbourne.

Not even a campaign that was impacted by a worldwide pandemic is enough to dampen her enthusiasm.

“We’re not down on ourselves,” said Chadbourne, whose foray into standardbred racing came through odds jobs when she worked for trainers in Maine. “It’s different and we need to understand that. If change was easy, everyone would do it and there wouldn’t be any issue. But change isn’t easy and there are always different ways of going about the end goal. If you try and push things, you might get a week where things go well, but I’d rather have several good weeks than one good week and then nothing for a while.

“I hope to figure out this Ohio circuit – classifications and the way they race here – and be here for a long time. I’m really looking forward to the babies. Racehorses are fun, but the babies are a lot of fun. We had Garretts Drama [a 3-year-old son of Art Major] and he got a little sore at the end of last year. Things didn’t always go his way, but training down, he was amazing. I’m interested to see what he brings back to the table.”

Chadbourne is just as interested – and motivated – to see how this new chapter in her career plays out.

She doesn’t expect to be a stranger to racing again in New York.

“Honestly, one of my biggest goals in 2021 is to make this Ohio move worth it. We don’t have to set the world on fire, but I just want to be worth it and learn something from out here. Last year was kind of a dud. I want to make this a go and not let us get discouraged. I think we’ll still have to go back to New York because we have some New York-breds, but I would eventually like to make Ohio permanent. We were looking at having eight-10 horses, but we have 14 with us. So, here we are… with more than we expected. But we’re not complaining.”

“Exactly. We know we’re going to be alright and it will just take time.”