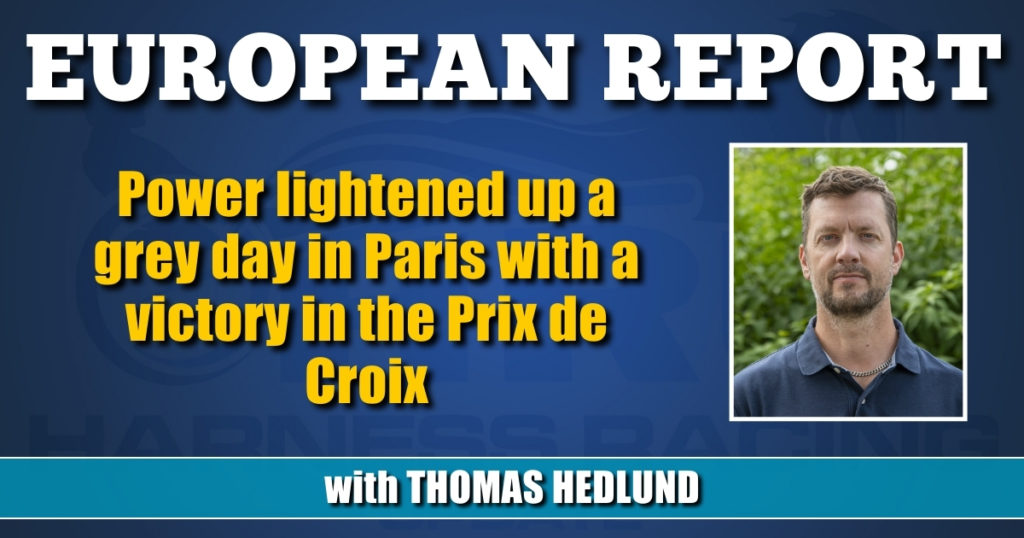 Swedish-bred Power (Googoo Gaagaa), trained by Robert Bergh and driven by Eric Raffin, was the answer in $121,000 Prix de Croix for 5-year-olds at Vincennes on Saturday afternoon (Jan. 16).

Raffin replaced Bergh in the bike and made no mistakes behind the talented and well-merited trotter. Power found fourth, fifth over in the 10-horse field and Raffin followed in first choice Gu d’Heripre’s up the backstretch, a move that resulted in a win by a nose ahead of quick finisher Gelati Cut and bronze medalist Goldy Mary.

The Prix de Croix was delayed 20 minutes due to a variety of circumstances and while horses were waiting for the start, Gu d’Heripre lost one of his shoes and he had to leave the track, which most certainly was a factor in his performance.

Snow in Paris made the track a bit sloppy and the conditions were not satisfying for anyone around the black surface in Paris.

But Power’s strong finish from position in the back of the field, among horses that already secured spot in Prix d’Amérique (Gu d’Heripre), was a positive for Bergh, who opened up for a possible entry in Prix d’Amérique.

”The door isn’t closed anyway. I have to think about it,” said Robert Bergh to Swedish television after the victory.

French top drivers Franck Nivard and David Thomain had to stay home from the races at Vincennes on Saturday’s card since they’ve both tested positive for COVID-19.

Jean-Philippe Dubois had the best horse when the $121,000 Prix Gelinotte for 3-year-old fillies was held at Vincennes on Saturday’s (Jan. 16) race card.

Dubois’ Inoubliable (Prodigious) swept the entire field and landed first over with a little less than a kilometer to go in the 1.6 miles long race. From outside the leader, Inoubliable was unstoppable and this was a very impressive performance from a 3-year-old filly.

The track was not easy to master but Inoubliable showed that she can handle any kind of surfaces and she noted her third consecutive win at Vincennes.