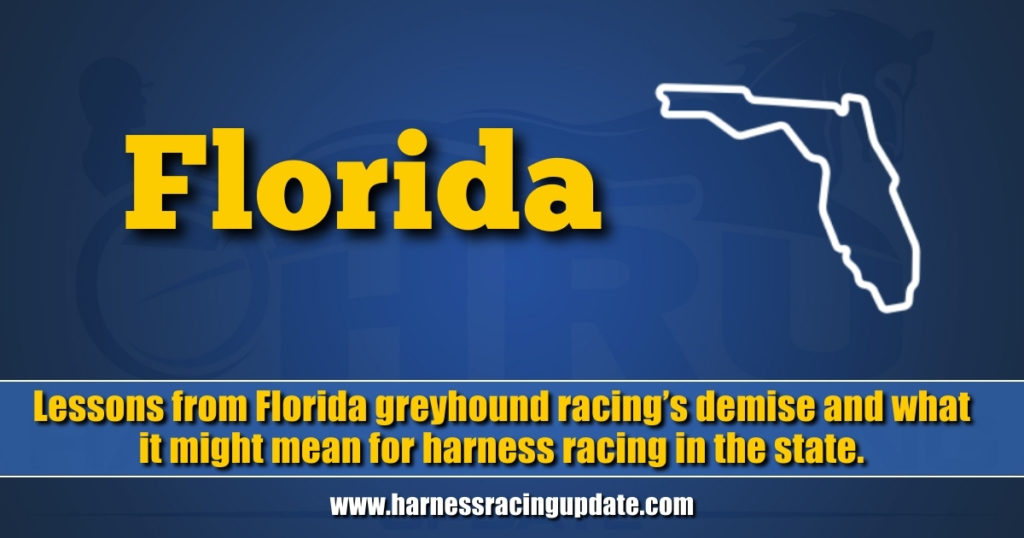 Lessons from Florida greyhound racing’s demise and what it might mean for harness racing in the state.

Florida greyhound racing finally caught the lure on Dec. 31, 2020, just a year and three months shy of its centennial. The Miami Kennel Club held its first races March 1, 1922, before Florida became the first state to legalize pari-mutuel greyhound racing in 1931. Seventeen Sunshine State dog tracks were operating by 1962. Although it remained a popular American wagering and spectator sport into the 1990s, drawing an all-time-high nation-wide handle of $3.5 billion in 1991, greyhound racing came under increasing scrutiny. The People for Ethical Treatment of Animals (PETA) was founded in March 1980; the animal rights group lists greyhound racing alongside bullfighting, cockfighting, rodeos, and hunting in the “cruel sports” section of its website.

Racing itself was conflated with cruel practices to which some dogs were subjected: lengthy confinement to cages; training with live animals as lures; overt abuse and neglect; inhumane killing of puppies and dogs unsuited to competition. None of this was part of greyhound racing, per se; it was far removed from the stewardship recommendations of the American Greyhound Council (AGC). That organization was founded in 1987 by the National Greyhound Association (NGA), representing breeders and kennel operators, and the American Greyhound Track Operators Association (AGTOA), with an expressed mandate to “ensure the welfare of racing greyhounds on the farm, at the track and upon retirement.”

In November 2018, a bipartisan majority (69 per cent) of Floridian voters backed a ban on greyhound racing. Amendment 13 had needed a 60 per cent majority to pass. The News Service of Florida quoted Chief U.S. District Judge Mark Walker’s decision:

“Through Amendment 13, Florida has prohibited plaintiffs’ property [i.e. racetracks] from being used in a particular manner that the state has determined to be contrary to the health, morals, or safety of the community. […] Whether Amendment 13′s purpose was to protect the health and welfare of racing dogs or to prohibit wagering on dog races, Amendment 13 is a legitimate exercise of Florida’s police power [regarding animal control and gambling regulation].”

A subsequent challenge by industry participants and a group named Support Working Animals Inc. was filed in federal court in May 2020. It alleged that greyhound industry participants were “singled out for a deprivation of their rights based on political animus.” Judge Walker dismissed the suit last June. Support Working Animals took the case to the U.S. District Court of Appeals for the Eleventh Circuit in July, without success.

What does this have to do with harness racing?

While Florida is a popular winter training destination for standardbreds, Isle Casino at Pompano Park is the only pari-mutuel harness track in the state. It is the last of four harness tracks to have operated in Florida. Tropical Park in Miami, Ponce De Leon Raceway in Bayard, and Azalea Driving Park/Seminole Park in Casselberry are long gone. Ponce de Leon Raceway’s final incarnation was as St. Johns Greyhound Park; Azalea Driving Park became Seminole Park and then Seminole Greyhound Park. Tropical Park first opened as the South Miami Kennel Club in Coral Gables, switching to harness racing in 1967 and closing in 1972. The “new” Pompano Park opened for pari-mutuel harness racing in 1964, after a decade of existence as a training centre. An earlier one-mile track existed on the site in 1926, but quickly closed due to a then-statewide ban on pari-mutuel wagering.

In the September 2015 issue of The Florida Horse magazine, decoupling was demystified by Florida Thoroughbred Breeders and Owners Association (FTBOA) CEO/executive vice president Lonny T. Powell: “In a nutshell, decoupling means a race track in Florida would have the option of dropping all or most of its live racing while still keeping (or expanding) its slots and poker room facilities and seeking authorization for future gaming products from the Florida Legislature.” In a public statement in 2017, Florida Standardbred Breeders and Owners Association (FSBOA) president Joe Pennacchio likened decoupling to “a cancer cell” that would damage the wider racing industry if ever allowed to take hold in Florida.

For years, it has been rumored that each season would be the last at the Winter Capital of Harness Racing. Eldorado Resorts has owned Isle Casino at Pompano Park since 2016. In 2018, the company issued a media release about its plans (with Cordish Companies) to redevelop the site into “Live! Pompano Resort,” which would replace harness racing with pari-mutuel jai alai. Eldorado merged with Caesars Entertainment in 2019, which did not change the plans for redeveloping the track. The COVID-19 pandemic slowed the process, and also led to an approved amendment that would see industrial/warehouse space replace offices in the proposal.

All racetracks are vulnerable: Gulfstream Park West (formerly Calder Race Course) conducted its final card of thoroughbred racing on Nov. 28, 2020. In May 2019, the South Florida racino had been approved for pari-mutuel jai alai, which allowed owner Churchill Downs Inc. to continue to offer legal casino gaming without racing. PETA is a shareholder in Churchill Downs Inc., and last year purchased shares in four other companies that own U.S. racetracks: VICI Properties, Boyd Gaming Corporation, Penn National Gaming, and Gaming and Leisure Properties.

The end of racing at Gulfstream Park West echoed the dangerous message of the state ban on greyhound tracks: Eliminating horse or dog racing, with its associated costs and infrastructure, not only freed up real estate; it also freed gaming companies from controversies about animal rights and welfare.

Despite these recent changes to racing in the Sunshine State, Pompano has started 2021 strong. On Jan. 6, track announcer and Caesars Entertainment director of racing Gabe Prewitt tweeted: “Back to back $1M nights for the first time in the history of Pompano Park! Over $1.3M last night and over $1.1M tonight! THANK YOU to all of our players for storming the pools!” On Jan. 5, he had taken to social media to promote “the largest guaranteed pool in Pompano history tonight, fueled by a $28k carryover in the 50c Pick 5 beginning in Race 1.”

But handle isn’t necessarily the key to keeping a racetrack alive. Not anywhere, not anymore. Not when public and political support is perhaps the more powerful influence when it comes to land use and gambling.

Florida Amateur Driving Club president Dein Spriggs said that he didn’t think greyhound racing had the following that harness racing has in the state. When the last dog tracks closed, “they were pretty much prepared for that to happen. It just kind of fizzled out, as far as greyhounds go in Florida. The final night here in Palm Beach County was at Palm Beach Kennel Club. You really didn’t hear too much about it. It was kind of quiet, other than they had a big night there.”

The USTA director and past president of the FSBOA noted that “Palm Beach Kennel Club kept right on rolling” even as other venues closed their doors, but ultimately greyhound racing “went to a referendum of the people, and the people knocked it out.”

Amateur driving clubs have gone the extra mile to promote harness racing as a good corporate citizen, although racino owners don’t always return the favour. “I can tell you what we do, with the [Florida] amateurs,” Spriggs told HRU. “We bring people in that have never, ever been to the racetrack in their life. They have no idea what’s going on. They’ve never seen it.” He said that club members take pride in spreading the good word about their sport: “A lot of the amateurs, that’s what they do. Their goal is to bring in new people. They have an outside life; most of the [professional] horsemen, they live and breathe horses, they are there every single day, and don’t have time or see outside of the horse circles. A lot of the amateurs, they’re into other businesses, so they bring their friends over for the races and show them what’s going on.”

The Florida Amateur Driving Club also builds community goodwill through its dedication to fundraising for good causes. “We’ve given a lot of money to charity,” said Spriggs. “One of our big things is we do a ‘Miller-Tetrick Pro-Am’. We’ve done it for the last five years. Dave Miller and Tim Tetrick come down, and we’ll donate to a couple of different charities. Tetrick will have three guys on his team, and Miller have three or four on his team, and we’ll race three or four races, and we generate dollars for different charities.” Last March, Team Tetrick won the title, and each team presented a check for $4,000 to its respective sponsored charity, the Make-A-Wish Foundation (Team Miller) and New Vocations (Team Tetrick).

The club’s generosity doesn’t stop there. “We have other charities that we donate to, in the meantime,” said Spriggs. “Basically, we put our 5 per cent driving fees in a pool, and we select charities every so often, and we donate in the winner’s circle. So we [amateur drivers] don’t keep any of our fees; every dollar goes to charity.” Pompano winner’s circle presentations often mean horses and drivers posing with representatives from charitable organizations. “Some people come in there who didn’t even know about [harness racing], and they love it! They’re amazed. They have a great time, and we make them a part of it,” said the club president, who is a two-time National Amateur Driver of the Year. Incorporated as a not-for-profit in 2010, the FADC has raised over $200,000 for various charities.

Also working to the advantage of harness racing’s public image is the standardbred itself.

The much greater prevalence of breakdowns in thoroughbred and greyhound racing have made these industries targets for anti-racing lobby groups, said Spriggs. “Our horses are very durable; they don’t break down hardly at all. It’s not even close. It’s such a different situation, totally.” The anti-racing movement has nonetheless gained momentum in an era when racinos rarely counteract its messaging by advertising their own live product. “If you discover the horse racing, you did it on your own or someone brought you there,” said Spriggs.

Land redevelopment and decoupling in favor of jai alai are the most pressing priorities for Florida’s one pari-mutuel harness venue. Spriggs said he doesn’t think harness racing is facing the kind of public opposition that contributed to the demise of greyhound racing in the state: “Look, if somebody spends a lot of money and they put the wrong kind of press out there, anything can happen. But the greyhound [industry] had a lot of negative things going on, so that was just totally different. You had PETA going against them; everybody was going against them. Now, is PETA our friend? No, not really. They don’t like any kind of animal racing. They would rather see people pulling people. They would like to eliminate thoroughbreds, harness racing, anything that’s animals.”

Greyhound racing’s poor public image and diminishing handle played into each other in Florida, leaving few defenders against decoupling. After multiple dogs competing at Florida’s Bestbet Orange Park tested positive for cocaine in 2016, it was dubbed “the largest greyhound drug case in American history” by an anti-greyhound racing organization, Grey2K USA. In 2017, a state senator remarked that “it makes little sense to require under law an activity that no one wants to watch and many people consider inhumane.” In the end, there could be no recovery for Florida’s greyhound tracks. Only four states — Iowa, Arkansas, Texas, and West Virginia — still conduct dog racing; Southland Greyhound Park, the only venue in Arkansas, is phasing it out by December, 2022.

Pompano races on, its future undetermined, but at least not determined by public opposition emanating from anti-racing groups. “In their minds, we’re next,” said Spriggs. “But don’t know if we’re at that juncture yet. I don’t see that, at the moment.”