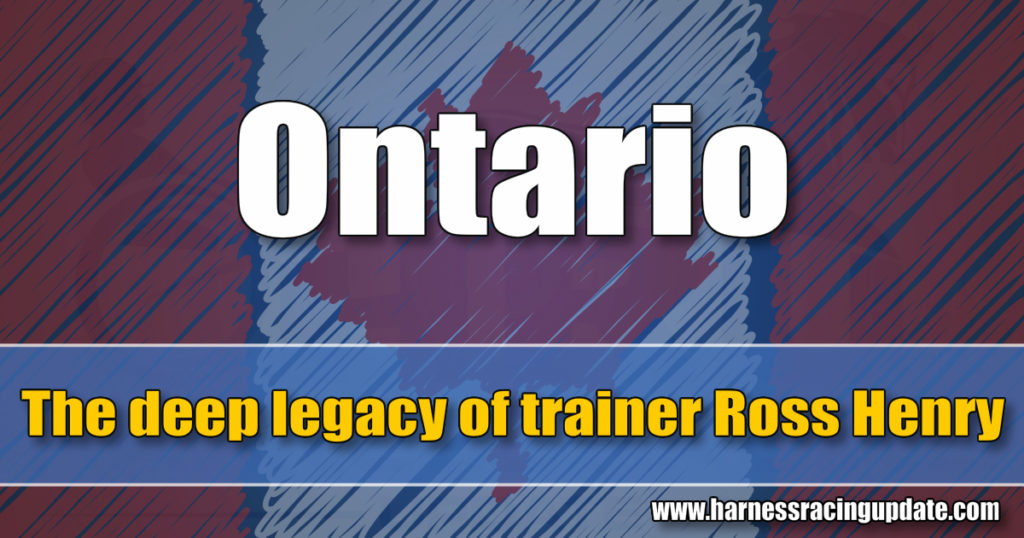 The five-time winner of the Ontario Sires Stakes’ leading trainer award was the influential patriarch of a successful racing family now in its third generation.

When Ross Henry purchased his first horse in 1965, he almost certainly had no idea that he was setting out on a journey that would see him earn five Johnston Cup titles as the top trainer in the Ontario Sires Stakes (OSS) program, result in three generations of family members enjoying successful careers in harness racing and have friends and family from Florida to Ontario sharing countless stories and memories on his passing at the age of 91.

Born in Kerrobert, SK, Henry lived from the age of two until his Dec. 19 death in Arthur, ON. After spending his early years farming, and likely in spite of some misgivings from his parents George and Viola, he made the leap into harness racing with a pair of horses purchased from eventual Hall of Fame member Earl Rowe.

The late Ontario trainer Ross Henry with Royal Angel in 1998.

Like most horsemen of his generation, Henry trained and drove his own horses through the first decade of his career, but a serious driving accident at Hanover Raceway convinced him training was a wiser career choice and saw him hand the lines over to son George and catch drivers such as Bill Cass.

“I started driving Ross’ horses in the early ‘70s in Orangeville,” said Cass, who celebrated his 79th birthday on Dec. 31. “And Priscilla and I, my wife and I, who I lost a couple of years ago, we were friends with Joyce and Ross. Every Saturday evening they’d come in from Arthur and have dinner with us at our house and then Sundays I’d be driving his horses.

“We raced at all those tracks, Owen Sound, Hanover, Orangeville; we were always on the go somewhere. He was good horseman, Ross, and a good fella. Geez, he was a good fella.”

Cass said the whole Henry family, sons George, Brian, Wayne, Paul and Trevor and daughter Sharon, helped him and Priscilla with the ins and outs of operating their first farm, but noted their expertise on agricultural matters was not universal.

“When my boys (the late Jimmy and Joey) were seven and eight years old they wanted chickens, so my wife went down to Snelgrove and came back with a dozen chicks. We had them in the basement under the lights and they couldn’t wait for Joyce and Ross to come on Saturday to show them the chicks,” said Cass. “So when Joyce and Ross came they went downstairs to look at them and she come up laughing and Priscilla came up pretty sad and I said, ‘What’s wrong?’ And she said, ‘Ross and Joyce said they’re roosters.’

“Well to make the story straighten up, as soon as they grew up those 12 roosters laid an egg every day. They were god-damned chickens, they weren’t roosters! It was funny and I always teased both of them about it. We had a lot of good times together.”

When Cass started driving for Ross, the trainer had both pacers and trotters. In fact, his first OSS win in 1974 was with pacing filly March Marian (Keith Abbe–Widow C Hal) who remained a favorite throughout his career. It was a pair of hard-to-gait acquisitions and the arrival of stallion Orbel G G (Speedy Crown—A Cs Lin) to the Arthur farm that provided the spark that saw Ross shift his focus to trotters in the latter stages of his career.

“Ross’s preference for trotters came by way of Orbel G G,” said Trevor and Shannon Henry. “Speedy Tatler (Speedy Rodney–Gracious Gift) and Porters Demon (Porterhouse–Demons Queen) would also be credited to Ross preferring the trotting gait. Those two horses were brought to Ross as their trainers couldn’t get them to go and he was successful at turning both of those horses into racehorses. The thrill of getting one to ‘stay flat’ then became an addiction.”

Stallion Orbel G G is the first horse that comes to mind for trainer Gregg McNair when he thinks about Ross’ long career.

“Orbel G G horses, it seemed like they raced a lot of them and they’d go around any size of track. When they’d bring them to the track they sure had them ready to go good and early and they minded their manners. I don’t know what their average was, but they seemed to get most of them to the races,” said McNair. “Dad (Bob McNair), he bred a few mares to Orbel G G, and he said to Ross he had trouble finding him to breed to and Ross said, ‘We just don’t advertise him too much. I really don’t like racing against them.’”

McNair, who would go on to four Johnston Cup titles of his own, also recalls how welcoming Ross was to a young man getting his start in the business. “He always made sure he’d say ‘Hello’ to you when you were younger. Guys remember that.”

In the mid-1980s, Ross and long-time owner Ray Odorico purchased land in Okeechobee, FL and built a winter training centre, which soon lured visitors from Ontario, including McNair, who purchased his own farm near the town a decade ago. Visitors were welcomed into the house and often into a jog cart, but as Ross neared retirement and his vision started to wane they were warned to stay out of his lane on the outside of the track.

“As his sight began to worsen he still loved to jog horses, so in Florida the track had deeper sand on the outside and he could have a track made with each horse he drove, wheels perfect in a line,” recalled Wayne and Shelley Henry. “He would know if someone was trying to follow his path messing up his wheel ruts.

“I have to say he was a man of great patience when it came to handling a horse, especially trotters. He could handle any type of horse; it must have been ‘in the hands.’ We were talking the other day about training babies with some fellow horsepeople and I mentioned that dad never carried a stopwatch until well into early spring, just let them do their own thing. Maybe that’s why he was successful with the young trotters, lots of foundation into them.”

McNair recalled following the family around Ontario one weekend as they won 11 of 15 OSS events they entered. Ross, always modest in his expectations, never took success for granted and Wayne recalled one outing that did not work out quite as well.

“I remember taking 12 or 13 fillies to Rideau one summer for a sires stake. I think they were 3-year-olds, shipped them in with the one owner’s transport. It was a big night having that many in, but what a terrible night it was. I think we snagged one third out of the whole ordeal,” he recalled. “I can remember dad sitting on a pail when all was said and done not saying one word, not a word about how bad the night was.”

When he retired from training horses in the spring of 2006, Standardbred Canada credited the horseman with 533 wins and $7,135,137 in earnings; however Ross got his start in harness racing well before the launch of modern record keeping so those numbers are only a fraction of what the trainer accomplished.

“He certainly wasn’t anybody to brag about his accomplishments, he just went about his business and expected to have results based on his work ethic and his knowledge of the horses,” said Brian Tropea, whose father Norm trained off the Henry farm while building his own facility in Arthur in the early 1970s. “It’s a testament that the family farm is still there and they’re still training horses. He’s left a legacy. He set his family up in a good position to be successful in the business that he loved. If we can all do that we’ll have a successful life. You’re not often judged by what you did, it’s what you left behind and he certainly left a legacy behind.”

Ross’ family gathered to celebrate his legacy on Dec. 23. The obituary and service can be viewed here.