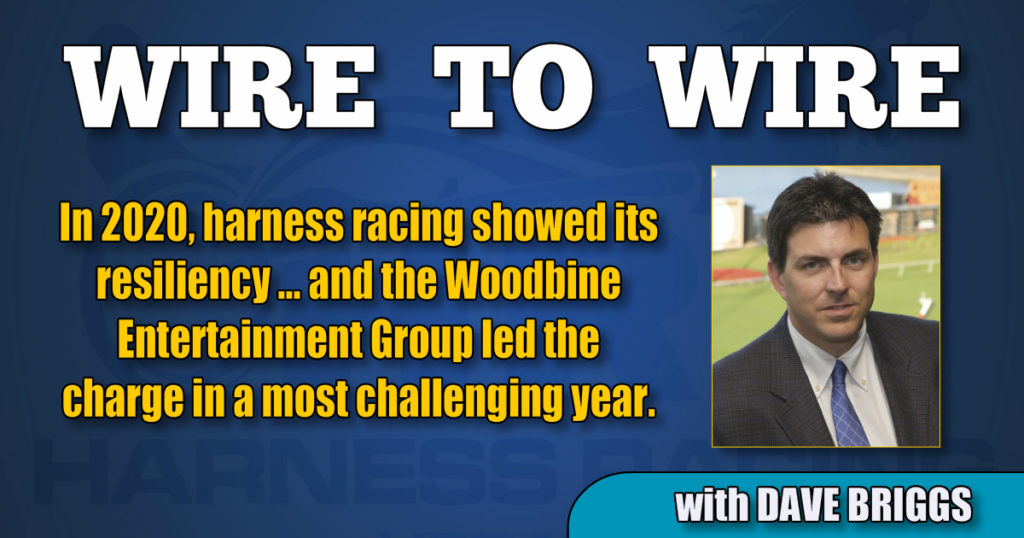 In 2020, harness racing showed its resiliency…

… and the Woodbine Entertainment Group led the charge in a most challenging year.

Harness racing’s famed resiliency was put to the test in 2020. But even in an extremely trying year,the industry deserves kudos for continuing to function at a remarkable level considering so many other businesses struggled to operate at all during the pandemic.

It helps, of course, that harness racing is conducted outside and requires relatively few participants for each race to be contested. Yet, even compared to other outdoor sports, harness racing, for the most part, managed to shine as an example of how to operate safely and effectively.

That’s what makes the current lockdown in Ontario so frustrating. Despite the fact the Woodbine Entertainment Group (WEG), in particular, proved to be a global leader in how to operate safely during a pandemic, all horse racing in the province has been halted. It’s just another example of inconsistent and illogical rules being applied by pandemic politicians that close some businesses and allow others to thrive.

If 2020 is any indication, the harness racing industry in Ontario will get through this latest challenge. It won’t be pretty for some that rely on that racing income to stay afloat, but I hope and believe most will find a way to survive.

The year 2020 was also a good example of that old adage that one’s true colors will appear when faced with adversity.

Woodbine stepped up mightily to help all of horse racing in 2020 and I hope those efforts leads to much less knocking of WEG — a tired old mantra that stretches back through the mists of time to when the company went by the name the Ontario Jockey Club and was alleged to favor its thoroughbreds. The oft-repeated line is that WEG doesn’t care about harness racing, doesn’t care about other horse racing outfits in Ontario and doesn’t care about the plight of horsepeople.

Nothing could be further from the truth.

That was never more evident than during what turned out to be the last card of 2020 at Woodbine Mohawk Park. On Dec. 23, two days after the city of Hamilton went into lockdown forcing the closure of Flamboro Downs and the cancellation of Dec. 22 card already drawn, WEG offered to take the races at Mohawk with a special afternoon card prior to its own night card to help the Flamboro horsepeople. That the afternoon card was ultimately scratched due to poor track conditions caused by weather isn’t the point. The point is WEG went out of its way to help the greater horse racing community and it wasn’t the first time in 2020.

WEG routinely advertised and promoted racing at other Ontario tracks.

It took some schedule juggling, but despite two shutdowns of racing, WEG still managed to stage its major stakes races in 2020, including the inaugural Mohawk Million, which was a success when the metrics are adjusted for the global health crisis that kept patrons away.

During the pandemic, in sharp contrast to some casino tracks in the U.S. that made little effort to return to racing, WEG not only lobbied the province to get horses back on the track, it also successfully lobbied national sports network TSN to broadcast both standardbred and thoroughbred racing on a weekly basis giving the sport tremendous exposure to the benefit of all.

At the same time, WEG also launched new betting app DarkHorse as a further tool to try to draw more bettors to its product.

All this while imposing strict COVID-19 safety protocols at Mohawk designed to keep the horse and greater community safe and the races rolling.

WEG CEO Jim Lawson and senior vice-president of racing Jessica Buckley and their team deserve a lot of credit for all of it.

Proving, hopefully once and for all, that WEG is not the enemy some horsepeople sadly still believe it to be.

In 2020, we were also fortunate to have the Hambletonian Society, which managed to stage most of its events, including all of its classics. That was no easy feat and, all things considered, the Hambletonian at the Meadowlands and Breeders Crown at Harrah’s Hoosier Park were both great events despite few spectators and the enhanced safety protocols.

Both the Meadowlands and Hoosier deserve kudos for their work to stage those and other events.

That the Katz-Libfeld Partnership’s Breeders Crown Charity Challenge managed to raise more than $125,000 for charity during this awful year — and has raised more than $400,000 in two years — is a testament to the heart of this industry.

Kudos, as well, to all the sale companies that found different ways to still stage horse auctions in 2020; sales that are vitally important to the industry’s breeders. That the results were not off as much as many predicted is proof many still see a viable future for harness racing.

But perhaps the most notable positive development in 2020 came in March when some 30 people were indicted by the U.S. Attorney’s Office for the Southern District of New York for alleged doping violations. If the sport is to have a sustainable future it has to seriously address those within it that harm horses to enrich themselves by cheating both their fellow horsepeople and the betting
public.

Those arrests were just the start, as is this list of positives from 2020. I’m sure I’m missing some other notables.

But what I did mention suggests not everything in 2020 was as dark and dire and depressing as it first seems — though, let’s not kid ourselves, 2020 wasn’t fun.

Yet, the sport wasn’t decimated as some predicted.

Rather, it showed its resiliency.

Giving us something to build on for 2021.

Here’s hoping for better days ahead.