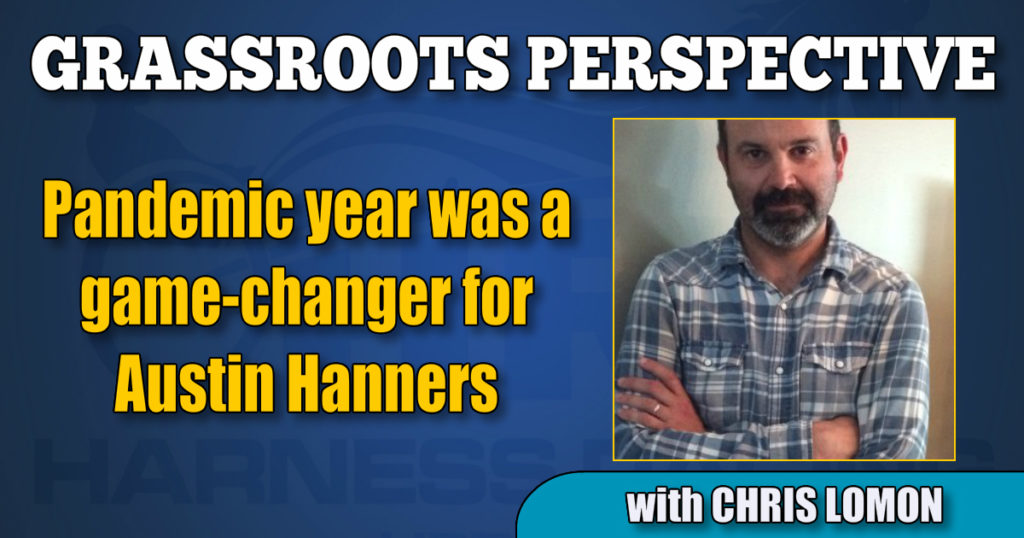 Pandemic year was a game-changer for Austin Hanners

Austin Hanners never would have believed a pandemic could be a game changer for his driving career. But that’s exactly what happened.

In a year that has yielded career-best numbers across the board, the 21-year-old reinsman is somewhat reluctant to point out a major reason for his 2020 success story.

It’s understandable why he would feel that way.

“I would actually say, as strange as it seems, that the coronavirus has helped me the most,” said Hanners. “I went out east – my mother [trainer, Alicia] and brother [trainer/driver, Luke] moved to Delaware – to help them with the horses and other stuff as well. When I came back to Ohio, I started driving for some new people, and I also drove at The Meadows a little bit. I was getting a little more exposure since I started driving at a few more places. When I got back to Ohio, I was doing as well here as I did out east. I think getting my name out there has had a big impact on my career.”

Getting the opportunity to drive for new owners has translated into more confidence in the race bike and more chances to drive higher-caliber horses.

“I’m starting to drive for some powerful stables and that makes a big difference. When you’re not going out on 30-1 or 40-1 horses all the time, you give yourself better odds to win or hit the board.”

Bigger numbers haven’t resulted in an inflated ego for Hanners, who remains his own toughest critic.

One of the most impactful lessons he’s learned about his craft: narrowing the lens.

“Just to take each race one at a time is what I try to do. When I get upset at what’s happened or something I’ve done, I just try my best to move on to the next race and forget about that one. Even if I go to a different track, I can’t let what happened at the track before affect what I’m setting out to do.”

Such an approach isn’t always easy to navigate.

“No, it isn’t,” Hanners said with a laugh. “It’s much easier said than done.”

One thing that the young horseman doesn’t struggle with is setting goals.

Rather than jot down numbers he wants to achieve each year, the son of late long-time driver/trainer Brad Hanners (who passed away from cancer in 2015) prefers a different approach in determining what makes for a successful campaign.

“For me, it’s more about personal achievements, look-in-the-mirror kind of goals… to feel at the end of the day that you did better than the day before. I definitely want to win more races than the year prior, but I just think that if you are able to be better every day, those numbers will come.”

In 2016, his rookie season, Hanners recorded one win and posted five top-three showings in 17 starts. One year later, he made four trips to the winner’s circle, increasing the total to 24 in 2018. After a tough 2019, when he won six races, this season has produced over 30 victories and nearly $280,000 in purse earnings.

There have already been a few highlights in his young career.

“My actual first chair drive was in 2017 with a horse called Rehab Mountain,” said Hanners of the bay trotting son of Duke of York (ON). “Dad trained the horse, and I drove the horse in my dad’s memorial race at his hometown fair. My first pari-mutuel drive came at Northfield Park in 2017, about a week or so after I turned 18. I had enough qualifiers in the fairs about a year and a half before that.

“A buddy of mine actually gave me the chance to drive a couple of his horses at Northfield. On that night, I actually hit the board in my first drive, which was big for me. Getting that confidence under my belt was huge. It made me feel like I belonged out there. Most of the guys you go up against are more seasoned and have much more experience, so you have to realize that you need to learn something each time you’re out there. If you want to feel like you belong, you need to do the right things to believe that. It’s the only way you’ll get the skills and experience you need.”

Away from the intensity of the racetrack, Hanners’ first hobby of choice is shooting hoops.

While putting up points isn’t his forte, preventing them is a skill that dates back to his elementary school days on the basketball court.

“I like to run a lot, but basketball is my favorite thing to do outside of driving. I think that’s pretty much the only thing I do when I’m not racing. I guess defense if the best part of my game. I’m not a big scorer and I never was. In the mornings, I’ll go out for a nice run, but there really isn’t much time to do anything when you’re in this industry. But I love this industry and I feel lucky to be part of it.”

Although he won’t chase a particular number in the win column, he will strive to make it his best year in the sulky.

Hanners will also continue to take each race as it comes.

“Things are a lot easier when you’re in more than a couple of races. It’s definitely tough when you just have one or two drives on the night. When you have six, seven or more, it makes it much easier because you don’t have any time to think about what happened the race prior. You shift your thoughts to the next race. I guess it’s when I feel I messed up on my last drive of the evening – that’s when it stays with me a little longer. But I’ve done much better with that over time.”

It’s also one of many reasons, COVID-19 not included, why Hanners continues to draw attention to his on-track talents.