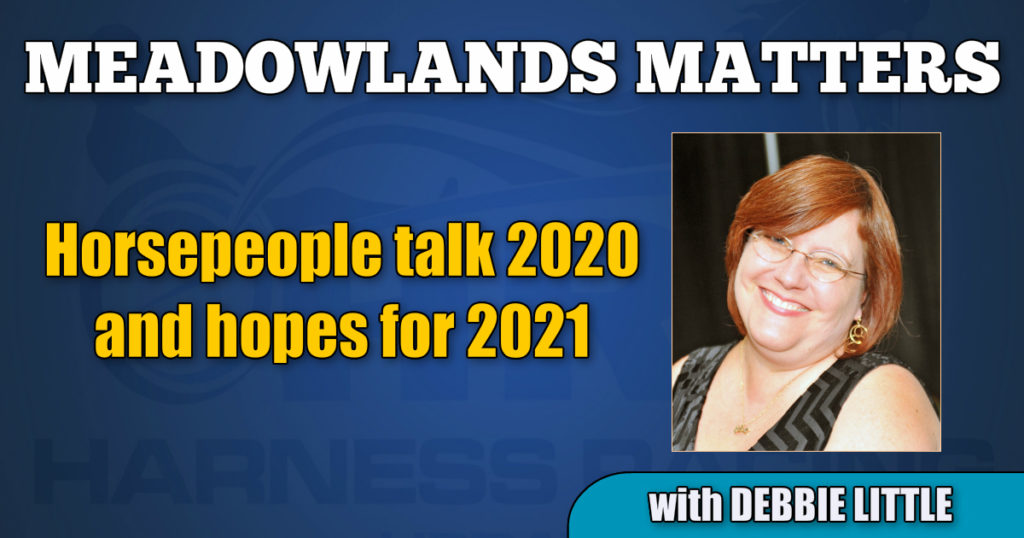 Best memories of 2020, what they most want to do when the pandemic is over and much more.

To celebrate the New Year, I’ve asked some Meadowlands trainers and drivers the same four questions. Hopefully, this will become a yearly column – minus the COVID-19 references.

2. Have you ever made New Year’s resolutions and did you keep them?

1a. “Probably the best memory on the track is our horse (Venerate) winning the Mohawk Million. Obviously, I wish it had been me driving him but the way it ended up, it worked out okay.”

1b. “Spending more time with family, that’s been good.”
2. “The obvious ones like lose weight or exercise more, but everybody makes those. As far as New Year’s resolutions in the business, I don’t try to hold myself to something like that. You just want to stay healthy and hopefully have another successful year.”

3. “Usually, we’ll take a trip [out of the country], maybe to the tropics somewhere, and this winter, we’re not going to do that. We enjoy spending a week where it’s warm and hopefully we can do that again next year.

4. “Of course, I have lots of things I’d like to accomplish. Obviously, I’d like to win some of the biggest races, but that’s a yearly wish. [2020] started off a little slow but ended up very good and hopefully 2021 is a strong year for us.”

1a. “I think winning the Kentucky Futurity with Amigo Volo. That’s a race that everybody loves to win and I’ve never even had a horse in it let alone win it.”

1b. “I just moved to [Ketcham Farm], a little private farm and it’s got a half-mile track and it’s worked out great. I really enjoy it. You feel like you’re at home every day.”

2. “Not one that’s turned out. I usually make one the day after [New Year’s Eve] that I’m going to give up drinking.”

3. “Well, obviously, travel. For example, I’m from New Zealand and I wouldn’t have been able to get back to New Zealand this year, which we have done in the past.”

4. “Nothing in particular. I’d like to be consistent. I’d like to stay healthy, obviously. I’d like to keep things going the way they are. I love training horses.”

1a. “I should say Venerate first just because it was the million-dollar race, but it just was so disappointing not to be there. So, I’d probably have to go with Love A Good Story with the [Filly] Futurity. Being a New York girl, I feel like she kind of got underrated all year and I think she finally proved herself on a mile track that day that she was one of the top ones in the country.”

1b. “Probably my son, Tyler. Watching him mature. He’s loving driving. He got me my 2,000th [training] win. He’s really coming into his own in this sport and he loves it.”

2. “I’m sure I have in the past but I failed miserably by January 15th. If I would say one this year probably would be to have better posture and I think that could be attainable. And to not swear so much.”

3. “Ever since we moved to New Jersey, every year as a family, we would go see the tree and go to dinner in [New York] City. And that tradition got ruined this year. This is the first year we’re missing that since 2006.”

4. “I’d sure like to win the Hambo and get that off the list. I’d like to see the restrictions lessen and people would be able to move around and stay healthy doing it. My next bucket list big trip is I’d like to do Thailand.”

1a. “Beating Tall Dark Stranger in the Breeders Crown. On a daily basis, it felt more consistent and better aside from not having that one dominant horse. Across the board, I had good horses all year.”

1b. “One night in Lexington I had dinner with [Tim] Tetrick, [David] Miller and Mark MacDonald. Breaking down everyone’s list of top drivers. No mics/cameras/media, just raw honesty. A convo I’ll never forget.”

2. “I used to. When I was like 20 to 24, I was so fixated on the amount of wins and earnings I had. But through time I’ve realized that I’d rather just have progress than anything else.”

3. “I do miss going to movie theaters. Vacations, too. I know some people travel but you’re still worried about restrictions that they put everywhere.”

4. “The only goals I have are certain workout weight goals. Ideally, I’d like to bench press this or squat this. That’s about the only goals I’ve set. I feel like you have to set goals or it’s really hard to push the envelope.”

1a. “My best thing from this year, even though the pandemic is horrible, a little bit of a silver lining was I did get to spend three months at home with my son and that felt really special to me. For nine months of the year I’m working seven days a week, so it was a little treat to actually get to be home day after day.”

1b. “I went back to Illinois for their Super Night and a couple of their stakes nights leading up and that was a lot of fun. It was kind of a little homecoming retreat and I was able to make a little bit of money, too.”

2. “I used to always make the resolution that I wanted to win more races the next year than I did the year before. But I stopped doing that when I moved to the East Coast.”

3. “[Skiing is] my favorite thing to do outside of work. I end up going by myself a lot and one of the fun things that you do is ride up with people that you don’t know on the lifts and you chat. And now you have to be alone or on the lift with your party. So, you miss out on a lot of that comradery you get with strangers.”

4. “Not a specific race or anything, but I would just like to get hooked up with a legit Grand Circuit horse. It’s been a couple of years since I’ve had one that was competitive on the big stage and I would like for that to work out.

On a personal note, I’d like to share my best moment of 2020, which was when HRU asked me to write this column.

The month before, I had been in the hospital battling COVID-19 and was just starting to feel like myself again when this opportunity came my way.

To everyone who has taken the time to speak with me, I love sharing your stories and want to thank you for trusting me to do so.