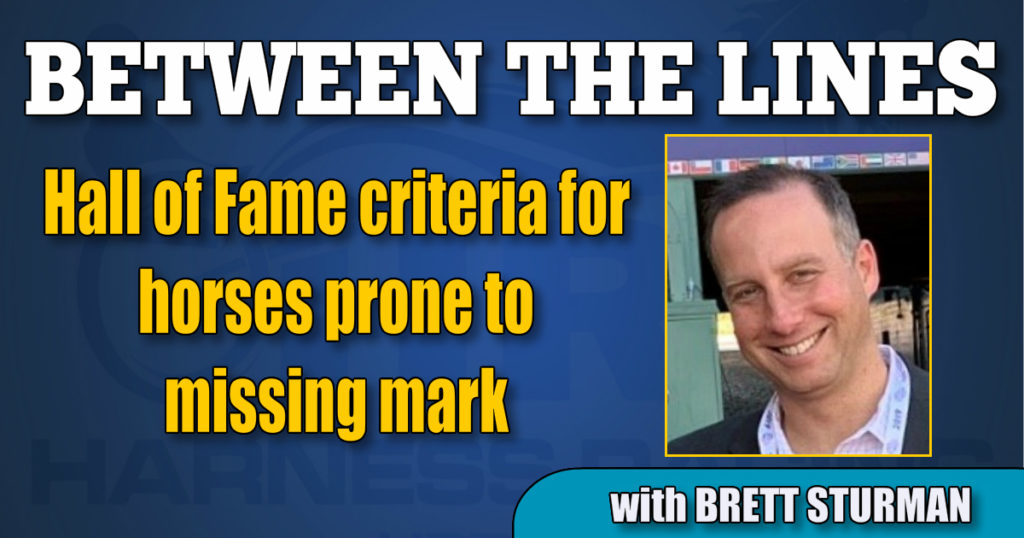 Hall of Fame criteria for horses prone to missing mark

In 2021, Always B Miki, Bee A Magician and Sweet Lou will be the newest racehorses inducted into the U.S. Hall of Fame. As with all other top vote getters from their nominating class both past and present, their nominations were only first allowed due to each of them meeting sets of criteria set forth by the Living Horse Hall of Fame Committee.

In order to be under consideration for the Hall of Fame, racehorses must either have won $2.5 million in career earnings along with two Dan Patch (U.S.) awards. Or, absent of two Dan Patch awards, horses must have won $3 million lifetime. Horses who have been named Dan Patch Harness Horse of the Year can be eligible, too.

The specific sets of nominating prerequisites present a conundrum where horses that would otherwise qualify for consideration based on their merits, cannot even have their credentials debated.

Take for example, the case of Mach Three. The son of Matt’s Scooter raced in 2001 and 2002 and retired with career earnings of $2,376,700. Though inducted into the Canadian Horse Racing Hall of Fame following his untimely death in 2017, in part because he had deep Canadian connections, Mach Three will never enter the U.S. Hall of Fame. It’ll never even up for debate, as current conditions do not allow for it.

Mach Three doesn’t meet the Dan Patch or earnings requirements, but if not for a nose defeat to second-over Western Shooter who rode his first-over cover in the 2001 Breeders Crown, he would have gone from zero to being two-thirds of the way there. If that narrowest of finish went the other way, Mach Three would have ran away with 2-year-old divisional honors and would have also finished over $2.5 million in career earnings.

That Mach Three never won a Dan Patch award or the comparable O’Brien award in Canada is more of a reflection of the quality of those loaded 2- and 3-year-old crops more so than on Mach Three himself. After just losing out to Western Shooter as a 2-year-old, he was bested for the honor by future Hall of Famer Art Major as a 3-year-old. In addition to Art Major whom Mach Three beat while racing, that crop also included the likes of McArdle, Red River Hanover and a host of other millionaires.

With a career record of 18 wins in 27 starts against one of the best racing crops in history – if not the very best – Mach Three’s career highlights were winning the Metro Pace at 2 (over Red River Hanover) and winning the Meadowlands Pace at 3 (over McArdle), the latter of which in 1:49 established a Meadowlands Pace record at that time. Are those two wins plus 16 others and a lasting overall body of work Hall of Fame worthy in the U.S.? I honestly don’t know. It seems like it might be, though. What would be lost by being able to bring it forward for discussion?

It should also be noted that Mach Three sired the winners of more than $150 million, including one of the greatest racehorses and stallions of all time, Somebeachsomewhere. Mach Three may, in fact, qualify as a stallion. The criteria for stallions is as follows: must rank among the 10 all-time leading money-winning sires at their gait, OR have sired at least 100 $200,000 winners, OR been a leading money-winning sire at his gait in three or more seasons. He is hovering around the top 10 all-time and has produced 445 $100,000 winners, so, presumably, he has more than 100 offspring over $200,000, though the exact count was not available at press time.

For race mares, the Living Hall of Fame nominating requirements are similar, though the earning thresholds have been lowered. Though, that won’t aid the cause of one of the great race mares of all-time in Darlin’s Delight.

The third-highest earning pacing mare ever at over $2.9 million, she only won a single Dan Patch award during her 3-year-old season in 2006. The reason she didn’t win another Dan Patch either as a 2-year-old or in her final two seasons had a great deal to do with her chief rival, My Little Dragon. Darlin’s Delight and My Little Dragon represented one of the best pacing mare rivalries this century, and neither have yet been nominated to the Hall of Fame for their accomplishments. For her part, My Little Dragon does have the two Dan Patch requirements (winning as a 2-year-old and again as a 4-year-old) as well as the required career earnings for a race mare.

In looking at these two race mares, couldn’t it be debated where they relate to fellow Hall of Fame pacing mares from around that same time period, Rainbow Blue and Bunny Lake? Both of those fillies were named Horse of Year for their 3-year-old seasons, but I don’t recall either of those having to deal with the depth of a crop such as Mach Three or an equally talented rival such as Darlin’s Delight and My Little Dragon. Don’t misunderstand – this isn’t meant to retract from Rainbow Blue nor Bunny Lake whom are both more than Hall of Fame worthy – but they didn’t race against barriers others did that precluded them from higher earnings or additional accolades.

From an even more recent instance, Tall Dark Stranger would seem be on track for eventual U.S. Hall of Fame induction. His two-year career mirrors that of Captaintreacherous who was a first-ballot Hall of Famer, but Tall Dark Stranger would get in only on the condition that he wins the 2020 Dan Patch award for Horse of the Year since his $2.3 million in career earnings is less than the required $2.5 million (even with multiple divisional Dan Patch awards, unless one of them is Horse of Year). It’ll work out this time but had 3-year-old filly Party Girl Hill not been upset in her Breeders Crown this year, then Tall Dark Stranger would likely not be Horse of Year and would not be up for Hall of Fame consideration. And it seems like exclusion would then be due to appearance of a technicality between earnings and awards, which doesn’t do justice to anyone in the process, including the Hall itself.

I’m not calling for the eligibility into the Hall of Fame to be less stringent; just perhaps less rigid. Set out to provide objective measures, the underlying Dan Patch award process can be subjective to start with. And earnings can vary based on the fluctuations of race purses, something that is increasingly prevalent today in current economic uncertainty.

At the end of the day the Hall of Fame should be reserved for the very best horses, as it always has been. Changing or removing the limits for horses to first be considered won’t suddenly allow an undeserving horse to be inducted. But it might allow for an induction of a deserving horse that wouldn’t be considered otherwise.