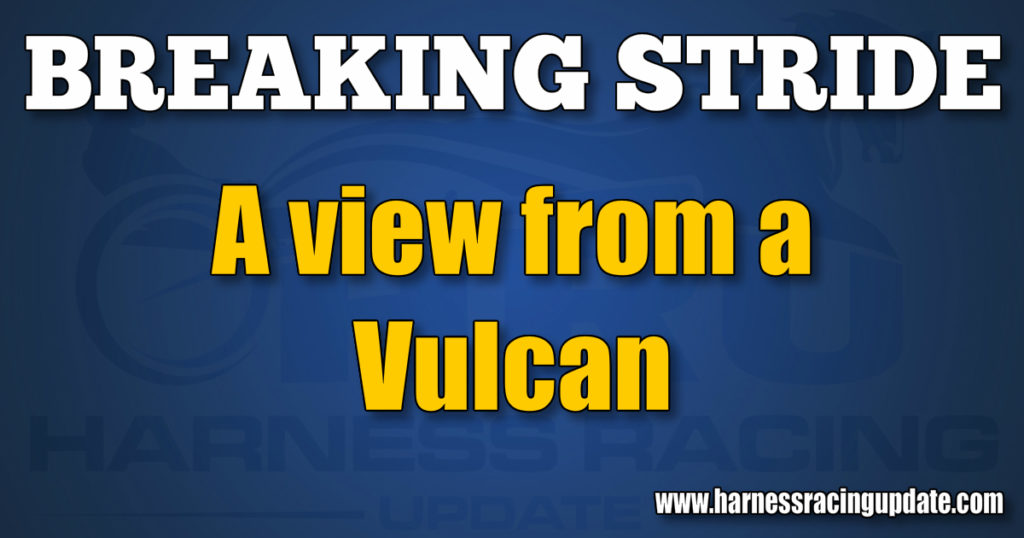 A view from a Vulcan

“Are you for or against HISA?” I asked David as I flicked on the turn signal.

“Since I don’t know what it is, it would be foolish to take a stance.”

“What are you, a Vulcan? Real humans make snap judgments on jazz music, politics, civil wars, laws, the opera, or tofu. Humans defend our position to the death. We listen passionately to voices from our side and brand the other side idiots.”

“And never change your mind?”

Softly he said, “Or maybe heroes.” He paused for a moment, then asked, “So, what is this HISA legislation of which you speak? The title sounds benign. Who can be against integrity and safety?”

“The harness racing national organization doesn’t seem to be a big fan of HISA.”

He said, “I’m going to need a little more information. Without data, I would be a person spouting off an unfounded opinion.”

“Data? Where do I get data? I’m a nobody with no inside track. All I have are opinions and op-eds marinated in the traditional treadmill of rumors, shooting from the hip, and gossip.”

“Well, give me your impression. Since when is Trey timid about offering an opinion?”

I sighed. “To me, HISA looks like a power thing. The side that supports the legislation says that the federal government would do a better job for horse racing’s integrity and safety. The folks against the bill prefer individual states and individual breeds of racing tend to their barns. For example, if the feds rule, using the medication, Lasix, could be out. Otherwise, the states or types of racing can keep using it.”

“What do you think about Lasix?” he asked.

“I’m on the fence. My long-time trainer rarely used it, but it was annoying when we were the only horse in a race without it.”

“YOU, on the fence? Maybe you have some Vulcan blood.” He flashed me the split-finger Vulcan sign with his right hand and said, “Back to the pending legislation, besides the medication issue, what are other objections?”

“Not sure. The anti-legislation folks say racing under the Feds could cost more money to race a horse because of additional testing. We would get lumped in with other types of horse racing. Deep down, plenty of folks in harness racing are old school and don’t like change or to be mandated.”

He finally offered a hint of an opinion, “I’m guessing existing state agencies currently in place don’t want to get squeezed out.”

He scratched his greying buzzcut and asked, “How is the current system working out for harness racing?”

“Not great. The most recent example was just before COVID. Several arrests went down for cheating in horse racing. Some of the indicted were harness trainers and vets. These alleged cheats did their drugging year after year, took purse money, and not much of significance happened. They were some of the highest-earning trainers in the sport. Only when the Feds stepped in with wiretaps and unlimited resources did the hammer fall. It still may be falling.”

“What do you mean, hmmm? I’m looking for wise counsel, not a harmonica solo.”

He smiled and asked, “Do you know any crooks?”

“Not so much in racing.”

He thought for a moment, then asked, “Do you think a crook in horse racing is more afraid of the racetrack and the racing commission or the FBI and the IRS?”

Then he asked, “What enforcement tools would help in harness racing on the integrity and cheating fronts?”

“Enough. Now tell me, who has the power, the money, the time, the motivation, the backing, and the mandate to enforce these tools?”

He continued, “Imagine you are a local regulator with a tip or a statistical anomaly on a horse’s performance. You show up unannounced at a local training center for out of racing testing. You know the owner or trainer, and they will know you. The test comes back dirty. Your next step is to go to your bosses and throw this expensive pile of manure and fury on their desk. They may talk the talk, and they might try to enforce, but deep down, especially against big dogs, all along the line, everyone sees expense and trouble to possibly no satisfactory end. The local regulator is between two parties that are irritated. Litigation can go on forever. The task is endless. Do you want that job?”

He said, “My first thought is the federal route would be the most promising. Different breeds of horse racing probably do not care about each other, but they increase their clout if they unite. My impression from my working in technology was that national legislation would eventually reach gambling and funnel through big tech. If your sport is an isolated outlier, any effect is limited. How will an entity like the state of Michigan harness horseman’s commission combat something along the lines of offshore gambling?”

“So, the Vulcan from Silicon Valley thinks we should get under the umbrella.”

He shrugged. “I don’t know all the details and ramifications for harness horse racing, but most of the time, an umbrella is better than running alone in a storm.”