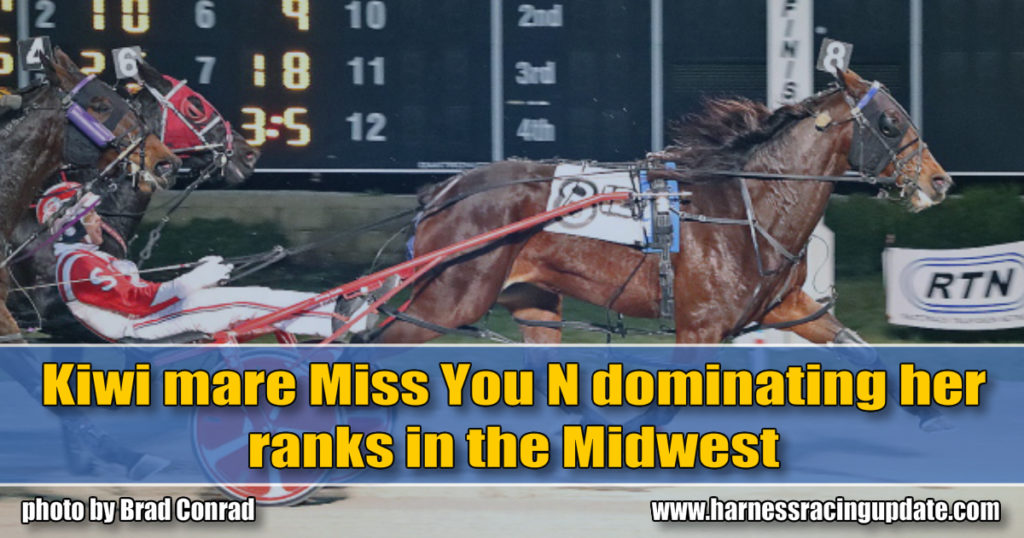 Kiwi mare Miss You N dominating her ranks in the Midwest

Southern Hemisphere invader Shartin N has taken the mare pacing world by storm with her consistent efforts and speed, but it is another New Zealand transplant that is starting to turn heads in the Midwest — Miss You N.

Miss You N is the 6-year-old daughter by Betterthancheddar and has won eight of her last nine starts – all in opens or invitationals at Hollywood Dayton Raceway and Harrah’s Hoosier Park.

Foaled in 2014, she is the product of the mating between the shuttle stallion and Woman In Black, who was lightly raced, but recorded four wins, a pair of seconds and three thirds in just 11 career starts.

She was exported in October, 2018 and ended up in the Ross Croghan barn for the Let It Ride Stable and Dana Parham. Miss You N quickly adapted to the U.S., winning eight of her first nine starts – all in conditioned events and all on the half-mile oval at Yonkers Raceway.

In her 13 starts for her new connections, she has not missed the board with a 9-2-2 record and has earned $124,550. Miss You N was a scant nose away from having an active nine-race win streak. Her impressive run started with a gate-to-wire win on Sept. 25 at Dayton Raceway. The following weekend she once again was the pacesetter and recorded her career best 1:49 in the $25,000 open over the Dayton five-eighths mile oval. Her 1:49 mile makes her the fastest offspring of Betterthancheddar.

The biggest victory this season was a 1:50.2 win in the $67,500 filly mare invitational at Hoosier Park on Breeders Crown night. Dexter Dunn picked up the drive that night and thanks to an outside post position was forced to race off-the-pace. Miss You N was up to the task and scored a 1 ¾ length win.

“I think she’s just as good, if not better, passing horses,” said Morgan. “She loves to pass horses. You just have to look at that Hoosier Park win.”

On Dec. 4, from the outside post #7, driver Jeremy Smith hustled Miss You N off the starting gate wings and led until the final stride, edged by pocket-sitting The Bethinator. The mare’s seven race win streak was over.

In her latest start, the filly mare open on Dec. 11 at Dayton Raceway, Smith reverted back to their usual front-end style to score in 1:52.1.

“Lately, she’s been so much the best that it forces you to go forward with her off the gate,” said Smith. “A lot of the guys respect her, so I get to kind of control the tempo and then we drag race home.”

“She is the nicest mare I have ever had the privileged to drive,” said Smith. “I refer to her as one of the ‘extra ten percenters.’ She’s got that extra will to win.”

Training Southern Hemisphere horses is nothing new to Morgan. He has been training Aussies and Kiwis for nearly 20 years, when the newly named Ohio “Hall of Fame” conditioner was training for Joe Muscara.

“We would get between five and 10 horses a month shipped up,” said Morgan. “But that was 15 years ago. The pedigrees are so much better now. Back then, you would have some unknown sires and mares you have never heard of. That is not the case now.”

Miss You N currently sits with more than $300,000 in career earnings and Morgan and Smith are looking for more good things from Miss You N.

“She’s a joy to be around,” said Morgan. “She’s got a great attitude and really loves to race.”