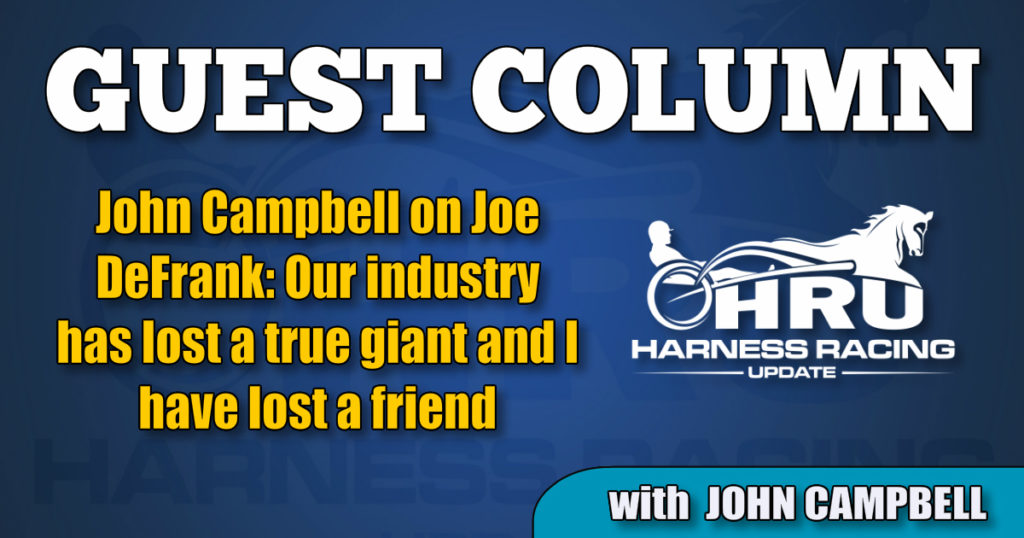 John Campbell on Joe DeFrank: Our industry has lost a true giant and I have lost a friend

With the passing of Joe DeFrank this past week our industry has lost a true giant and I have lost a friend that I had the utmost respect for.

My first recollections of Joe go back to the late ‘60s when I was 13 or 14 years old. I would go to Windsor Raceway to help my dad every time I got the chance and on occasion dad would go back to the farm and I would be in charge. On these occasions when I heard “Jack Campbell come to the racing office “I would have to make that trek and head into that office on somewhat shaky knees.

You talk about an intimidating presence. The conversation would go something like this:

“I need Oro Duke for a race on Friday night “

I would meekly reply, “I’m sure it’s okay, but I have to check with my dad.”

“You do that and get right back to me.”

My dad was part of a long list of trainers at Windsor who would be considered Joe’s people. It was an easy list to get on, as all you had to do was show up with your horses ready to race, conduct yourself in the proper manner and help Joe with entries when requested. There was a short list for folks who didn’t fit this criteria and from Joe’s standpoint you were either in or out. Joe did not do grey area.

In the fall of 1977, I had a conversation with Joe about me giving The Meadowlands a try when they reopened in January of 1978. He encouraged me to do so and assured me he would allot me stalls if I applied. He was very generous in his allotment and I’m still in Jersey 42 years later.

Our friendship and respect for each other grew over the years and although we did have occasional disagreements I do not ever recall an angry word between us.

Those years at the Meadowlands were incredible and certainly a golden age for harness racing. I was just a bit player along for the ride, but Joe started the ride and was the major player in making that time period the unparalleled success that it was.

Every driver, trainer, owner, stallion owner and breeder in our industry today is deriving benefits as a result of Joe DeFrank`s vision, innovation and presentation of major stake races. Harness racing had never imagined purses that the Meadowlands Pace and Woodrow Wilson were going for and, imitation being the best form of flattery, other tracks soon changed their outlook and approach to their stake programs. The Metro, North America Cup, Breeders Crown and many others all evolved after the success of Joe’s vision at The Meadowlands and he started the Final Four races at Garden State Park, as well.

I urge everyone to read the words of Stan Bergstein when introducing Joe at his Hall of Fame induction that appear in Joe’s obituary (full story here).

Stan sums up the man, his impact and accomplishments far better than I can. I can honestly say I saw a one-of-a-kind man leave his impact on our sport that will continue for years to come.

He was an icon.