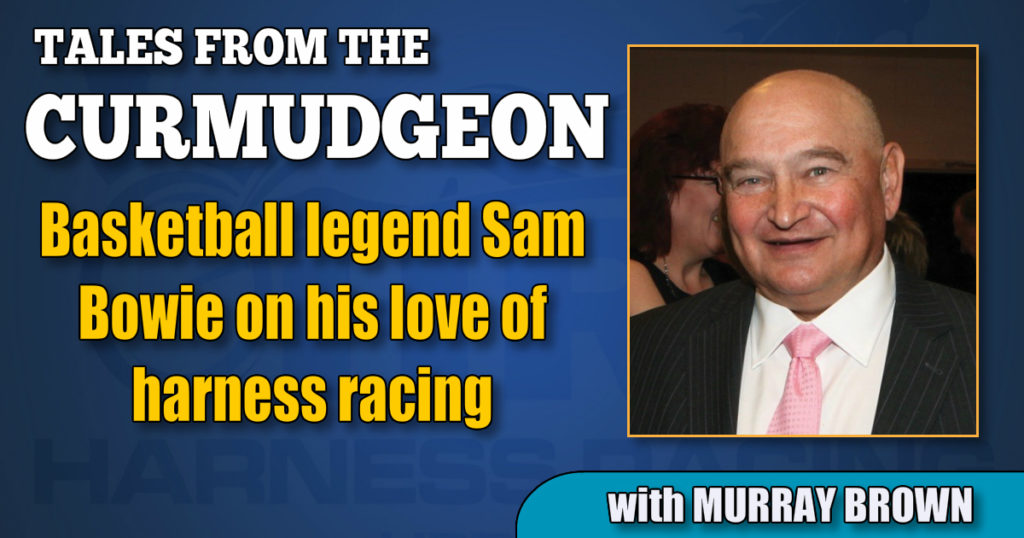 Basketball legend Sam Bowie on his love of harness racing

How his time at the University of Kentucky led to his continued involvement with standardbreds.

It seems that I often think or start my columns with, “If there is a nicer person than ‘whomever’, then I haven’t met him or her.” It could be because I have been lucky enough to have met so many exceptional people in our great sport, or that I could be slightly exaggerating.

In the case of Sam Bowie it’s definitely the former.

Bowie is best known as having been a great basketball player both in college at the University of Kentucky and for several NBA teams.

To the many people who know and have met him, he is simply a wonderful person.

At the age of 18 in 1979, while a student and player at the University of Kentucky, Sam came upon a place called The Red Mile. He stopped and watched, with some interest, a bunch of horses pulling buggies around the racetrack. Soon he was approached by a horseman who recognized him.

“Would you like to take a ride behind one of those horses?” he was asked.

“I’ve never been behind or near a horse,” he responded.

Despite his total lack of experience, he was persuaded to jog a 12-year-old Meadow Chuck gelding around Lexington’s famed Red Mile. It was love at first sight. He was hooked.

He made a promise to himself that once he turned pro and had the money, owning harness horses would be a definite in his future.

He became an avid fan of harness racing and was often to be found at Red Mile watching the races and wagering on them.

His first experience as an owner took place five years later when together with David Caldwell, the father of Elizabeth Caldwell of Cane Run Farms, he purchased three yearling pacing fillies from Castleton Farms. One of them happened to be the stakes winning Abercrombie filly Legacy Of Love who ended up winning $206,384 for the partnership.

Since then, rare has been the year when he has not owned one or more racehorses.

Bowie ended up buying out the interest of Caldwell in Legacy Of Love and kept her and raised a few foals out of her.

He soon decided that the breeding and yearling games were not for him. He wanted instant action and decided that he would invest his money in racehorses.

Generally speaking, he has been quite successful. His horses have raced well and he has enjoyed the thrill of ownership.

There is an old saying that I first heard in French, “Plus les chose changent, plus elles resent les memes,” which translates to “the more things change the more they remain the same.” Sam Bowie is now back in the yearling game.

He now owns two horses. The best one is a 2-year-old filly named Hot Mess Express. She is by Panther Hanover and is eligible to the Indiana Sires Stakes. Sam had seen her win in 1.54 at Hawthorne Park and was impressed by her. He called the owner and asked if she was for sale. He was told yes and the price was $150,000. Sam responded, “I’ll tell you what. I’ll wire you $125,000 and I’ll buy her without any further dickering or veterinarian examination.” His offer was accepted. She was one of the leading pacing fillies in Indiana and ended up taking a record of 1.52 and earning $135,065 this year.

The partners can be found just about every morning beginning at 6.30 a.m. at the Tony Alagna Stable at Sunshine Meadows. About an hour later, they are joined by Mr. Harness Racing, Myron Bell, where they spend the entire morning critiquing the horses on the racetrack and bantering about harness racing and often straying into basketball. If this author was back in Florida, the group would be a foursome.

Both Bowie and this author share a great love for harness racing and basketball — make that an obsession.

Sam, Let’s talk a little hoops. How do today’s players compare to those of your generation?

It looks like both our loves, the University of Kentucky and Duke basketball teams, are in a similar situation. They both are off to disappointing starts.

“I would put the blame mostly on youth. In recent years, both teams have relied heavily on freshmen. The same is the case now. However, in this year of COVID-19, their respective preparation time has been negatively affected. These kids are teenagers playing against teams that are loaded with upper classmen. They are physically, perhaps emotionally, and certainly in terms of experience, compromised. In previous years, before facing the kind of competition they have already met, they would have had a few games against teams that were a grade or two below those that they are facing now. This would have not only given them the experience that they so greatly lack, but would have also boosted their confidence. I have no doubt that by the time the season is over, if there is a full season, that both teams will evolve into a force with which to be reckoned.”

Which brings us to a subject raised by Coach Mike Krzyzewski last week. In the midst of this raging pandemic, do you think that in these times college basketball, in particular, and sports and general, should take a back seat and reassess until things quiet down?

I would agree with Coach K. The primary responsibility of those running collegiate sports is the health and well-being of the kids participating in them and everyone associated with the programs. Pro sports might be another subject. They are dealing with grown men, many of whom have financial security and all who have the choice of whether to participate or not.

“I really like Rick Pitino’s suggestion that perhaps we suspend the basketball season until March, when presumably things will have cooled down and continue it until May when “March Madness could become May Madness.”

Do you miss basketball?

“I certainly miss the competitiveness, the sense of fraternity, not to mention the financial security that the game gave me. But these old legs of mine have never been perfectly right, even going back to my freshman year at UK. With each year they got worse. To be truthful with you, even when I was drafted I made myself out to be a lot sounder than I actually was in order to secure a high spot in the draft. Nevertheless, I persevered through 10 grueling seasons in the NBA. Actually it could have been 12, because I was offered a lucrative two-year contract by the Los Angeles Lakers to be the back-up center to Shaquillle O’Neal. But I couldn’t do it. My legs were just too bad, and I hurt too much to endure an NBA season, even one where my playing time would be limited.”

While you were in the NBA did you maintain your interest in harness racing?

“For sure. Especially when I was playing for the New Jersey Nets. We were right next door to The Meadowlands. Often, when we were home and weren’t playing that’s where you would find me. I’m a great fan of the sport and its history. I love being around people like Myron, Jerry, Carter Duer, Terry Miller and yourself who speak of the great horses and people of the past. I love hearing those stories and absorb most of it like a sponge. I would spend most of the off season in Lexington and time would often find me watching the horses in the morning and in the evening betting on them through simulcasting.”

How is life for Sam Bowie these days?

“If I had to use one word to describe it, I would say wonderful. This was the first time we spent the entire year in Florida. Despite the terrible consequences of COVID-19, we have learned to live with the restricted lifestyle. I’d have breakfast every Tuesday morning at the Flakowitz Deli and bakery with Jerry Glantz and Myron and speak of the previous and upcoming races. On most big race days, we’d gather at Myron’s place and watch the races on his large screen TV setup. Now that many of the stables have shipped down here with their babies, it becomes more exciting — we get a chance to dream for several months and enjoy watching them develop.

“One thing I’ve found is that it is far from being an accident that Tony Alagna has achieved such remarkable success. As large as it is, his stable runs like the proverbial well-oiled machine. Everything is first rate — the feed, the equipment, the organization and especially the people. In addition to being an incredible horseman and the hardest of workers, Tony is an excellent communicator who keeps his owners well informed on the progress of their horses. I don’t know how he finds enough hours in the day to do all that he does. But he manages to do it all in a first-class manner.

“I was never around Billy Haughton much, but everything I’ve heard about Mr. Haughton in terms of hard work and running a huge hands-on operation, Tony comes close.

“My wife and I have a standing dinner date for two couples at Palm Beach Grill at 6.30 every Friday evening. I get on the golf course occasionally. I have a regular breakfast group of about 12 men who get together every Sunday morning to schmooze and break bread together. I would say that life is good.”

Author’s Note: I write this part without Bowie’s knowledge. I’ve known many famous athletes in several sports. Most of them were good guys who were receptive to the public. I’ve never known one who had quite the patience and good will toward fans as Sam Bowie. I’ve seen him sign autographs by the hundreds, always with a smile on his face and a thank you to the person asking for it. I’ve seen him pose for pictures with numerous folks — always willing and receptive. At a basketball luncheon last year in Florida, in addition to the regulars asking for his autograph and pictures, there was one guy who I assumed was probably a card dealer of some sort who came to him with a stack of his cards. There had to be at least 50 of them, maybe even more. Sam patiently signed each one. I’ll end this as I started it, if there are nicer people in or out of harness racing than Sam Bowie, I have yet to meet them.