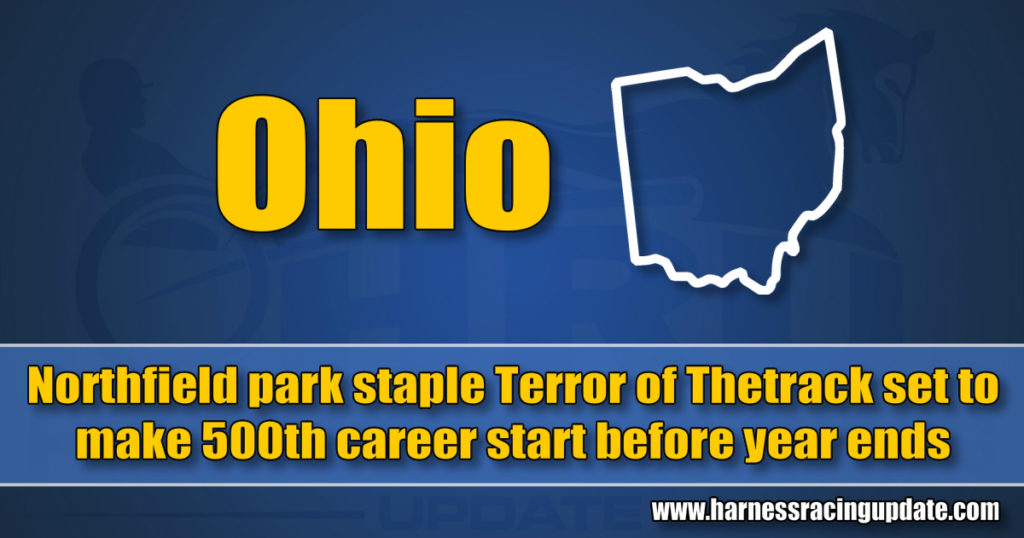 In pari-mutuel racing, there are no dollars awarded for longevity. Bettors and the horseman’s bookkeeper don’t care if you show up each week and finish off the board.

Perhaps they should. No one is looking for a gold watch and a pension, but a little love wouldn’t hurt.

Some of it could be directed towards Barn D on the Northfield Park backstretch where Terror of Thetrack lives. If there was ever a racetrack survivor — and a squatter to boot — it’s this 14-year-old moderate brown pacing gelding.

Before 2020 ends in a few weeks, and his racing days are is over, and unless he stubs a toe, Terror Of Thetrack will become only the 17th horse in the history of North American harness racing to have made 500 career starts. There is no active trotter or pacer that has started more times than him.

Trained and driven by veteran Keith Kash, Terror Of Thetrack is in the sixth race Wednesday (Dec. 16) at Northfield to make his 499th lifetime start.

There is no catching the all-time start leader, Jersey Buddy. He went to the post 621 times.

Kash claimed the Ontario-bred son of Breeders Crown champion Western Terror out of the unraced Coal Mountain mare, Over the Coals, for $7,000 in 2012 when he was a 6-year-old. He has raced for Melinda Kash, Keith’s wife, ever since.

“He was clean-legged and he traveled really nice,” said Kash. “He was just put together decently and is always knocking on the door.”

Especially if that door is attached to a barn at Northfield Park. Terror Of Thetrack never strays very far from home. He has made 369 consecutive raceway starts at Northfield Park. The streak started in the fall of 2012. The only time he’s vanned in and out of the stable gate at the northern Ohio oval was in August of 2018 for a fair start in nearby Canfield (Mahoning County) a race that he won.

Kash admits that Terror Of Thetrack has become somewhat of the stable pet.

He’s as big as a house. Maybe, too fat,” Kash said. “I tell my wife all the time you need to cut his grain back.”

Only twice in his racetrack career has Terror Of Thetrack earned more than $25,000, but Kash says he’s paid his way.

“If he would have had owners paying a training bill, they would have lost money,” said Kash. “But my wife and I do most of the work. Melinda is the backbone of the operation. She’s the equipment manager and handles just about everything else. The only real expense we have with him is shoeing. He’s a once-a-month horse at about $120.”

Also keeping down Terror Of Thetrack’s room and board is his genetic make-up.

“He is unbelievably sound,” said Kash. “I’ve never had to have his joints injected. He’s never been on Lasix. At $20 a shot, that’s a heck of a savings. He’s just a low maintenance horse.”

Terror Of Thetrack has averaged 41.6 starts a season for 12 years. He didn’t race as a 2-year-old and lost three months of action earlier this year when Northfield Park shut down because of the coronavirus pandemic.

Kash knows they’ll be a hole in the racing operation when Terror Of Thetrack exits at the end of the year.

“We’ve got a good home for him on a farm when he’s done racing, but my daughter Kylee has a pony that is in the stall next to Terror Of Thetrack. There is only a half wall between the two of them. When one of them leaves, the other one hollers his head off. Yes, we’re going to miss this guy. He’s become family.”