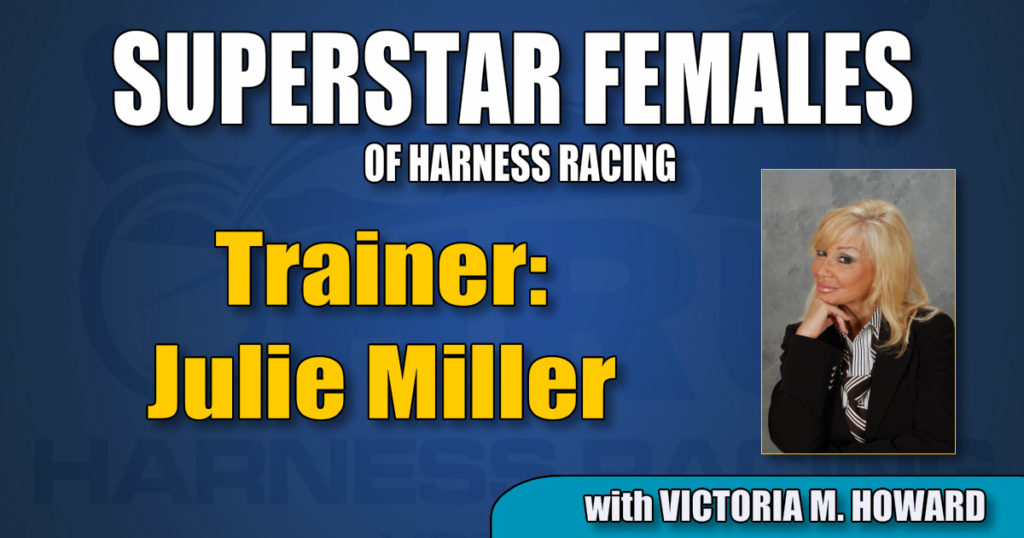 Working alongside her husband, Andy, day in and day out is not a problem for trainer Julie Miller. In fact, she considers herself lucky and blessed to be doing what she loves — and get paid for it — with Andy who is not only her husband, but her best friend.

“I am very lucky to work alongside my husband. It all comes down to trust and respect and we have confidence in each other,” said Julie.

Born in 1972 in Marion, IA, Miller grew up on the family farm and began training, grooming, taking care of the track and managing the farm at an early age. She worked for her parents, Owen and Ellen Julius, before getting a job at Fairmont Park under trainer Ron Liles.

Julie got a bachelor’s degree in science from Southern Illinois University, but her first love was and always will be harness racing.

“My family raced mostly in Iowa and Illinois. It was in the early ‘90s while racing horses in Springfield, IL that I met my future husband, Andy Miller.”

Andy is known as “The Orange Crush” due to his orange racing colors and successful career in the sulky. Together, they are called “Team Orange Crush.”

Andy was the top driver on the Chicago circuit before coming east and finding even more success. He became the 22nd driver in North American history to get 9,000 sulky wins.

Although Andy does most of the driving, occasionally Julie gets her turn in the sulky.

“I love to drive,” she said. “Any opportunity to qualify or drive a horse I jump at. When I was 19 years old I won my first pari-mutuel race.

“Although I would love to drive more, when you’re married to one of the best drivers in the country — and our son is following in his dad’s footsteps — my chances are limited.”

Julie won her first race as a trainer in 1993 at Quad City Downs. Her career as a trainer took off in the late 2000s when she and Andy relocated to the east coast. In 2007, her stable cracked the $1 million mark in earnings and was victorious in more than 100 races for the first time in 2009.

Today, the Millers race mostly on the east coast following the Grand Circuit to Indiana, Kentucky, Canada and Ohio.

“My favorite tracks to race at are the Red Mile and the Meadowlands for the best Grand Circuit races take place there.

“We currently have a 30-horse stable at Gaitway Farms in New Jersey. We own 3 broodmares and for us that’s enough for I am foremost a trainer and not a breeder.

“But it is a thrill when you breed one and he goes on to be a good one. As far as my best horse – there have been so many who have touched my heart, but I would have to say VENERATE was the best horse I raised. He was the smartest and fastest horse I have ever been involved in developing and gave me my biggest thrill by winning the inaugural Mohawk Million.

“But any horse that overcomes any obstacles to be the best they can be and race to the best of their ability holds a place in my heart. Besides VENERATE, MET’S HALL and DESIGNED TO BE are at the top of the list, too.”

What does Julie look for when purchasing a yearling?

“When I buy a horse, of course conformation and proportion are very important, but most of all, they need that ‘wow’ factor. Athleticism and charisma is a must, but ‘a good feeler’ and how they move in the field are all signs of a leader.”

Julie said here favorite horse is the one that give the best effort. She doesn’t have a preference for trotters or pacers.

“They just have to have the will to win.”

Undoubtedly, a horse named LUCKY JIM would definitely fit the bill for he was Millers’ top trainee, winning 17 of 18 races, earning $1 million and being named 2009 Older Trotting Horse of the Year. LUCKY JIM trotted a world record of 1:50.1 in the Nat Ray at the Meadowlands and went on to win the Breeders Crown.

The Millers have had remarkable and successful careers, and it’s just beginning. This year on Nov. 20 Julie received one of the best gifts for her 48th birthday when she was at Freehold Raceway and her horse won her 2,000th race as a trainer.

The icing on the cake was that her son Tyler drove their horse KEYSTONE ORION as he crossed the finish line first.

Does having her son in the sulky worry her — especially after Andy was involved in a serious racing accident in 2014 that required eight hours of surgery and months of recovery time?

“Any sporting event has risks, but I try to focus on the horse in the race and have him prepared for the best performance at the event,” Julie said. “As far as our son, Tyler, I asked him to graduate from college and then we would support him in his goals. He has chosen to follow our footsteps and make a career in racing horses, so we are behind him 1000 per cent.”