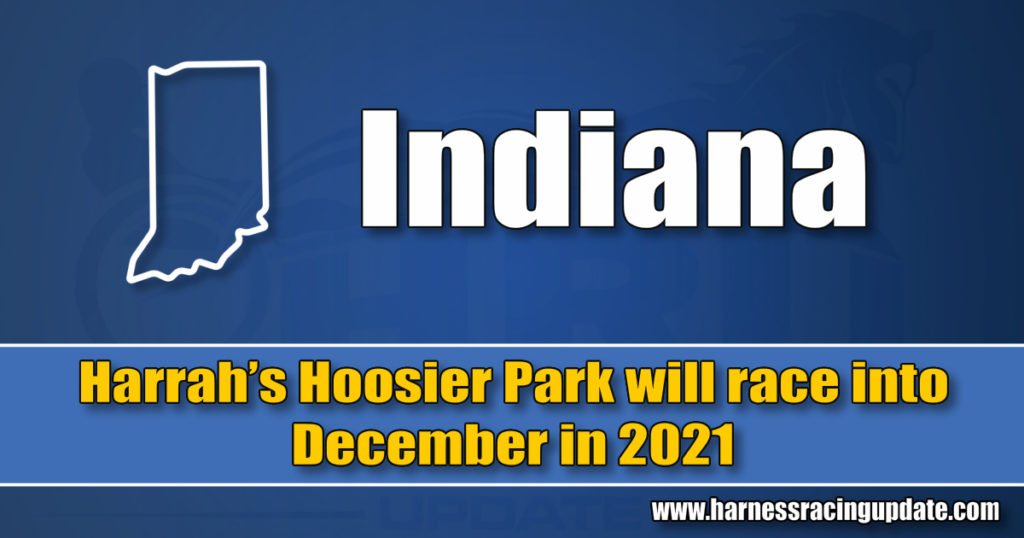 Harrah’s Hoosier Park will race into December in 2021

The Indiana track will also spend more than $2 million on capital improvements with most of that on a surveillance system for the barn area. “I think it just goes along with our commitment to integrity,” said vice president and general manager Rick Moore.

Harrah’s Hoosier Park will conduct a 2021 harness meet that will extend into the month of December, marking a first for the Indiana oval. The Indiana Horse Racing Commission (IHRC) approved a plan Thursday, (Dec. 10) where the Anderson track will conduct 160 days of racing over 37 weeks. The idea behind the plan, negotiated between the track and the Indiana Standardbred Association (ISA), is to offer more racing opportunities late in the year.

“The way our business model is, most horses race weekly. We haven’t changed the number of race days, but it’s going to be slightly different,” said ISA president Joe Putnam. “We added a couple more weeks on the very end of the meet; they will be three-day weeks. By adding a handful of weeks, that’s just more opportunity for everybody to stay home and continue to race.”

The 2021 campaign will kick off with opening weekend cards on Friday, March 26 and Saturday, March 27. Hoosier is slated to move to a three-day second week to open the month of April before expanding to four days a week the remainder of the month on a Wednesday through Saturday plan. In mid-May, the track will offer five days of racing, with a schedule that is a departure from the past. Hoosier has dropped Tuesday racing in favor of Sunday cards for 2021.

“I like the fact that we have four days for the first month and a half when you don’t know what the winter will be and you don’t know how many horses are going to be ready. I think it’s going to help us keep full fields and 13 or 14 races,” said Rick Moore, vice president and general manager of racing at Harrah’s Hoosier Park. “We’re trading Tuesdays for Sundays. We’re going to try it. We’re not going to stick with the status quo; we’re going to try some things. If it doesn’t work and we don’t see the handle we think we’re going to see, we’ll move back to Tuesdays. We’re at least going to give it a good, honest effort, and see what it does for us.”

The schedule will contract to four days each week beginning in October, and to three in November, with the meet closing in the first week of December. Pari-mutuel racing has not been held in the month of December in the Hoosier State since Indiana Downs’ (now the thoroughbred-only Indiana Grand) inaugural 19-day meet in 2002. This season, the racing calendar was extended at Hoosier when compared to past meetings, with good results.

“This year we raced to the 21st of November, so it was a couple weeks longer than previous seasons. It seemed like there were plenty of horses available, plenty of opportunity,” said Putnam. “I think it worked out pretty well, so we’re just expanding upon that.”

When the transfer of horse racing licenses to Eldorado Resorts Inc. was approved by the IHRC in July, one of the stipulations included the establishment of a Racing Capital Escrow Fund with $25 million earmarked to spend over a 10-year period. As part of that commitment, projects with an estimated price tag of $2.15 million are underway at Hoosier Park. The most significant of the investments is a barn area surveillance system which will cost $1.5 million.

“I think it just goes along with our commitment to integrity. Not saying anyone is not doing the right thing, but let’s ensure that everyone is doing the right thing here on track,” Moore said. “We want Hoosier Park to be known as having the fairest playing field of any track in the country. When you do that, I think you’ll see new barns coming here. I think that will attract folks.”

Other items include rebuilding Barn 4 on the backside, purchase of a garbage truck and spreader, and replacement of dorm floors. Moore said the barn had served as a catch all, and is currently being prepared for the installation of 60 stalls, which are on order. All of the work will be complete before Hoosier Park opens for live racing in 2021.

“They are sticking to their commitment. There are several different projects and new equipment. Stalls back in Barn 4. Security cameras in the barns. Just committing to keeping a first-class facility and also taking the integrity part of the business serious,” Putnam said. “This just further commits to that, and their standards also. Joe Morris alluded to it, setting the gold standard. It is kind of setting the bar high. I feel like our bar has always been higher than some. It’s sort of setting the standard for the whole country.”