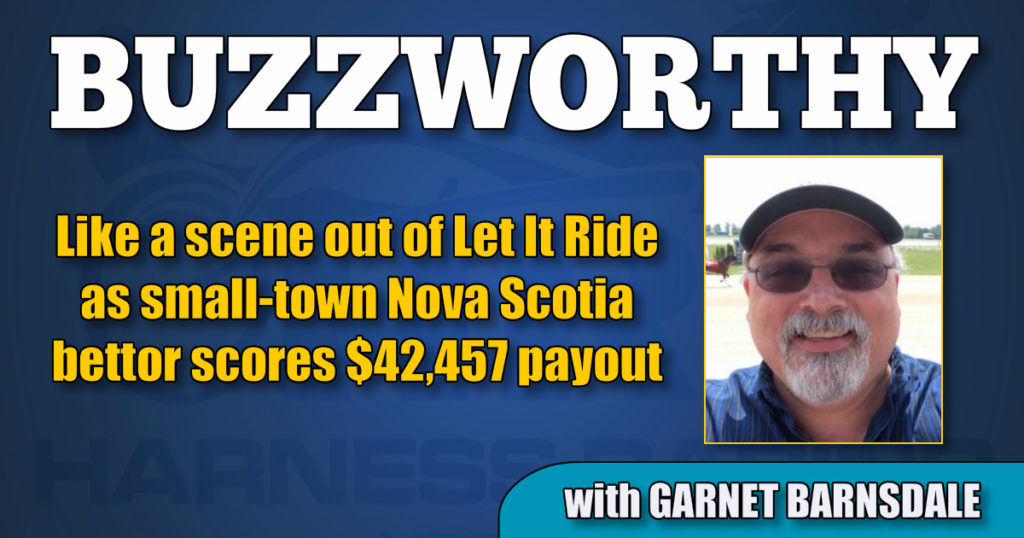 Like a scene out of Let It Ride as small-town Nova Scotia bettor scores $42,457 payout

It’s not uncommon for bettors to wonder openly who might have made the score when a pool gets scooped by a lone ticket holder. More often than not, these big scores go to computer bettors or “whales”. They didn’t have to wait long to find out Friday night after Sylph Hanover’s win in race 10 at Mohawk Park produced a $42,457 payout in the late Pick 5 to a bettor holding the lone 20-cent winning ticket.

Peter McGuigan tweeted out a video from a small simulcast room in Sydney, NS that showed the in-race exhortations of the man (identified only as Mark) holding the live ticket to Sylph Hanover, accompanied by his friends. The video — which has since been deleted – was like a scene out of the movie Let It Ride.

The mayhem was best described by Jerry Hennessey, another of Mark’s friends, who posted about the events in a Facebook group:

“Mark was a complete nervous wreck before the last leg, he was in/out of our little off track, out in the truck then back in and pacing. As they hit the top turn all the boys had their programs out beating the tables/chairs to cheer Dougie McNair home with the #8… We are lucky in this small town/island not to have any cases of the friggen COVID but we still play by the rules with masks etc. Have to admit, there were a few hugs and handshakes then hand sanitizer afterwards. Couldn’t have happened to a nicer guy too folks… have a great day everyone.”

The Facebook post elicited several congratulatory responses and a question about how the winner collects the large pot of loot. “How does it work when you get paid out, do they give you a check or cash,” queried Louis Bannerman. “There are NO IRS deductions in Canada!!! He keeps it all!” replied Neil J Booth. Hennessey then went on to explain that the teller at the off-track betting site had about $5,000 on hand which was paid to the winner and Mohawk Park was contacted to make arrangements to pay the rest by check.

McGuigan’s tweet which initially showed the scene via smartphone video was met with immediate responses from harness racing Twitter. “I love the guy in the background just going to town doing the funky chicken for the stretch drive,” tweeted Robert Reid, author of the Mohawk Park Horseplayers’ Journal.

“Awesome, fun to watch,” chimed in regular Mohawk Park punter Ryan Willis who himself took down a Pick 5 that returned him close to $22,000 on Thursday night at the Campbellville, ON racetrack.

This $42K Pick 5 sequence started out with a level of normalcy with 3-1 second choice Sophist winning the opening leg, race six. The seventh race was taken by 15-1 longshot Lit De Rose, who actually went postward as a big overlay considering she had won two of the last three Mares Preferreds and was a 3-1 morning line quote in the program. It certainly wasn’t hard to have Lit De Rose on the ticket.

Things started to get interesting when 22-1 outsider Franks Angel found a seam in deep stretch and got up to win race eight as the second longest shot on the board. When Phil Hudon subsequently reined Cantfindabettorman to a 47-1 upset in race nine, he killed almost all remaining live Pick 5 tickets with one leg of that wager remaining. What makes this story even more interesting was the suggestion that the winning bettor may have mispunched his way onto this $97 winner.

“Make it even better, he had Phil by accident in the 9th,” tweeted McGuigan.

Live to the entire $42,457 pool, the gambler known only as Mark didn’t really even need to sweat much as driver Doug McNair sent Sylph Hanover blasting off the gate and pursued the lead despite other fast leavers having the same idea. Once settled in on the front end just past the :27.2 opening quarter, the class-dropping 4-year-old daughter of Somebeachsomewhere out of the Artiscape mare Shes A Fan was never seriously threatened. Pocket-sitter Sly Eleanor N made a brief bid in the lane but she was easily rebuffed and the 1 1/2 length win by Sylph Hanover was good for an $8,000 payday for winning owner Brad Grant.

On this night, however, it was the lone bettor in Sydney, NS with the $36 ticket who was making headlines and showing that you don’t need to be a whale to scoop a pool. You just need to find a way – even if by accident – to zig when everyone else zags.