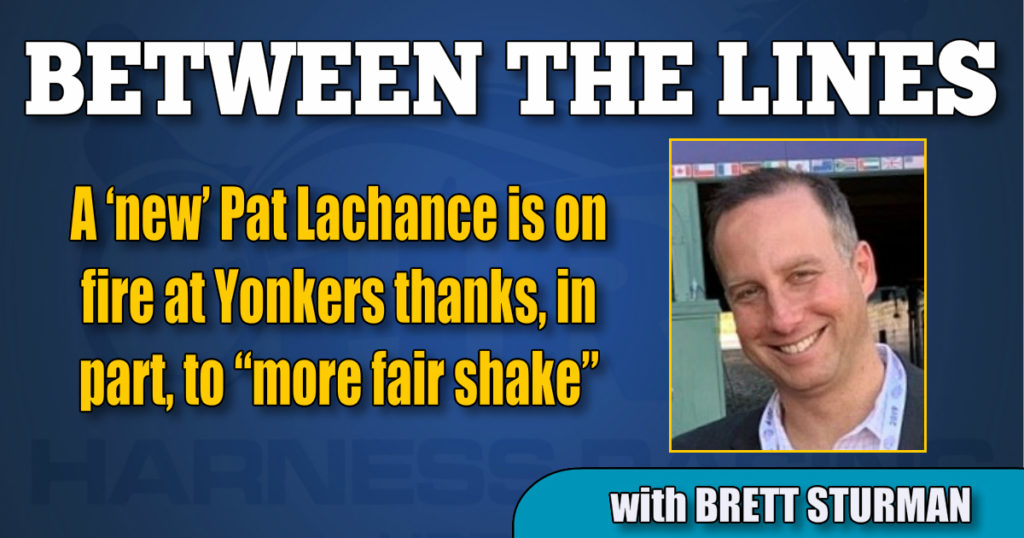 A ‘new’ Pat Lachance is on fire at Yonkers

Following the exit of a number high-percentage trainers under indictment, the trainer/driver said his success is due, in part, to a more level playing field, “I’m doing the same thing I’ve always done, but it’s a more fair shake out there.”

For all the changes that have taken place at Yonkers over the past year or so, perhaps none is more refreshing than the difference in tactics and success that has been enjoyed by trainer and driver Pat Lachance.

Through the years, Lachance could be characterized as an amply capable horsemen with decent racing stock, but also someone that at times could be a frustrating wagering proposition. Typically a driver for horses that he also trains, Lachance has often driven with the perception of a more conservative approach rather than more aggressive attempts. But that’s all changed now and is reflected in Lachance’s increased winning percentages.

For perspective, in all of 2019 at Yonkers as a trainer, Lachance won 11 times out of 128 starts (9 per cent) with an additional 20 per cent of his horses finishing second. This year, just since October alone, Lachance has won 22 times in 66 races, good for a 33 per cent winning clip. And it’s not only the wins, but the manner in which the wins are coming. Lachance has been leaving with a far greater percentage of horses than prior and insisting on the front – many times from outside posts – and hasn’t been shy either about coming first over or getting his horses into outer flows.

Dave Landry | Trainer/driver Pat Lachance (shown at Red Mile in 2017) is on fire at Yonkers Raceway.

During the last two months at Yonkers, Lachance horses that have paved the way have been classy veterans Mike’s Z Tam (4 wins) and The Real One (3 wins). Lachance also has a pair of off-the-pace wins with Alta Leroy – both of which wins came at odds of over 20-1. While Lachance points out that Mike’s Z Tam, The Real One and the rest of his barn has been good, it’s the changed landscape at Yonkers that is just as big a factor as any.

“I think that the competition is a lot different, for obvious reasons,” said Lachance.

Acknowledging it being a touchy subject to address, Lachance continued, “I’m doing the same thing I’ve always done, but it’s a more fair shake out there, and I think everybody is on the same level playing field right now.”

Of course, the elephant in the room is a major difference at Yonkers due to many of the usual highest winning percentage trainers no longer racing at the track due to indictments that came down in March. Even in the time from when racing at Yonkers resumed post-COVID-19 shutdown through the end of September, Lachance was 11 for 51 (22 per cent); already showing an upwards trend that then accelerated into the fall. Lachance is not alone either, in that other trainers have seen comparable improvement in their numbers through the second half of the year.

With an altered set of competition, Lachance has been driving with a purpose.

“Well, here’s the thing,” he said. “Before, I’d have to suck up along the rail in order to stay with those guys, and now I can actually move my horses and do something with them; that’s the difference.

“My horses are more competitive now, and I can do more things with them. It’s really unfair – the last four or five years have been out of control. And I hear people say I’m not aggressive and that – and you can’t be. You can’t make a move when you have one little move against those bearcats. There was only so much you can do, and now it’s different.”

In a post-indictment and post-shutdown world at Yonkers, only new Down Under training sensation Shane Tritton has a higher winning percentage than Lachance (33 per cent to 28 per cent). Lachance’s 33 wins are fourth in the standings to Scott Di Domenico who leads all trainers with 50 wins, though he’s sent out nearly three times as many starters as Lachance has.

Lachance’s next opportunity at Yonkers comes in the sixth race Monday when he sends out So Many Roads, a horse that he’s won twice with recently. Last week, So Many Roads was snapped at the wire after clearing to the lead first over into the stretch. He rates as the 3-1 second choice in the morning line behind Caliber (9-5), and Lachance likes his chances.

“He trained Friday,” Lachance said. “He’s going into the race really good. He doesn’t like to be first up, it’s not his favorite thing. He likes cover, so if I can get him a little bit better of a trip I think he can reach. Once he passes that last one he kind of stops – he takes care of himself – so that other horse that was second-over last week caught him, but he still paced home in :27 and a piece. If he gets a better trip where he’s got cover to the top of the lane I think he’ll win.”