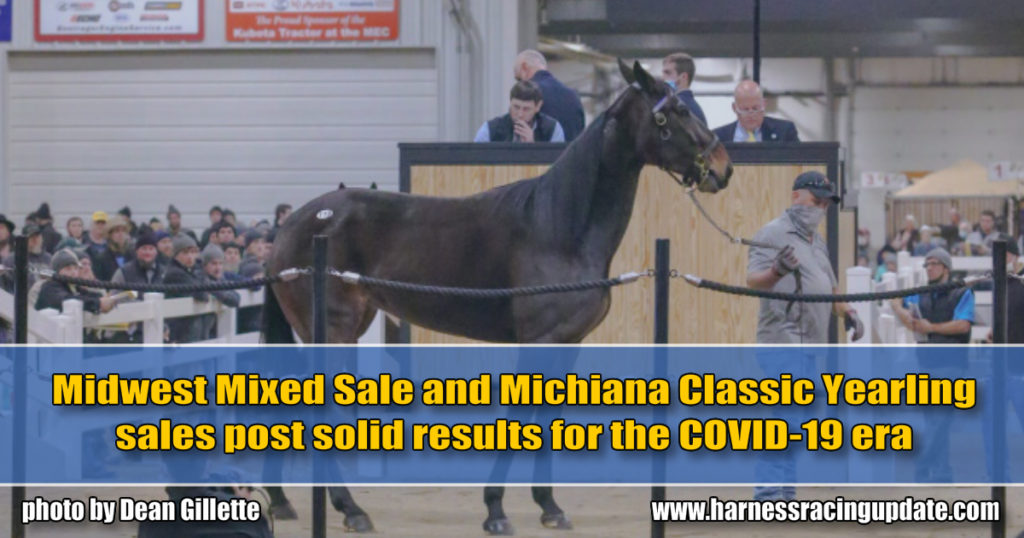 With racing in the books in the Hoosier State, the last big happenings of the year are the two days of sales in northern Indiana. Now in their fourth year, the Midwest Mixed Sale and Michiana Classic Yearling Sale take place the week of Thanksgiving at the Michiana Event Center in Shipshewana, giving horsepeople and breeders one last opportunity to add to their stables leading into the 2021 season. Although numbers were a little soft when compared to 2019, quality racing and breeding stock sold well.

“Overall, I’m pleased. I think the sale continues to develop a niche for those breeding stock mares; those nice race fillies, or nicer mares,” said Jeff Fought, who owns and manages Midwest Auction Company and the Midwest Mixed Sale. “I think we’re getting as much or more for them here than anywhere else.”

Annies Delight, a Bettors Delight—Ideal Weather mare carrying a foal from the first crop of Captain Crunch, topped the broodmare portion of the Midwest Mixed sale, held Tuesday (Nov. 24). Alan Byler’s Price Valley Boarding Farm consigned the mare and her first foal, which will be both Pennsylvania and Kentucky eligible. Lyle Slabach of Topeka, IN paid $43,000 for the young broodmare. Byler also consigned Much Fanfare, A Muscle Hill—Lady Marian mare in foal to Swan For All. Cataloged as Hip 19, the mare is a half-sister to Possessed Fashion, winner of over $600,000. Much Fanfare ranked third on the list of broodmares sold, purchased by Pond-A-Acres for $40,000.

“I’ve got a couple of guys in Canada that are always calling me. I buy these mares private,” said Byler, based in Munfordville, KY. “The Muscle Hill mare I bought at Harrisburg. Ronnie Burke had her as a 2-year-old and she sored up. Annies Delight came out of Vancouver Island. Her and the one from last year, I bought them out of Vancouver Island. I try to buy good stuff and get them in foal and sell them.”

Last year, Byler topped the Midwest Mixed sale with Rainbowinthedark, a full sister to Bettors Wish that sold to John Barnard for $130,000. Tuesday, the consignor brought his last two mares to auction. He is now boarding 41 horses for Barnard at his 65-acre farm in the Bluegrass State.

“I decided I’m going to sell my mares and just board horses. That’s what I’m focusing on right now,” Byler said. “If I find a good mare I’ll do the same thing again.”

Indiana champion Rock Swan headlined the racehorse segment of the catalog. The Swan For All—Jolly Jessica sophomore was a supplemental entry to the sale, the result of a dissolved partnership. Steve Cross signed the ticket for $145,000, acting as agent.

Joe Parisi was one of the more active bidders, using the Proxibid platform for his purchases. Parisi bought 6-year-old Always A Virgin mare Always Giggling, Hip 114, for $70,000. He then proceeded to spend $62,000 on 7-year-old Shadyshark Hanover mare Shady Caroline and $27,000 on Trotting Grace, a 5-year-old Cassis—Maevey Gravy mare. Parisi also purchased Big Peeps, a Rockin Image half-sister to Shamballa. The broodmare prospect sold for $42,000, bringing Parisi’s total purchases to $201,000.

“I think COVID had an impact on the crowd size, without question. Which is where Proxibid came into play and helped a ton in that regard,” said Fought. “I think we had close to 50 or more registered bidders. That changed the game. It’s advantageous to do, and it’s here to stay.”

“We were obviously concerned going in and pleased with the outcome. To be off only two per cent has to be considered a win in 2020,” said sale manager Steve Cross. “The Michiana Classic has proven in a few short years to be the venue for the astute yearling buyer to pluck out a sleeper. Super Final winners Clever Character and JK Going West have reinforced that. While the date is later than we could like, we have to dance around other November auctions and then look for facility availability. The consignors do a fantastic job keeping the individuals show ready.”

Trotters occupied the top three spots on the sales sheet, led by Swan For All filly Brookview Charm. Brookview Farms consigned the second living foal from Credit Winner mare Disbelief, cataloged as Hip 53. Nathan Yoder of Odon, IN, bought the yearling for $35,000.

Mom Checked Out, a filly from the first crop of Dover Dan, garnered a $30,000 final bid. Black Creek Farm consigned the first foal from Explosive Matter mare Czech It Out, a winner of nearly $180,000 with a 1:56.1 mark. She was purchased by Brian Schofner of Porter, TX.

Dan Shetler signed the ticket for Bluebird Bowser, a Muscle Massive colt out of Indiana Sires Stakes champion My Sweet Shiela. Cataloged as Hip 124, the colt was consigned by Premier Acres, agent for Bluebird Meadows. Bluebird Bowser was hammered down for $25,000.

Always A Virgin colt Virgin Honor topped all pacers Wednesday, selling for $20,000. The dam, Do Me Honor, has one winner to her credit, and is a half-sister to Do Me First, dam of near $300,000 winner Kaks Shark Attack. Kelly Goodwin purchased the Indiana and Michigan eligible yearling.

The Proxibid platform accounted for four sales totaling $28,000, and included an international buyer.

A tradition linked to the Midwest Mixed and Michiana Classic sales is the annual fundraising effort focused on a local family in need. This year the fundraiser benefitted the family of Olivia Gingerich, a 10-year-old that succumbed to Myelodysplastic Syndrome (MDS) in October. To help defray medical costs, a benefit supper took place Tuesday evening, and several stallion owners stepped up and donated 2021 breedings to auction. Stallion breedings to Dover Dan, Helpisontheway, Pilot Discretion, Odds On Equuleus, Check Six, Guaranteed, Always A Virgin, JK Endofanera, Freaky Feet Pete and Swan For All were sold during the Michiana Classic, together generating $61,700.