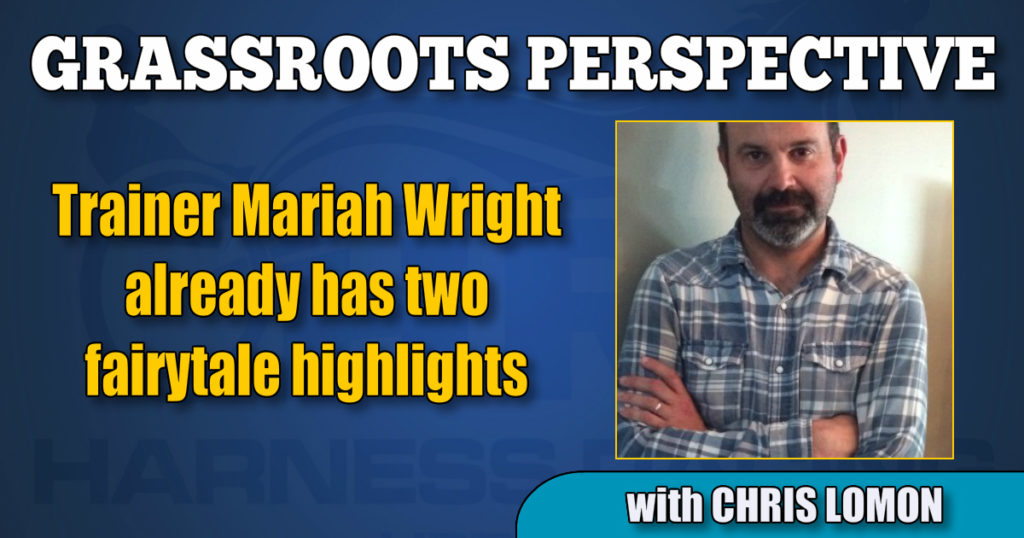 If the young, up-and-coming trainer currently calling Indiana home could come up with a movie title to describe her career, she might very well opt for Chasing Stars, or perhaps, Make Three Wishes.

And what a story it would be for daughter of Michigan Hall of Fame horseman Darrell Wright.

Although it’s early on in her standardbred life, the 27-year-old, who was awarded the 2010 Harness Horsemen International Jerome L. Hauck Scholarship (worth $4,000),already has pair of impressive highlights.

One of them came courtesy of the aptly named Star Chaser, a pacing son of Dontgetinmyway that Wright had claimed for $4,000 on March 1, 2015, at Balmoral Park.

Wright’s father had been training and driving the gelding bred by Tobias Troyer, while she handled the role of caretaker, but she took over the reins of driver ahead of the 2018 Ohio Ladies Pace at the Paulding County Fair.

In this instance, it was daughter knows best, as she piloted 33-1 Star Chaser to a 2:03.4 victory in the final.

“To this day, that is my biggest accomplishment as a driver. Winning the final in the series during Little Brown Jug week… the feeling of winning during the Jug was amazing. I just jumped into [driving]. My horse – he’s a pet – I needed to qualify him for the Ladies Pace because they were short on horses to fill the first race that year. Bill Peters [regional coordinator for theOhioFairRacingAssociation], who does a phenomenal job with that race in keeping it going, he actually called me and asked if I had a horse that he could use for the race. I wasn’t comfortable with anyone else driving him, so I told him that I would do it. Surprisingly, in what was my first drive, he won.”

Wright, a 2010 graduate of Stockbridge’s Leslie High School, who carried a GPA of 3.75 and was a Congressional Medal of Merit winner during her senior year, netted another notable achievement a few months after her Star Chaser moment.

This one came on the hooves of the veteran pacing mare Make Three Wishes in the Ohio Ladies Pace Series Championship on Sept. 18, 2018 at Delaware County Fair.

“Winning at Delaware was obviously the most emotional and a big highlight. That was special too because my mom [Gina] used to work for [trainer] Joe Putnam. And Joe trains Make Three Wishes, so it kind of makes the world come full circle. That was one of my mom’s first jobs, working for Joe. He had Make Three Wishes, who really needed to get her confidence going, so he trusted me to race her at a few fairs and it worked out that we didn’t just race, we won a few races together. It made for a very special summer.”

Yet Wright is certainly no one-season wonder.

Star Chaser and Make Three Wishes aside, the star-on the-rise conditioner has worked hard to make a name for herself on and off the racetrack.

A standout in the classroom and on the court, Wright received the Coaches and MVP Awards in Varsity Volleyball during her junior and senior seasons. She also volunteered at the Ingham County Animal Control Shelter and at Leslie Outreach.

She continued her scholastic studies at Adrian College with a double major in biology and business, and a minor in chemistry.

But her favorite subject is, without a doubt, horse racing.

“I’ve grown up in racing. My dad has been involved for a long time, my grandpa [Richard] used to race horses in Michigan, as did my uncle, Jim. I started paddocking and doing everything probably before I was allowed to, at least according to the racetracks. I played volleyball in high school and went to play volleyball in college. From there, I got a job to come to Indiana between my junior year and senior year of college. I was a double major in biology and business, with a minor in chemistry. I realized – I wasn’t wasting my time because I love college and learned a lot – but I was never going to use the degree because I’ve grown up in this world and I always wanted to do it.

“I don’t have my degrees yet. I took two years off and then started again, and then took another year off. I start classes again in January, so I’m slowly working my way to achieving that goal. I want to have my degree before I’m 30. Not that I ever plan on using it for anything, but I feel with the time I’ve invested that I should finish it out. I went to a small private college. I actually wanted to be a vet, but I just realized in school that I wanted to be a vet because I wanted to stay with the horses. But my heart was in being a horse trainer and groom, so I stuck with that.”

The business world’s loss has been harness racing’s gain.

Wright has been able to use some of the life lessons learned in the classroom and on the gym floor, and add certain skills she acquired into her horse racing repertoire.

“The one thing is, especially with volleyball and school – I was just talking with someone about this – is that in high school I wanted everything to be perfect. I wanted to be the person with straights A’s, and then you get to college and you have a professor give you a C. As a freshman, you’re just baffled by that because you think to yourself, ‘No, you’re supposed to do better.’ You always strive to be the best. While volleyball is the same in that you want to be your best all the time, you sometimes have to find that happy medium of knowing when it’s okay to step back and say, ‘Okay, good enough is good enough.’

“That’s the same thing with how you train your horses. If you push them too hard, then they’ll burn out. It’s the same when it comes to school. If you study too much, it just becomes a big blur. Horses, you want to make them the best they can be. You don’t want to over-train them. I look at that as being the same for volleyball. If you over-train, your muscles will get tired, and then you’ll get mentally drained. Being an athlete and being in school, you have to balance everything you do to make sure you get the ideal results. Too much is too much.”

Fortunately for Wright, she’s put those words into practice.
And while she might not always get the desire result on the racetrack, there is a measure of pride she rightfully takes in crafting her own blueprint for success, complemented by sound advice she’s received along the way.

“The horses always come first. My dad instilled that in me. One, they are our livelihoods, but most importantly, if they are not on the top of their game, we’re not on top of ours. They always have to come first. If that means you don’t get to go to your friend’s house on Friday night, then so be it. That was hard in high school, but now it’s something I don’t blink at. It’s habit.

“The other thing is that there is no right or wrong way to do something. I’ve worked for a lot of different people and I’ve paddocked for a lot of different people. I worked for [top trainers] Ron Burke and Nancy Takter, and numerous people who have brought people to Indiana for the Grand Circuit races. They all do things differently, but they are all successful. You can never stop learning those different ways. If you are convinced that your way is the only way, you’re letting the game pass you by.”

For Wright, who is concentrating fully on training, it’s just getting started.

She doesn’t need to be a star chaser or make three wishes, although she’s certainly happy to have her named associated with those words.

Sharing training duties with her father (he’s currently in Minnesota and she’s in Indiana), Wright will soon be on the move to Ohio, where she’ll take a string of five to six of the 11 horses they train.

If past performance is indeed the barometer of future success, there’s no doubt she’s on the right track.

“I love this sport and looking back, I knew it’s what I always wanted to do. I’m happy with how things have gone, but I’m going to continue to work hard every day.”