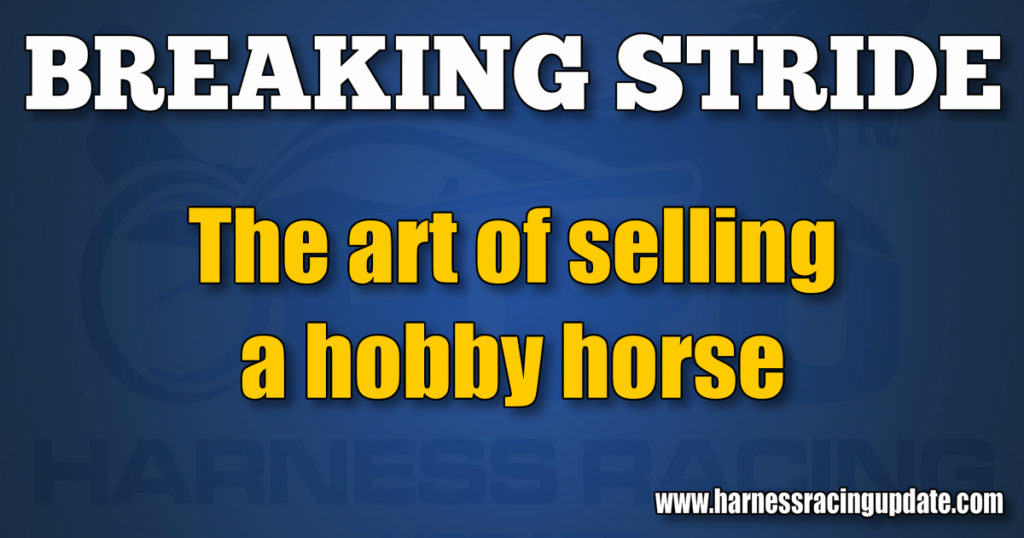 The art of selling a hobby horse

“My latest hobby is etymology. Every morning an app dings me and explains the origin of a word.”

“That’s where the action is, my friend. Today’s word is hobby.In the 13th century, the word hobby referred to a small horse. Then it came to describe a toy horse, a hobbyhorse. Hobbyhorse evolved in the modern sense to a favorite pastime, something that you do typically for fun, and you typically do it fairly regularly.”

“Mildly interesting.” Then he asked, “Do you think harness racing people are hobbyists, business people, or sporting people?”

I thought for a moment, “Hmm, tough question. I would go with hobbyists.”

He nodded. “I agree. There are undoubtedly a few business people scattered in the harness herd. If you did a deep analytical dive on the spreadsheets of owners racing horses and gamblers gambling on horses, the business side of the equation would not be favorable.”

“You could put me in that category. I say horses are my investment, but I’m addicted. On the rare occasion when I make a buck, I plow everything right back into a new horse. The idea you are going to get rich buying and betting racehorses borders between delusional and illusional. Still, it’s so much fun to try to beat the odds.”

He said, “For many people, hobbies are a big part of their psyche. The hobby becomes their world, and they stay with it for life.”

“Harness players are loyal and tough, but the demographics are horrible. I caught the racing bug in my forties. I always felt like the youngest guy at the sale or in the grandstands. New players are rare birds.”

He shrugged, “Ageing demographics are a problem for plenty of hobbies.People tend to pursue the same activities throughout their lives because hobbies are a powerful way to hold on to our sense of self as time passes and lives change. Hobbies allow people to travel back in time, to connect with the people we were when we were starting our lives.”

I nodded, “That makes sense and probably applies to horse racing.”

“Brain experiments find that people in their seventies or eighties who play the violin, ride in old hot rod cars, or sing in a choir are often momentarily transported to earlier moments in their life when they did these things.”

I asked, “What about you, a former executive and a young retiree? Do you have any hobbies?”

“One. Not very many people know about my little passion.”

I opened my hands, “Do I need to pull out the thumbscrews.”

He smiled, “I am a bibliophile.”

“You study the bible?”

He chuckled, “No, I collect old books.”

“You never talked about that. Where did that come from?”

“At the tech company, 30 years ago. The money was flowing, and one of my co-workers, Wally Davenport, suggested rare books as a good investment, sort of an alternative to buying rare art or rare coins.”

“Pretty much. We didn’t know anything about rare books, but we figured we were smart, and we would learn. The idea was that this would be a great place to stash and increase our money.”

“No, we spent a lot of money. The rare times I sold a book, I plowed the money back. I got the book bug and have been collecting ever since. It’s fascinating. Collecting books is one of those things that sneaks up and grabs certain people.”

“Owning rare old books, looking at them, and reading them is enjoyable. But Trey, the hunt, the research, and dreaming of owning certain books is addictive.”

“What kind of books?”

“Well, you know how your sport has breeders, gamblers, owners, trainers, pacers, trotters, young horses, claimers, and other specialties?”

I blinked. In my hesitation, David smiled and raised his index finger and said, “Bookmark this moment.”

“While you are sitting there, confused. Your confusion is my fault. My method of introducing book collecting was a mistake. I should have been clearer. I should have used a simple explanation and engaged you in a dialogue.”

“I agree, you were a tad persiflage.”

He raised his eyebrows.

“My etymology word from Monday. The word comes from 1757, French from persifler,”to engage in light, flippant banter suggesting an ironical or frivolous treatment of a subject.”

He chuckled. “Guilty as charged. My introduction was a mistake. Book collecting and horse racing are complicated emotional pastimes. When face to face with a possible recruit on the doorstep, we need to tread carefully. Now, where were we?

I said, “Modern firsts and what sounded like a swear word.”

He collected himself, then spoke slowly, “The modern era in book collecting is the century between 1900 to 2000. First is slang for a first edition. My goal is to collect a copy of the top fiction book published each year. For example, pick a year between 1900 and 2000, any year.”

“Okay, since my collection consists of exactly 100 books, I know them by heart.The Maltese Falconby author Dashiell Hammett is renowned as the most influential fiction book published in 1930. Published by Alfred A. Knopf of New York City, The Maltese Falcon started as a serialized story in Black Mask, a pulp magazine that focused on crime fiction.”

I asked, “That’s it, a rich guy like you, a hundred books, that’s the end of the story?”

“No, absolutely not, a book collector’s story never ends. I constantly replace each copy with a cleaner edition, an edition signed by the author, or a copy with a mint condition dustjacket. I am currently trying to extend slightly outside of the modern era to the first editions of books published before1900. ”

“And what about the swear word?”

He smiled, “A bibliophagist refers to collectors who enjoy reading the books they collect.”

I nodded, “Okay, I get it. Your second answer did not make me feel like an idiot. I see where you could find something as stupid as collecting books, not stupid.”

“No, try explaining harness horse racing to someone. I remember the first time I asked you about your hobby, and you said, I’m into yearlings for stakes racing. Your answer was very confusing and flippant.”

“Try rolling more clearly, uniquely. Make the audience want to go forward. Pretend you just met me, you mentioned you like horse racing, and I asked you what sort of racing?”

I cleared my throat and used his example to say, “I’m a fan of trotters. They’re large horses and move like carriage horses. Each year, I buy a baby, watch it grow, pay someone to take good care of it, and teach it how to race. Every day I dream that when the young horse is old enough to compete against others, it will bring me thrills. The process is fascinating.”

He nodded. “Very few people listening to that explanation of your hobby would be confused or intimidated.”