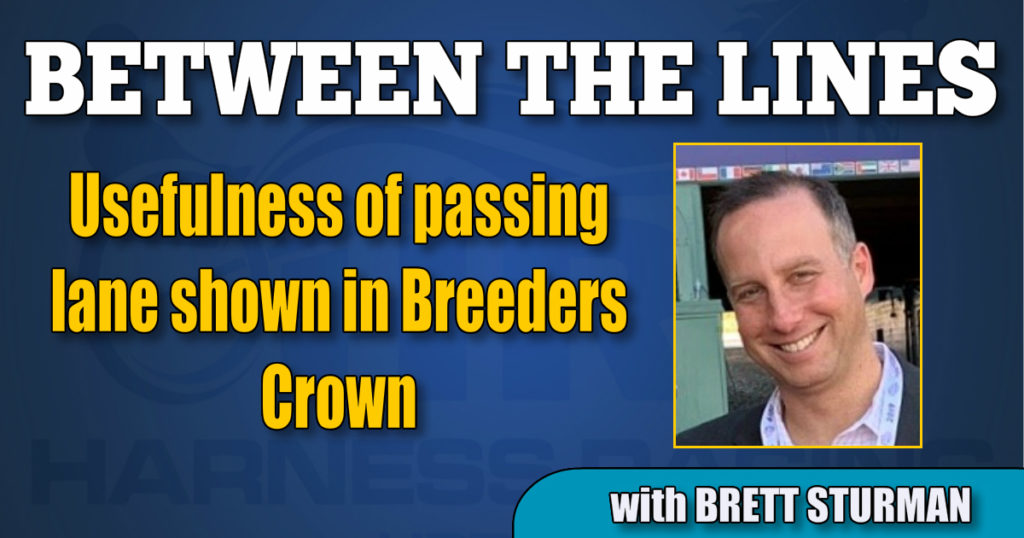 This year’s event at Harrah’s Hoosier Park showed the passing lane has a place on any size track.

When it comes to the never-ending debate of what role a passing lane should play in harness racing, the discussion relates primarily to the smaller sized tracks. There’s generally a consensus that the larger a track is, the lesser the need is for a passing lane. With that in mind, comes the unpopular opinion that this year’s Breeders Crown showed the passing lane has a place on any size track.

At Harrah’s Hoosier Park, a seven-eighths mile track, the passing lane was pivotal – though not exclusive – in determining how a number of Breeders Crown races were won.

In short, the argument against a passing lane goes something like this: If drivers know they can race on the inside and wait for a passing lane, they’ll be less aggressive and it leads to more boring and predictable races. It disincentivizes movement in a race, especially on tracks where it can be disadvantageous to race on the outside. But, in this year’s Breeders Crown it seems like almost just the opposite happened. Many races had decent flow to it, and race after race yielded memorable finishes.

Let’s start with the biggest upset in Breeders Crown history. In the 3-year-old colt pace, the exhilarating stretch run that saw horses come from everywhere to try to take down Tall Dark Stranger would have likely looked different in a stretch without a passing lane. Cattlewash had the most immediate inside shot at Tall Dark Stranger off a pocket trip, but there were two additional horses taking runs up the inside. For all of the commentary that makes it seem like wins for pocket-sitting horses with a passing lane is a piece of cake, Cattlewash had nearly the entire stretch to pass on the inside and couldn’t get by. Rather, it was a 200-1 outsider that swept widest of all for the win.

Similarly, in the open mares pace, Shartin N was allowed most of the stretch through the passing lane to get by Kissin In The Sand and wasn’t able to get on terms with that leader. Sometimes it works out when horses can parlay a passing lane trip to a win and sometimes it doesn’t work out. There were a number of other Breeders Crown winners, including Amigo Volo, Fire Start Hanover and Gimpanzee, as examples, that were able to take leads into stretch and win, despite their competitors having additional avenues to race by, if good enough. It continues to disprove the fallacy that any dime-a-dozen horse can sit a pocket trip and win if there’s a passing lane.

How about the finish in the 3-year-old filly trot event? On the surface it might look like Next Level Stuff was a quintessential lucky horse that won because she drew the rail and then just waited for the passing lane, but that would be cheating her. In that race, it was actually Sorella that got the pocket trip and once Next Level Stuff got the inside opening she had to out-sprint not just the race leader but also the pocket-sitting Sorella who had the length head start. The point is that in both these cases horses won not solely because of a passing lane, but because they were given a chance to race when they needed to.

In a couple of races, horses that won up the passing lane did so after having to re-rally against outside horses who had already had the jump on them, or had to rely on longshot leaders carrying them far enough until the open stretch became available. Racing on the inside isn’t always an open invitation that guarantees being able to reach the passing lane before it’s too late.

It was the same thing with evenly split results in the 2-year-old Breeders Crowns where two races (both trots) were won by horses utilizing the passing lane. On the pacing side, one race was held by the filly that led into the stretch and the other race was a dead heat between a horse on the lead and a horse from well off the pace. Just from the standpoint of excitement, what’s not to like of close finish after close finish?

A passing lane on a track such as Hoosier may seem unconventional, but it’s not a first. Balmoral Park was a one-mile track with a passing lane and I don’t recall much controversy over whether or not a mile track should have a passing lane. In fact, handle used to be quite decent there in its heyday.

Even if you were to compare the flow of a race at Hoosier to that of Woodbine Mohawk Park or the Meadowlands, is there really that much of a difference despite the fact that Hoosier has a passing lane? One thing I will concede at Hoosier is that the outside horses generally do have a more difficult time than the inside horses. In so many of the Breeders Crown eliminations the week prior, race after race saw the outside group of horses fizzle in the stretch while ground-saving horses shot through for wins. But again, I see the same thing all the time at Harrah’s Philadelphia where if the outside flow of horses can’t reach the leader with any momentum by the top of the stretch, it becomes that much more difficult to kick off cover and gain any ground. That’s just the nature of harness racing.

The Breeders Crown at Hoosier Park proved that there can be high quality racing on a track with both a long stretch and a passing lane. It comes down to giving horses the chance to win if good enough. What more could you ask for?