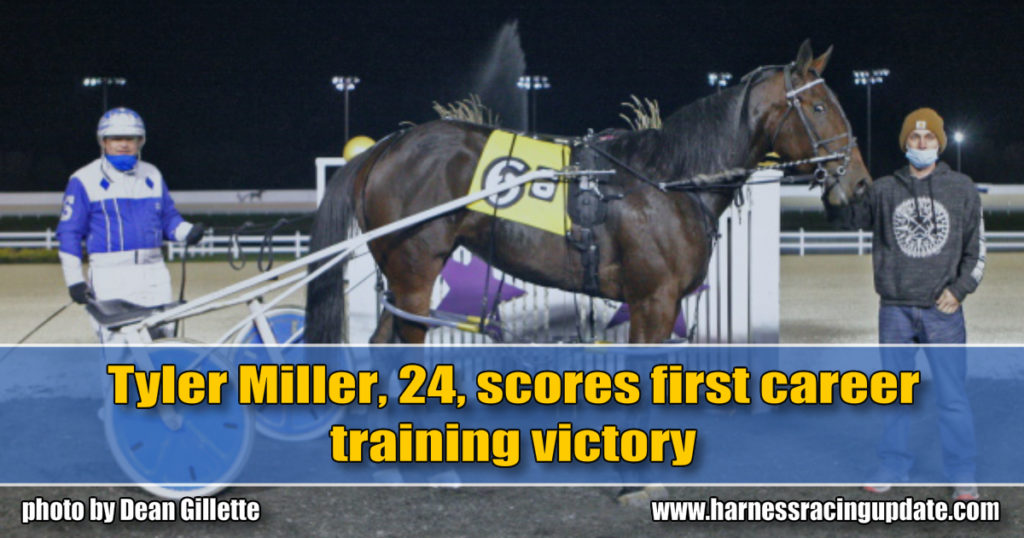 Two years ago, Tyler Miller was a regular competitor on the northern Indiana pony racing circuit with an eye on harness racing. Tuesday (Nov. 3), the 24-year-old sent out his first winner at Harrah’s Hoosier Park. Skyway Rockatop, a freshman from the first crop of JK Endofanera, paced to a 1:55.4 score for Miller, who co-owns the pacer with M & M Racing. The victory came in Miller’s fifth start as Skyway Rockatop’s conditioner.

“It was great. I don’t know, I can’t really describe it,” said Miller, who lives in Shipshewana, IN. “There was a lot of work involved. I bought the yearling last year at this time. It’s been a year in the making I guess. It’s just a great feeling. To see that horse go across the wire first, that was unbelievable.”

Miller had dabbled in the breeding side of the business, but dipped his toe in racing last season with Passionate Deo, a Captaintreacherous filly that he purchased at the end of her freshman campaign and sent to top Hoosier Park trainer Jamie Macomber. As a 3-year-old, she won five starts and earned nearly $40,000 in 2019 for the owner. He reinvested some of the proceeds at last fall’s Hoosier Classic Yearling Sale, purchasing Skyway Rockatop for $10,000. Miller trained down the filly over the winter and sent her to Macomber to race at Hoosier Park. In six starts, the pacer registered two fifth-place efforts and earned $700.

“It’s just hard when you have a horse like Skyway Rockatop because she was a 2-year-old non-winners of one to be claimed,” Macomber said. “She trained super, but it’s just so hard to pay a training bill on a horse like that when you can train them yourself. He asked if he could bring her home so that he could work with her and learn.”

“We weren’t sure what kind of 2-year-old she would be. We always thought she would be a good 3-year-old, so that remains to be seen,” Miller said. “To get a win out of her, that’s mission accomplished for her 2-year-old year.”

The victory did not come immediately. In her first time out for Miller, Skyway Rockatop finished ninth. However, a week later she hit the board for the first time, finishing third before being elevated to second by judges. In her last three starts, the filly has hit the board each time for driver Andy Shetler, with the latest effort producing a maiden-breaking victory.

“I think it’s awesome, especially at this time in our industry,” said Macomber. “He’s young; he’s very enthusiastic. He loves it. He has everything our sport needs.”

Miller is quick to credit Macomber for her work with the filly, now possessing purse earnings of $7,510.

“Jamie did all the hard work for us. She had her rolling pretty good, and I just stepped in at the right time. I give Jamie the credit,” he said.

The young horseman works a full-time job at R.H. Yoder Woodworking in Shipshewana while also jogging a trio of babies and shipping and racing Skyway Rockatop at Hoosier Park. He hopes the three yearlings in training will make it to the races in 2021, so he plans to focus more on racing. He wants to move to more of a part-time status next year at R.H. Yoder in order to pursue harness racing to a greater degree, including competing at the fairs next summer. One of his yearlings is Michigan bred, and the trainer hopes to explore the program to the north.

“I’m at the barn all the time now. I got here a little before seven this morning and I’m still here working (at 4 p.m.). I don’t mind it one bit,” he said, laughing. “Winning makes it way easier. It gives you something to look forward to when you have a shot.”

Miller is in the process of selling his breeding interests, which includes ownership of two broodmares and half of a third. He is keeping one JK Endofanera baby that he bred, one of the trio he is now training. The horseman would like to follow pony racers like LeWayne Miller and Alex Udell that have moved to standardbreds and carved out successful niches. This summer, Miller traveled with Udell to Indiana fair circuit races, where the veteran showed him the ropes and taught him a lot about the business.

“Right now I’m just having a little fun with it. If it goes well, I don’t know where it could lead. It could lead to bigger things down the road,” the trainer stated. “If I could make a living doing this; that would be Plan A. That would be awesome. We’ll just have to see how it goes.”