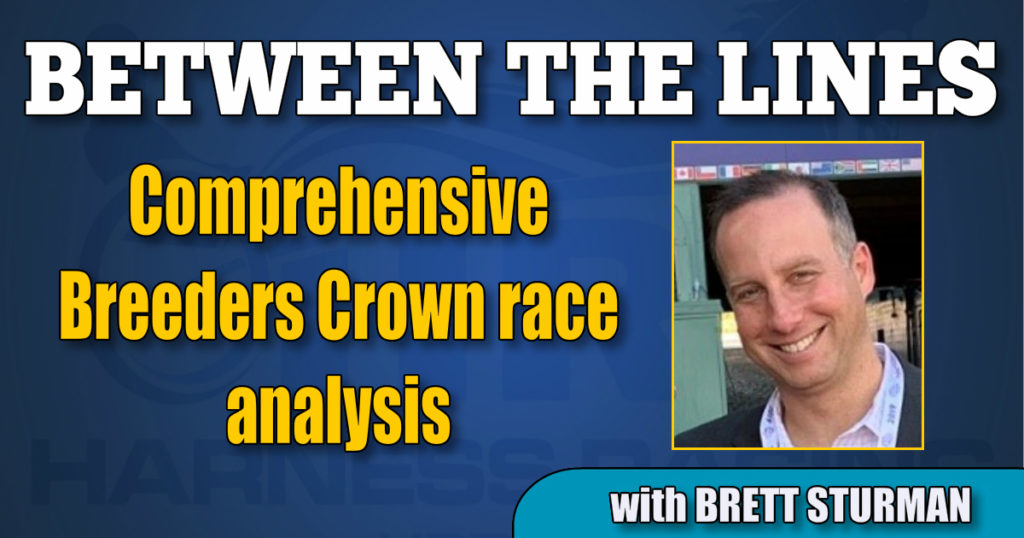 With the four 2-year-old Breeders Crown races taking place tonight (Oct. 30) and the remaining eight taking place on Saturday, here is how I see all 12 championship races shaping up.

MAZZARATI sprung the $50 upset in her elimination last week in a race she shouldn’t have been as widely overlooked as she was. Not at her best two back at Lexington in a race she still wasn’t far off in a blanket finish, last week she was able to angle off the inside into the stretch and outsprint her rivals. Tetrick will look to have her well positioned once again. PRESTO grinded first over in her elimination and was outkicked by a rival who saved ground on the inside; came up short though two back when had the dream trip. GOTTA BELIEVE goes for a barn that can’t miss right now; offers a big price once again from the outside post. Sears was getting after ITERATION even before the stretch last week and she obviously wasn’t at her best; maybe it had to do with the off-track. LADY CHAOS is another that’s tricky. She didn’t fire at the Red Mile two back but then rallied up the inside to win her elimination after being gapped a bit. SWIFT SWANDA was closing late in her elimination; would need a lively pace to set it up for her.

VENERATE was up to the challenge of CAPTAIN COREY in their first matchup together last week and was able to turn back that foe in the stretch seemingly without too much issue. Mohawk Million champ VENERATE will be favored this time around as he should be and should win. The unbeaten run of CAPTAIN COREY came to an end last out despite giving a game chase; needs even more to take the top spot. IN RANGE is another that was overlooked in his elimination. He won at 6-1 odds despite being runner-up in a world record mile two back; came home in :26.3 last weekend and was forwardly placed into a fast opening quarter as well. BROOKVIEW BOLT can save ground from the second tier; could be in the mix as a Burke longshot.

SCARLETT HANOVER made her first start for Burke last week and gave it a pretty good try on the first over attack. She was caught following a long slugfest through the stretch with another rival but that’s okay; I think she’ll be best. NOTORIOUS PINK quarter moved and then threw down with the aforementioned filly last week; paced in 1:49 two back but needs to overcome the outside post and won’t be easy. I still can’t believe that JK ALWAYSBALADY got up last week; looked like she had no shot with about 50 yards to go. I’m still inclined to play against now, especially at the shorter price. FIRE START HANOVER was passed by a massive longshot in her elimination; both prior miles at Lexington were strong. BLUE DIAMOND EYES was never involved last week and well beaten, though Dave Miller does stick here over upset winner CONTINUALOU; that’s interesting. What do we do with SOMETHINGBEAUTIFUL? Indiana-bred found her motor late cutting to the inside but then seemed to flatten and then broke; worth some type of play if she’s suddenly at double digit odds.

PERFECT STING may eventually lose but there isn’t a reason to think it’s going to be in this race. After getting somewhat of a scare put into him two back and three back, he was dominant in his elimination and will be up to test from #3. SOUTHWIND GENDRY closed in :25.4 as the other easy elimination winner and is likewise tough to knock; potentially great match up coming. ABUCKETT HANOVER arrived late on the scene last out and took a lot of action against ‘Sting’ two back; Metro elimination winner could have a say for Alagna. SUMMA CUM LAUDE has had legitimate chances to beat Perfect Sting in recent races but wasn’t able to do so and then last week couldn’t mount the same challenge after being hard used to the lead; one of these days it might work out for him. CAVIART LOTUS can fly late; would be quite a spot to break the maiden. JK GOING WEST is an overachiever and tries hard; rail could keep him close.

It’s been one thing or another for MANCHEGO since the summer, but she closed to be second here last week to Gimpanzee where she shows a last quarter of :25.1. Has that ever happened for a trotter before? No need to overthink this one; likely best if she trots. Key adversary PLUNGE BLUE CHIP races for the first time since that fast win on Jug day over a month ago; obviously is more than capable. WHEN DOVESCRY sparkled against these on Hambletonian Day but hasn’t been able to replicate since; exists a confidence builder at the Meadowlands. PAT MATTERS responded last out to first time Lasix; takes the big step up but I wouldn’t discount entirely for trainer Nifty Norman. FELICITYSHAGWELL S is somehow only 1 for 20 over the past two seasons; she’s better than that and has come close against these on occasion.

This race is wide open and I’ll take a swing with a 20-1 filly in MAY BABY. She closed last out with mild interest for Yoder off a no-shot trip; may not be much worse than anyone else in here. LOVE A GOOD STORY closed well last week but gave up valuable ground to the race winner; has a dangerous closing kick and is another price possibility. It’s hard to split SPOILED PRINCESS, SORELLA and HYPNOTIC AM. All three are class fillies that were all right there against each other last week; trip could tell the story and I’d be inclined to go with whomever ends up offering the better prices. Credit to NEXT LEVEL STUFF for getting the elimination win last week when the inside opened up; I’d be surprised if she does it again.

PARTY GIRL HILL was able to follow up her win against the colts in the Tattersalls with a measured win last week against PEAKY SNEAKY who put up a decent fight. She closed in :25.1 from first over and it looked like she did it mostly on her own; a machine. PEAKY SNEAKY posted a 1:48 win two back but couldn’t fend off the unbeaten filly last week; a win wouldn’t be out of the question at her absolute best. LYONS SENTINEL was able to sweep from third over last week to track down JK FIRST LADY; both were able to benefit from a collapsed pace up front. DRAMA ACT angled to the outside behind PARTY GIRL HILL around the final turn last week, tipped off that cover in the stretch and was sprinting quite well to the wire.

AMIGO VOLO is the sharpest of this bunch right now and is now squarely the one to beat. His 6-5 morning line does seem short, but the Futurity winner came back last week to win in 1:51.2 which was a full second quicker than the other elimination; looks tough. READY FOR MONI faltered in deep stretch after wresting away the lead first over; I’m still not sure that he’s as sharp as he was earlier on. BEADS had every chance up the inside to get to AMIGO VOLO last week but couldn’t gain; speed will be coming though. It’s a little peculiar that Svandstedt has now elected to drive BACK OF THE NECK twice instead of Zeron; was in a winning position to take the Futurity two back when he broke. CHESTNUT HILL has a flair for the dramatics; could be charging late once again at a big price. CAPRICORNUS flew widest from out of the clouds to score the 60-1 shocker; did it against the softer elimination.

KISSIN IN THE SAND has been flat out dominant this year and it showed last week. After leaving for position from post 9, she two-moved to be first over, wore down the leader and posted a last quarter of :25.3 as if it were nothing. She’d need to regress in order to lose. SHARTIN fought on last week but in the end it was the second consecutive time that she’s been beaten by the presumptive race favorite; excited to watch these two go at it again. WARRAWEE UBEAUT was used to the lead in her elimination and in the end had the passing lane but couldn’t get near the top two. ROCKIN NOLA gest the acid test for class; Indiana-bred mare has won half her lifetime starts but would need to go quicker than she’s ever gone before.

The legend of TALL DARK STRANGER continues to grow. Once again, it looked like another foe was closing in on him but he repelled that challenge when it counted as he always does. Gingras will have him on the lead by opening quarter one way or another and the others will have some pacing to do in order to get him. WARRAWEE VITAL took dead aim last week in deep stretch at the big favorite but couldn’t sustain and it was a similar story two back at the Red Mile. CATTLEWASH set a world record three back but then tamely backed away from TALL DARK STRANGER next out. He rebounded last week to take his elimination in another fast time; should give the champ a better go of it than he did two back. NO LOU ZING is yet to miss the board this year and took the fight to filly Party Girl Hill two races prior; has the speed to contend.

KATKIN AMERICAN is stepping up to take on a couple of powerhouses but he might be this good. Having not raced last year at 4, he’s 7 for 9 this year and that race from Sept.19 stands out. In that race, he ended up parked every step and ended up taking it to LINDY THE GREAT – who is accustomed to racing against these types – and wound up a rather incredible second. Might be worth a shot. ATLANTA has been her stellar self through much of the year and she and GIMPANZEE have taken turns beating each other over the course of the past month or so; could come down to the trip for the co-favorites. Hard to believe that MAJESTIC PLAYER A was 5/2 last out in a race that included both GIMPANZEE and Manchego; at least will offer a more realistic price now and does have an inside post.

BETTOR’S WISH has been the most consistent of these all year and aims for his fourth consecutive win. Having just missed in the Breeders Crown last year, he seeks to make amends now and has the speed to get involved early from the outside post; will warrant his short price. THIS IS THE PLAN had the length of the stretch to get by BETTOR’S WISH at the Red Mile two back but couldn’t close; will likely have to come from off the pace with second tier start. DORSODURO HANOVER hasn’t been the easiest horse to predict this year but he’s always capable; lands a decent post to setup his rally. DANCIN LOU was closing with BETTOR’S WISH three back in the Dayton Derby; he’s better than what those last two lines show. CENTURY FARROH is a possibility but always seems to be a shorter price than he should be. SECTIONLINE BIGRY stepped up here last week and seemed motivated late.