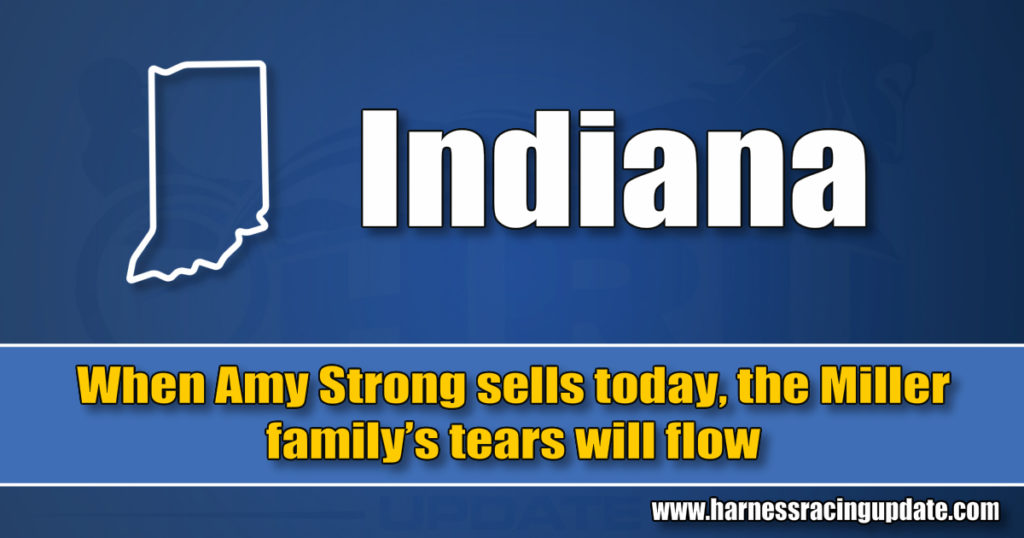 Named as a tribute to their daughter and sister that died of leukemia in 2019 at age 20, the Rockin Image filly out of Legacy Lane Farm’s Hall of Fame mare Fox Valley Monika will sell as Hip #125 in the first of two sessions of the Hoosier Classic Sale in Indiana.

Today will be a difficult and emotional day for Duane Miller, his wife, Dora, and their three sons, Darin, Ryan and Terry. Today (Oct. 23) and tomorrow (Oct. 24) marks the annual Hoosier Classic sale at the Indiana State Fairgrounds, and Miller’s Legacy Lane Farm will offer 12 yearlings, six of their own and six as an agent. Each fall all of Miller’s hard work breeding, foaling and raising babies pays off as he sells his consignment in Indianapolis. This year, however, will carry extra significance. When Hip #125, a Rockin Image filly named Amy Strong, enters the ring this afternoon, he admits he will probably be fighting back tears.

“We’ll cheer extra hard when she’s racing because of who she is named after and the situation,” Miller said recently. “It will also make me cry to see her go through the sale. There is certainly a special place in our hearts for this filly.”

The filly is a product of Legacy Lane Farm’s Hall of Fame mare Fox Valley Monika, producer of millionaire Glass Pack and Doubletrouble, Our Dragon King and Can’t Touch This, each winners of more than $400,000. Moreover, while she offers a pedigree packed with performers, her name is a tribute to Miller’s daughter, Amy, who valiantly fought leukemia before succumbing on Sept. 22 of last year. Thirteen months later, the loss is still fresh in his mind. Only 20 years old, Amy shared a love for horses, both in her work around the farm and in her pursuits on the pony racing circuit.

“If you knew Amy, you knew she was my little horse buddy. She was the one that, before she would leave on a Friday or Saturday night, she would come out and say, ‘Hey dad, I’ve got a little time yet, do you want me to clean a couple of stalls?’ That’s the type of person she was,” Miller said. “Some of the other kids would try to slip out the back door before I would see them leave so I wouldn’t ask them to help. It was because she enjoyed it and she wanted to. There’s a difference: do you have to or do you want to. She just always took a lot of interest in the horses, the pedigree, the sires.”

Amy Miller was diagnosed with leukemia in the summer of 2016. Ironically, the night before she received word of the diagnosis, she won her first stake race on the northern Indiana pony racing circuit, steering Hilltop Nite Rage to a win. Throughout her treatment, the trophy from that first big victory accompanied her. After a few months of treatment, she was in remission, but still received chemotherapy monthly for the next two years. Amy remained active with the pony races, driving as often as possible.

“She was in remission for three years. For those years, she was just as active as before this all started. You would have never known; she never slowed down,” Miller said. “Even her last year of taking treatments, she would come home from the hospital on a Friday and she was feeling sluggish. The chemo really takes it out of you. It wasn’t even a question of who we were putting down on her ponies that night.”

At home, Amy was just as involved with Legacy Lane’s broodmares and babies. At one point, she had to stay in the hospital for a two-month span. When she returned home, she was determined to familiarize herself on the newest batch of yearlings.

“I was out in the barn one day and she said, ‘Dad, I’m behind on these yearlings.’ We had just weaned them when she left and they were a lot bigger,” he said. “She said, ‘I don’t remember all the dams of these yearlings. As soon as I start feeling better, I want to get up to speed on all of this stuff again.’ That’s the type of interest she took in the horses.”

At the 2017 Hoosier Classic sale, Newport Party, a full sister to Amy Strong, topped the sale, bringing $145,000. Amy led the yearling into the ring before the filly sold to Bo DeLong.

“That was Amy’s special horse. She was always taking videos of her on her phone. That was her little queen,” Miller said.

Cancer is a cruel disease, and Amy’s remission would not last. In April 2019, the leukemia returned, even as recent blood tests told a different story.

“All was well, but you still do monthly checkups for the next few years. Eleven days before she was re-diagnosed, she had a regular checkup and the doctor said, ‘Amy, this not only looks good, this looks excellent. You are recovering way faster than we could have even hoped for,’” Miller said. “Eleven days later she was telling me how she had a stiff neck and it went up the side and into her ears. As a dad, I was always fearful of it coming back. On a Sunday evening, she told me that her neck was so stiff. I said, ‘Why don’t you just call your doctor tomorrow morning to come in and have it checked out.’ She went in that next Monday morning and she never came home again.”

Miller moved his daughter to a hospital in Cincinnati for a bone marrow transplant. Amy stayed at the hospital, with that first trophy at her side, for four months before her body could no longer withstand the ravages of leukemia. Her parents and siblings, while grieving her loss, wanted to do something to remember Amy.

“The mare’s always been special to us, as she was to her. That mare has kind of made us. Everybody from the family wanted to do it, ‘Let’s name one after Amy.’ She was the obvious one to name after her,” Miller said.

Amy Strong is an embryo transfer, which Miller understands might concern buyers due to the stigma behind them. Perhaps he would not have a foal from Fox Valley Monika at this year’s Hoosier Classic sale had it not been for the efforts of Victory Hill Farm’s Jeff King. The mare was terribly infected, and needed three rounds of treatment. After the first round, however, she was in heat, and King suggested the transfer.

“He said, ‘I’m not done cleaning her up yet. There’s no way it’s even worth breeding her before she’s cleaned up. But it’s getting late enough in the year; I just hate to waste this heat cycle. Do you care if I just flush it out? That way I can flush it out and get her cleaned up,’ Miller said. “I said, ‘That’s a heck of an idea.’ So he flushed it one time, everything took, and he put it in a quarter horse mare.”

The mare stayed at Legacy Lane and foaled Amy Strong. Miller said that while her pedigree may be getting a bit dated based on today’s standards, the filly has always made an impression on those that visit the farm.

“We used a first-time mom. Everything went textbook. The mare was a super, super mom and had plenty of milk production. You couldn’t write it any better than how the process went,” he said. “I have a strong, strong consignment this year. This is a proven, Hall of Fame pedigree. She looks as sharp as the first ones did. The other ones will catch your eye on pedigree because they are up to date. She’s a little older, but this filly, out in the field you had people stop in and ask specifically, ‘What’s this one over here?’ Individually, she stands out and will just pace free-legged.”

Miller said that during his daughter’s battle with leukemia she served as an inspiration to others, and stood out by her actions. The filly that is now her namesake is also making an impression. Perhaps she will pay tribute to Amy with her exploits on the racetrack. Time will tell.

“There is something special about this filly, there really is,” Miller said. “I’m obviously biased toward her. What would be sweeter than this filly actually being something on the track?”