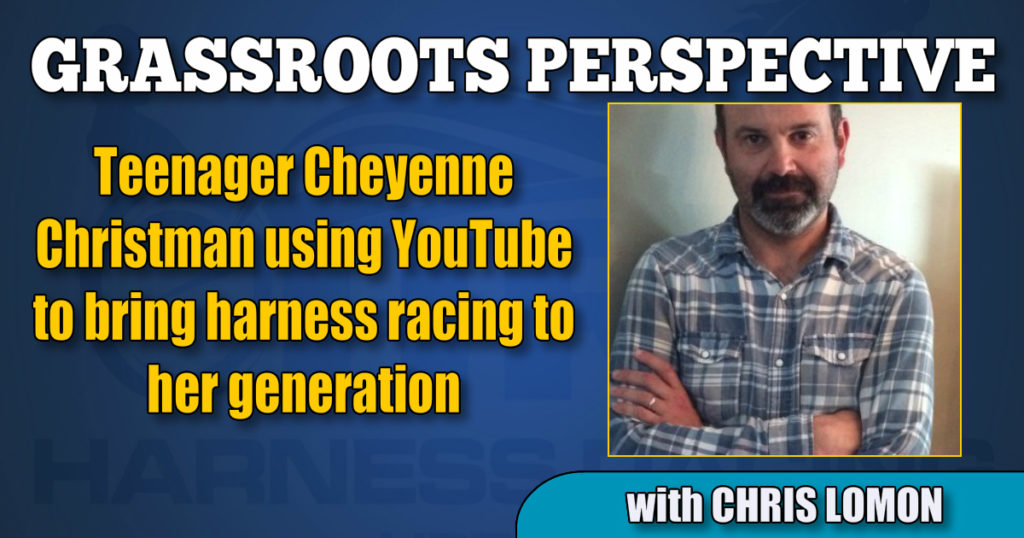 Cheyenne Christman is helping to heighten the popularity of harness racing one view at a time.

The videos the high school senior creates on YouTube (available here) are a combination of information, education, and entertainment, all presented in a clever, creative and professional package.

Although she never gave much thought to how many people would click ‘play’ or the amount of positive feedback she’d receive, Christman, a third generation horseperson, has come to know, in the best way possible, just how impactful her horse racing videos are.

“I started it for my own pure enjoyment,” said Christman, whose parents Mark and Joelene have combined for nearly 700 career training wins. “I also like it because it gives me the chance to update people on my life, to show my association with the horses, and what I love to do. It’s really surprising on some of the videos. Never in a million years would I have thought that people – I think one of the videos has over 3,000 views – would watch something like that. It’s just crazy. I still can’t believe it.”

In fact, her original plan called for creating one video.

As it turned out, more supply was needed to meet the demand.

“I was sitting here for so long not showing a part of my life that is so huge. I really wasn’t sure if people would find it interesting at all, whatsoever. I thought I’d make one video and see how it turned out. It got a decent amount of response, so I figured I’d keep going with it. It was so strange… I was talking to my one friend about horses and she started asking questions, wondering what certain things meant. It’s so interesting just how many people don’t know about harness racing, or understand the behind-the-scenes of it, what trainers, grooms and drivers go through on a daily basis.

“When I did my ‘Day at The Meadows’ video, that’s how I was inspired to make that one. My mom and I were paddocking a horse and I was texting my friend back and forth. She wanted to know what paddocking was and I started explaining the process and all the steps involved – what each horse needs, what some trainers or owners might want from you as the groom. So, that’s why I decided to make that video.”

The professionally shot videos cover a range of topics, from how to put on a race harness to what a typical race day looks like, with Christman serving as the host.

Having the platform to showcase her passion for racing, along with her love of acting, has been a true thrill ride for the teenager, the one who developed a bond with horses and horse racing at an early age.

“I get my love of harness racing through my parents. I was kind of just born into it. My mom got me my first pony, Patch, and I used to go barrel racing with him. So, from trail riding and barrel racing, I eventually gravitated towards standardbreds. These days, mainly, I’m a groom. My parents, I respect them and I love them – they are incredible people. So, for me, it’s all about me being lucky enough to learn from them. I do stalls, water buckets, and groom. I really love being at the racetrack or working with the horses.”

Christman, at least momentarily, can’t pinpoint the precise moment she fell in love with the sport.
Seconds later, she does.

“The exact moment was when I went to a standardbred horse show with my mom, and we took one of our standardbreds, Royal Revenue [a bay trotting son of Revenue S], with us. I was in sixth grade, and we ended up winning reserve champion with the horse. Basically, we trained the horse how to barrel race, how to ride English, and of course, working the cart, which was natural for him. I think that was the moment I fell in love with standardbred racing because it showed how versatile these horses are… how you can take them from their every day life, which is harness racing, and they can learn something else. It also shows they can have a good and happy life after racing.”

Bred by Randy and Michael Ringer, the trotting son of San Pellegrino is owned by Christman’s father.
In 235 career starts, the Pennsylvania-bred won 32 races and bankrolled $487,816.

“Hoopie is just wonderful. I still barrel race him and trail ride him. He’s a keeper, for sure. He’s done so much for the farm, and for my parents and I. He’s just a true blessing.”

It’s the exact term Christman uses to describe her association with standardbred racing, a mantra she repeats to herself during the challenging moments.

Advice from one of the sport’s top drivers, words she hears from him often, remind her to keep a positive outlook.

“Honestly, the rollercoaster of good times and bad is one of those things that you just come to accept. Aaron Merriman says it all the time… life’s a marathon not a sprint. He talks about focusing on what comes next and not dwelling on the past. Maybe the past race was tough, but you have to shake it off. My parents say that you have to stay at it, stay consistent. One quote my dad says all the time is, ‘It’s not what you do some of the time, it’s what you do all the time.’ You just have to keep believing something good will show up. Then at some point, you’re going to get the results, and it starts rolling from there.”

When she’s not lending a helping hand to her parents, Christman is hard at work on her YouTube videos [not all of them are horse racing themed] with an eye on something even bigger.

“I saw the trailer for the movie “Amazing Racer.” It’s a movie based on harness racing, but from what I gathered, not a lot of people were big fans of it. I saw the trailer, but I haven’t watched it all yet. What I thought looked really cool was the idea of making a movie and writing your own screenplay. You could hear what people’s opinions are about that first one, and build on that for the one that I would write. That’s something I’ve thought about. I love to sing and act, that’s my number one thing. So being able to combine harness racing and my love for acting would be incredible. I’m also running my own photography business. Really, I just love being creative in any way, shape or form.”

It’s something that continues to be noticed and noted, even when Christman least expects it.

“There’s a trainer, his name is Brandon Presto. I was just sitting in the paddock at The Meadows one day, doing my own thing. He comes up to me and tells me one of my videos popped up when he was watching races online. He said, ‘You’re actually really good at it.’ That was so cool that it connected with someone I knew from the racetrack, but had never really talked to that often.”

One of Christman’s biggest hopes, in relation to harness racing, is to see more people her age become involved in the sport.

She thinks about it often.

“I feel bad. I wish there could be marketing done to reach people my age. I know when I tell people my age what I do, they’ll say, ‘That’s so cool! I love horses.’ When I show them what I do, it opens a door for them, showing them that there are jobs in this sport if you are passionate about it.”

They have an ideal role model to look up to in Christman.

“I love putting my creativity into things and seeing where it takes me.”