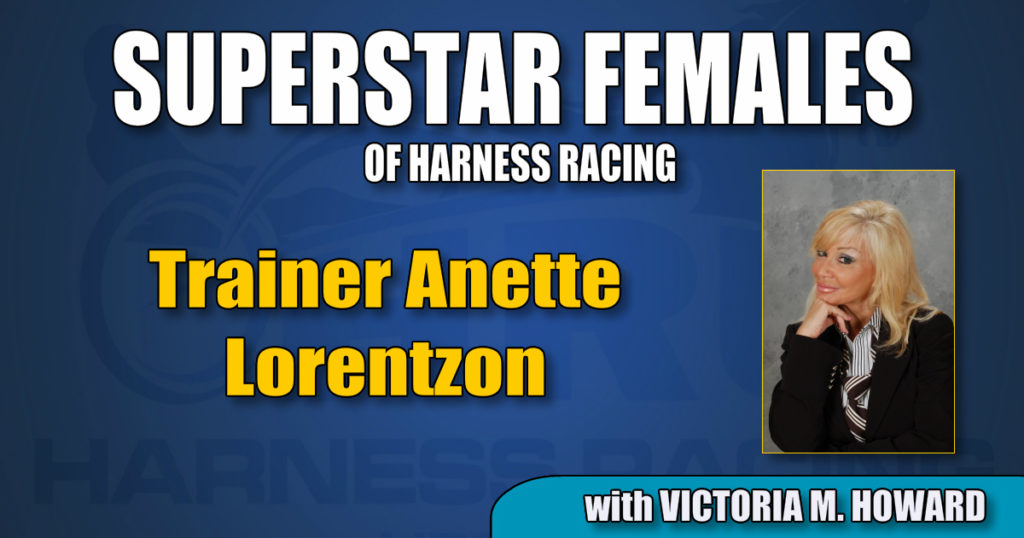 Born in Bladingeas, Kronobergs Lan, Sweden, Anette Lorentzon grew up on her parent’s farm. In 2003 when she was 20 years old, Lorentzon moved to the America to embark on a career in harness racing hoping to follow in the footsteps of renowned Swedish trainer Jimmy Takter.

After arriving in the United States, Lorentzon got a job working for trainer/driver Trond Smedshammer. Her plans were to learn more about training and racing 2 year-olds and then return home to Sweden.

“I guess you can say it all began for me when I was 11 years old,” she said. “My parents gave me a horse named Expensive AS and told me I could do what I wanted with him.

“Boy, I had a lot of fun with that horse. When I turned 16, my parents sent Expensive As and me to France for six months. Today, he is 29 years old and living out his life on our farm in Sweden. Although I love all the horses I own or train, Expensive As will always hold a special place in my heart.”

A career in harness racing can be very competitive and challenging, but that didn’t discourage Lorentzon. After all, she is no stranger to facing an arduous situation. Six years ago, she fought the toughest battle of her life when she was diagnosed with bone cancer and underwent femur replacement and chemotherapy.

“It was supposed to last for at least 15 years, but unfortunately two years ago I shattered the cement and had to have a new replacement.”

But being the positive and courageous woman she is, Lorentzon said, “Cancer may have started the fight, but I will end it.”

Thankfully, Lorentzon has now been cancer free for five years.

Lorentzon, 37, lives in Paris, KY and operates a 35-horse stable (including many 2-year-olds) that she shuffles between Magical Acres in New Jersey and the Red Mile in Lexington.

“Most of my horse are homebreds, but I try to find some horses I like at the sales every year. The babies are the most trying, but exciting, and they’re what keeps us horsemen going. That dream of having the next world champion.”

For the past five years, Lorentzon’s stock has captured many of the major races, but she acknowledges that it gets more difficult as the successes pile up.

“You’ve got to be lucky in the big races and hope the horses stay sound and healthy.”

One of her star pupils is a homebred 6-year-old male trotter named Guardian Angel As, who has now banked more than $1.5 million.

In 2019, he won the prestigious Maple Leaf Trot (equaling a Canadian record for the mile), Spirit of Massachusetts (a track record at Plainridge), Cleveland Trotting Classic (world record at Northfield) and Maxie Lee Memorial. Guardian Angel As was also second in the John Cashman Memorial and third in the TVG Series Championship and Caesars Trotting Classic.

In August 2020, Guardian Angel As was the upset winner in the $220,000 Crawford Farms Open Trot at Tioga, beating out Gimpanzee and Crystal Fashion.

“I’m so proud of Guardian Angel As for he has raced against some of the best out there and proved he can go with them. We always had high hopes for him and we took our time to bring him around slowly, and it paid off.”

Also in August a 2-year-old pacing filly trained and owned by Anette namedHeavenissofarawayequaled the track record in Urbana, OH. The daughter of Racing Hill crossed the wire first in 1:58.1, making it two-for-two in the Buckeye Stallion Series.

When her horses race at the Red Mile or in Ohio they are usually driven by boyfriend, Elliott Deaton. The pair has been a successful team — on and off the racetrack.

Lorentzon said she admires, “all trainers who work hard in the business — whether they have a large or small stable, or they are male or female, for it’s a tough business.

“But, most of all, I look up to my parents for what they have accomplished. They literally started out with one pony and built everything up from there.

“My sister, Anna, has been a great help to me with the New Jersey barn, and I’m very grateful to the people around me and my owners for I couldn’t do what I’m doing without them.”