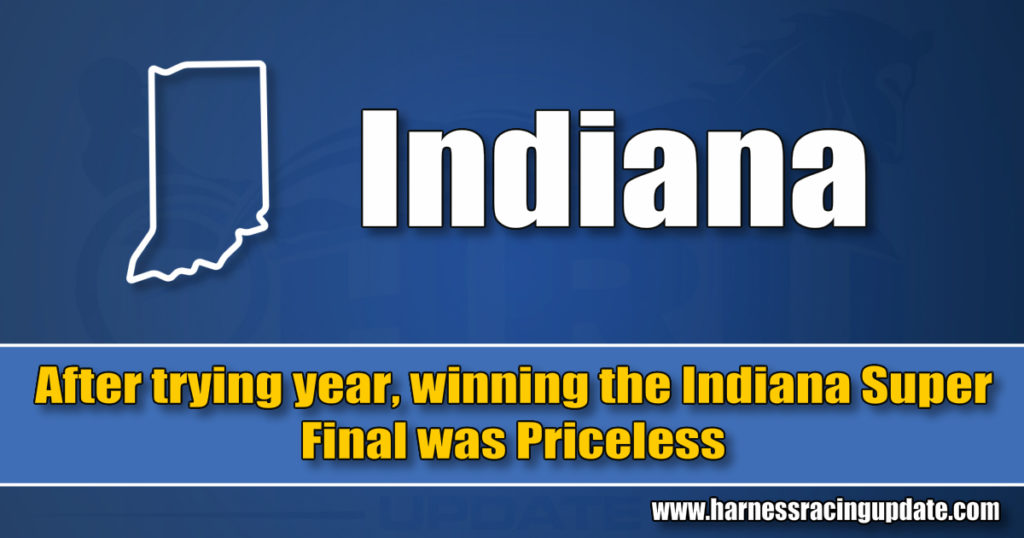 After a trying year, winning the Indiana Super Final was Priceless

Bert Hochsprung’s sophomore pacing filly is returning to form just in time for the Breeders Crown at her home track, Harrah’s Hoosier Park.

Owner Bert Hochsprung had high hopes this year for pacing filly Priceless, but the season has been marked mostly by one disappointment after another. A Breeders Crown elimination winner at 2, the Rockin Image sophomore salvaged an underwhelming campaign Friday night (Oct. 16) at Harrah’s Hoosier Park, winning the $270,000 Indiana Sires Stakes Super Final with a lifetime best 1:49.1 performance. It was only the second seasonal win for the pacer, and opens the door for another shot at the Breeders Crown, this year on the filly’s home track.

“It’s been kind of disappointing this year, no doubt,” said Hochsprung after the victory. “The year wasn’t going too well, but she raced awesome. She’s the filly we thought she was, you know? It’s pretty exciting.”

As a 2-year-old, Priceless captured seven of 11 starts, winning a trio of Indiana Sires Stakes legs and the $270,000 Super Final as well as a Kentuckiana Stallion Management stake. She earned her 1:50.2 freshman speed badge with a near five-length score over Reflect With Me in a Breeders Crown elimination in Canada last season. Priceless accumulated $347,162 in 2019 and looked to be a filly that could contend on the Grand Circuit in 2020.

Unfortunately, this season has proven a struggle, with a single win in 11 starts entering Friday night’s race. Despite a 1:52 triumph in her sophomore debut, Priceless hit the board only three more times. She raced second to Reflect With Me when the latter established a new Hoosier Park track record of 1:48.2 to capture the Nadia Lobell, but paced fourth in the Mistletoe Shalee. In the Fan Hanover final, she finished last after making an early break. At home in Indiana Sires Stakes action, she twice registered third-place efforts.

“She’s got some ankle problems, she’s got some issues,” said Hochsprung. “She’s got high speed, but we’re dealing with front ankles right now. Even now, she’s still not 100 per cent.”

After a trying campaign, Hochsprung and Miller decided Priceless needed a change of scenery, moving her to the barn of Andy and Julie Miller. Andy Miller explained that they received the pacer three weeks ago, and he sat behind the filly for the first time in competition Oct. 9, the last Indiana Sires Stakes leg leading into the Super Final. That night she finished fifth, and after seven rounds of competition, held the 10th and final points position to earn a spot in the Super Final.

“The week before she was okay and had pace, but she got locked in a hole and was on a line pretty good,” Miller said. “I couldn’t let her drift, so it kind of took the pace away from her in the lane.”

With that in mind, Miller made sure traffic would not be a problem Friday night, firing her to the lead from post eight. On the front, Priceless paced a :25.3 opening panel.

“We decided we wanted to cut it and that way I was able to let her drift a little in the lane, but she wasn’t on a line nearly as bad. I really didn’t want to follow anybody. I wanted to control the race,” he said.

The plan worked to perfection. Reaching the half in :54.1 and three quarters in 1:22.1, the filly, sent off as the fourth choice, closed out the mile with a :27 last quarter to win by a length and a quarter. While only her second seasonal win, the victory is the second Super Final score for Priceless and pushes her career earnings to nearly $550,000. More importantly, the victory shows Priceless can be competitive in a Breeders Crown division that also includes the flawless Party Girl Hill and Peaky Sneaky, a recent winner in Lexington.

“She’s got a few leg issues and some rigging issues. We’ve made a few changes on her and it worked well,” Miller said. “I think she’s as good as most of those fillies. I think this win kind of stamped her as a contender in there too. She’s one of the faster fillies this year I think.”

Hochsprung said the decision on whether to enter the Breeders Crown will come down to how Priceless comes out of the Super Final and how her ankles respond. With the possibility of four more starts on her dance card, the owner said his sophomore’s Super Final victory helped to erase many forgettable races this season.

“We’re just ecstatic. We forgot about the bad year now,” he said. “We’re kind of leaning toward it right now; we’re just waiting to see how she comes out of it Monday or Tuesday. Andy and Julie have done a phenomenal job with her, so she needs a little more TLC and I think we’ve got it. She put her best foot forward. Let’s hope we can get there next week. We’re going to try to give it our best effort.”