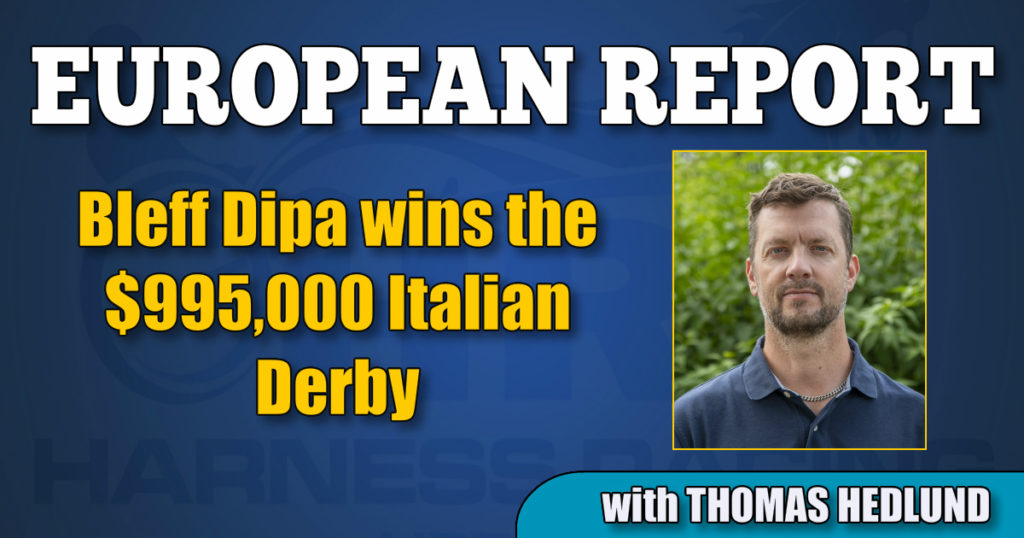 Fourteen 3-year-olds bred in Italy gathered around the track of Capannelle in Rome on Sunday afternoon (Oct. 11) and what looked like to be a Alessandro Gocciadoro show ended with a win for German-born trainer Holger Ehlert and his weapon Bleff Dipa (Mister J.P.).

Örjan Kihlström sent Gocciadoro-trained Bubble Effe to the front and the duo held that position almost all the way, but in a tight finish, Bubble Effe ended up as fourth.

Mister J.P. was a talented trotter in Björn Goop’s barn and he won nine consecutive starts from the debut and was first choice in the $850,000 Kriterium as a 3-year-old. He finished third in that race and lost for the first time in his career.

Barjon’s interest for the sport paid off great when Bleff Dipa captured the trophy in the Italian Derby and it was tight between the medalists. Both runner up Blackflash Bar and third placed Bepi Bi came home in 1:58.1.

Italian top driver Roberto Vecchione, known in America as winner of The International Trot at Yonkers 2019 with Zacon Gio, sat behind the winner.

Gocciadoro was lucky in the $297,000 Oaks del Trotto for fillies. Andrea Guzzinatti was entrusted behind Betta Zack (Rotary OK) and the duo hit the lead after the first quarter. When in front, Betta Zack was outstanding in a 1:56.4. mile.

Betta Zack has eight wins in ten attempts so far in her career.

The best 3-year-olds in Denmark battled over 1.6 miles at Charlottenlund racetrack in Copenhagen on Sunday afternoon (Oct. 11).

Champion driver Birger Jörgensen sent Morten Juul’s First Blood to the front and let first choice Fossa take over the lead after a quarter of a mile. When first over trotter Fetlock Joint got tired in the last turn, everything worked perfectly for First Blood, who easily sprinted to safe win in mile rate 2:01.4.

In the $60,000 Kriterium for mares, Fascination (Maharajah) claimed the trophy after a trip in front for driver Jeppe Juel. Norwegian Frode Hamre trains the younger sister to Ecurie D. who is, already now, as a 4-year-old, is one of the most interesting trotters there are in Europe.