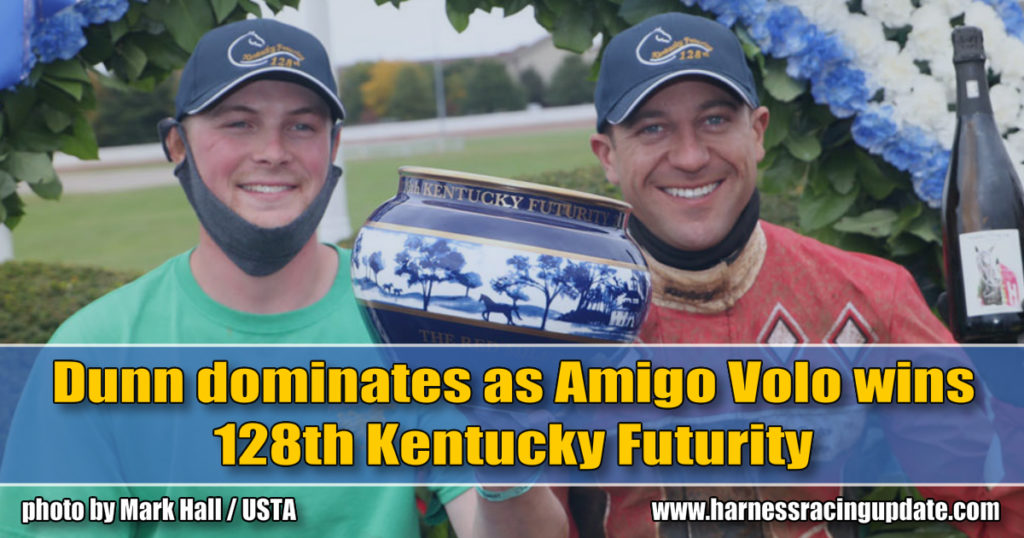 The Pinske Stables won both the Futurity and the Filly Futurity on Sunday at Red Mile, while driver Dexter Dunn won the Futurity, drove pacing filly Party Girl Hill to a win in the Tattersalls and won both the Allerage open and mare paces with Bettors Wish and Kissin In The Sand.

It was the day of days for Pinske Stables and driver Dexter Dunn at Lexington’s Red Mile on Sunday (Oct. 11). The Pinske Stable won both the 128th edition of the $440,000 Kentucky Futurity and the 55th edition of the $255,000 Kentucky Filly Futurity (see story pg 4) as co-owners of Amigo Volo and Love A Good Story, respectively. Dunn drove Amigo Volo to victory, kept 3-year-old pacing filly Party Girl Hill undefeated with a victory over the boys in her $239,500 Tattersalls division and won both the $150,000 Allerage open pace with Bettor’s Wish and the $72,000 Allerage mare pace with Kissin In The Sand (see story pg 8).

Carter Pinske said he was at a loss for words after 4-1 Amigo Volo, a gelded trotter his family owns with David J. Miller of Florida, won the Futurity in 1:51, finishing two lengths better than EL Ideal.

A year ago in Lexington, Amigo Volo was key to a coming out part for 25-year-old Pinske, winning twice at Red Mile, including a 1:52.3 world record.

“I remember last year here I said to myself, ‘Well, never going to have another day like that’ and now, to do this, it’s just incredible,” Pinske said. “It has put me right at a loss of words.”

The victory pushed Amigo Volo past $1 million in earnings. The Father Patrick—Margarita Momma gelding has won six races from 12 starts this season and 12 from 24 overall, banking $1,206,369.

“That’s the first millionaire I think we’ve had since Yankee Cruiser and that was in 2003,” Pinske said.

Richard “Nifty” Norman trains Amigo Volo, who was bred by Kentuckiana Farms LLC and Jorgen Jahre Jr. and sold for $42,000 at the 2018 Lexington Selected Yearling Sale.

Last week, Amigo Volo finished second to Back Of The Neck on Oct. 4 in their Bluegrass division at Red Mile.

“He was really good here last week — he was probably just a little bit short,” Dunn said of Amigo Volo. “Nifty knew he was going to be better today and he was. Last year he used to shake his head bad and it cost him a couple of times. He didn’t have as good of form when he came back as a 3-year-old — he was a bit average. We were probably looking after him a little too much — he just likes to race. You get off the gate hard, that’s when he gets excited and puts in good performances.”

Ready For Moni, the 2-1 second choice, lagged from his second-tier starting spot off the gate while Amigo Volo pushed for position to the inside. Beads, launching from post 10, swept to the lead before a :27 opening quarter while Amigo Volo settled into second with EL Ideal third and 4-5 favorite Back Of The Neck fourth.

Back Of The Neck made his move after the leader passing a :54.2 half and drew closer to the pacesetter into the final turn. Moving towards three-quarters in 1:22.3 Back Of The Neck broke stride, giving Amigo Volo room to tip out of the pocket straightening for the finish. Beads began to gallop while EL Ideal chased Amigo Volo through the stretch, settling for second. Third Shift ripped from the backfield to take third while Chestnut Hill weaved through traffic for fourth.

“I did attempt to go [for the lead],” Dunn said. “I came out for a little bit when we hit the back straight, but Beads was a little aggressive and took off so I ducked back into the two-hole there. Back Of The Neck came up outside of us around the last turn, and I was sort of 50-50 [on] whether I’d come out or stay in. And he ran, so that was probably a lucky trip in the last turn to get out, but the horse did a great job.”

Amigo Volo is now 6-1-2 in 12 starts in 2020, good for earnings of $593,823. He won his Pennsylvania Sires Stakes Championship and was fourth in both the Hambletonian and the Stanley Dancer.

“He’s been excellent this year,” Pinske said. “He may have started just a little soft and I blame that mostly on COVID-19. He had an extra month of training and the horse has kind of showed his whole life that he’s not really a fan of training. He loves to race. When we were in the Hambo that’s the best he’s been and that was his seventh start in seven weeks. This year and last year he was like that.”