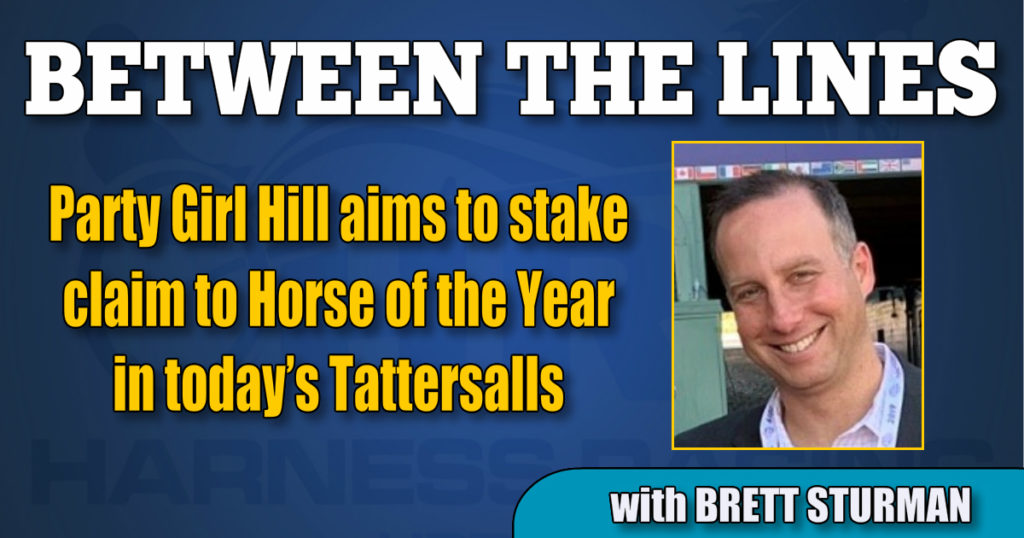 In bold move by her connections, the undefeated pacing filly is taking on the boys in today’s Tattersalls at the Red Mile in an attempt to claim the title as the continent’s top horse.

In an uncharacteristic but bold decision, 3-year-old pacing filly Party Girl Hill will be racing this afternoon (Oct. 11) in a division of the $239,500 Tattersalls at the Red Mile against colts. While the female-versus-male scenario has become somewhat commonplace on the trotting side, it’s far rarer for pacers.

Owned and bred by Tom Hill from the United Kingdom and trained by New Zealand native Chris Ryder, Party Girl Hill has made a massive impression since her career debut just four months ago. Coming off recent major stake final wins including the Fan Hanover, PA sire stakes, and the Jugette, she established a new career mark of 1:48 last week when cruising in her division of the Bluegrass for fillies. Unblemished and untouched, her career mark stands at a perfect 12-for-12.

Party Girl Hill currently sits at #3 in the Hambletonian/Breeders Crown Society Top 10 weekly poll. Ahead of her are only Ramona Hill (1) and Tall Dark Stranger (2). Party Girl Hill has 10 first place votes (three more than Tall Dark Stranger) and a win today in the Tattersalls seems like it would go a long way in top spot consideration not only in the weekly poll, but for eventual Horse of the Year honors.

Describing what went into the decision to race Party Girl Hill in the 3-year-old Open Tattersalls Pace, trainer Ryder said, “We put a lot of thought into it and obviously to race against the colts you’ve got to have a lot of confidence. It creates a little pizzazz and something a little bit different and is a chance for her to stamp herself as the number one horse in harness racing. We kind of thought if we didn’t take this week, we wouldn’t have had any other chance for the rest of the year. Being a mile track we wanted her to take on the best and have a chance to beat them. Between the owners, myself, and Dexter (Dunn), we really were all on the same page, so it wasn’t really a controversial decision; we were quite happy to try it.”

For Ryder, taking this kind of a shot with a top Horse of Year contender isn’t unprecedented. It was just last November when Ryder’s Bettor’s Wish as a 3-year-old took on older pacing horses in the TVG final. Having not finished worse than second all last year, including being runner-up in the TVG, a win in that race might have been enough for him to have overtaken Shartin N for the sport’s top spot last year.
Ryder remains as confident as ever heading into her clash against some of the better sophomore colts.

“I think her chances are great,” said Ryder. “They’re just as good as any race she’s been in here, but we’re disappointed that Tall Dark Stranger (who drew into the other Tattersalls division) wasn’t in there. That was really the main reason. We were looking forward to racing him and unfortunately didn’t get in with him. But she’s still in with a good batch.”

Ryder said the reason Party Girl Hill didn’t make her first career start until her 3-year-old season was because, “as a 2-year-old she was ready to qualify and she got a hairline fracture in her P1 bone in the hind leg and she had to be shut down for the year. But they were very happy with her last year. She had always felt like a top-of-the-line filly. You never know how good, but we always thought she was very good.”

Going as race 4, Party Girl Hill has landed the inside starting slot and her two chief rivals will come from the posts right next to her. No Lou Zing starts from post 2 and there’s no question that Nancy Takter has gotten this one figured out. After a tripped-out win two back in the PA sires final, he zipped right down the road in a stake at Hoosier for a new career mark of 1:49.2. Gingras gets the drive on No Lou Zing, with Dunn on Party Girl Hill. Capt Midnight has shown up for almost every major race this year. He yielded to a longshot last week in the Bluegrass before coming back to pass that one but was outsprinted through the lane by Warraee Vital. Sandbetweenmytoes was hard used in that Jug final in his second race that day and that didn’t have any real punch last week, though I suppose that could be somewhat forgiven considering the 1:46.4 time of that race. I do think Party Girl Hill will be tested in here either from one of the main contenders or an outsider and still may come out victorious, but in any case the connections deserve praise for taking a chance you don’t see too often.

The “other” Tattersalls division is two races prior in race 2, and this race came up loaded. Fellow Horse of Year contender Tall Dark Stranger headlines the race off his traditional narrow margin win last week here. Now 9-for-10 on the year and 17-of-19 for the career, all he does is win. His time wasn’t nearly as fast last week as Cattlewash, who tied the all-time 1:46.4 record for a 3-year-olds last week. It’ll be fascinating to see how he follows it against the likes of Tall Dark Stranger. Cattlewash was deceptively good in the Little Brown Jug final won by Captain Barbossa and parlayed a dream last week to that record mile. Warrawee Vital looked buried fourth on the rail last week into the stretch but flew once the inside opened. Following up on the inexplicable no-show in the Jug, he responded well last out to first-time Lasix. Captain Kirk blazed the way last out setting up that record mile and did well to hold for second; I’ll reluctantly pass on Catch The Fire and Fortify.

In the Kentucky Filly Futurity, Ramona Hill is the third piece of the current Horse of the Year picture and looks to rebound off a shocking loss. In her Bluegrass race last week, she seemed well-rated through three-quarters to 1:24.2, but had little resistance in the end to fend off longshot Ab’s Attitudeexpress. She will need to bring her best today to beat this highly-competitive bunch. Next Level Stuff keeps Tetrick over last week’s upset winner Ab’s Attitudeexpress. Love A Good Story was flying late on the outside last out for Team Miller. It’s unfortunate she broke two back in that NYSS final as she was highly regarded earlier in the summer. Sorella was game through the stretch last out to hold off Hypnotic Am who couldn’t pass her despite the trip; a longshot was almost able to capitalize off that stretch duel to miss by an inch. Panem tired despite a favorable trip and now has an outside post; is somehow just 1 for 10 on the year. Burke trainee’s Sister Sledge and Crucial need to go a step quicker.

I’ll go with Back Of The Neck in the $444,000 Kentucky Futurity. He raced last week for the first time since August, and set a new lifetime mark of 1:51.3. He did also with ease, coming home in :25.4 and looked flawless once Zeron had clearance for him midway through the stretch. He’s been even money his last two races but wasn’t favored in either of those; don’t see that often. Ready For Moni makes his first start since the Canadian Trotting Classic three weeks ago. He made an uncharacteristic break in that race when a couple lengths clear; very hard to tell, though, if the others were closing at the time of the break and he’ll have to overcome the second-tier start. Chestnut Hill benefitted in that CTC race when he sprung the 60-1 shocker and then got a rather conservative try last out. He did look to be picking up steam though in that race when he broke. King Alphonso was gaining late last out and just missed second to EL Ideal; gets a big driver change to Tetrick. Beads had been awesome in all starts prior to last week and then just didn’t have it in his most recent at 1-5. Amigo Volo may try to take them all the way.