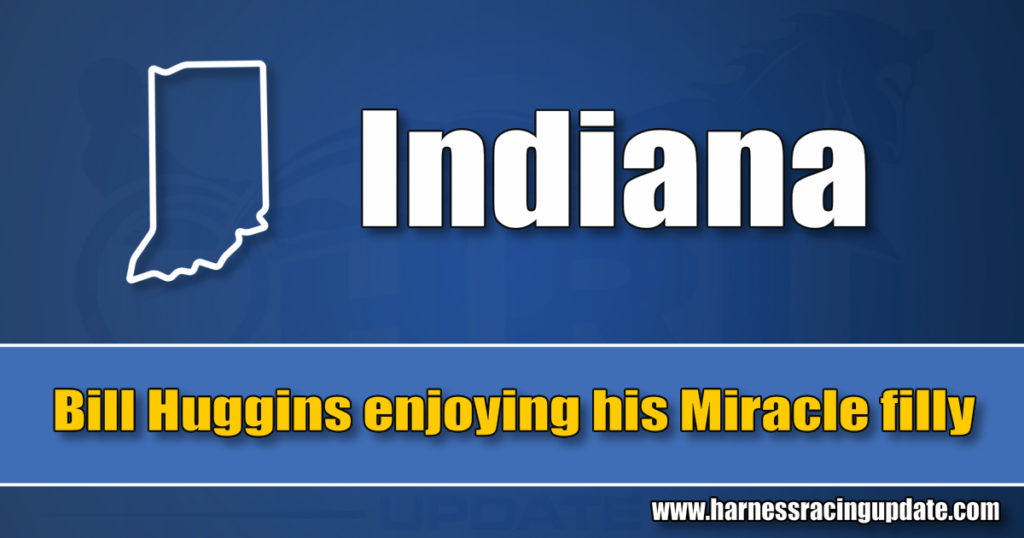 Though tied for the fourth most 2-year-old wins in North America, 10-time winner Always A Miracle may need divine intervention to qualify for next Friday’s $250,000 Indiana Sires Stakes Super Final.

One of the most consistent freshmen in the state of Indiana is a filly you may not know. Always A Miracle did not spend her summer at Harrah’s Hoosier Park, but she is one of North America’s leaders with a double-digit win total after a successful fair season. Recently, she added an Indiana Sires Stakes triumph to her credit, winning Wednesday (Oct. 7) in a time of 1:53.2. Unfortunately, she stands to miss out on competing in the Indiana Super Final in less than a week.

“We raced her at the fairs quite a bit and had seven wins in nine starts and two seconds,” said owner and co-breeder Bill Huggins. “One of the seconds was by about six inches. I’m really happy with her.”

Huggins has a long history with the family, first owning Always A Miracle’s dam, Iva Miracle. He owned Iva Miracle’s full sister, Valley Electric, also a product of the cross of Electric Yankee and Incredible Finale mare Fox Valley Godiva. Valley Electric earned just over $780,000 while accumulating 42 wins in the Hoosier State, with key victories in Indiana Sires Stakes (ISS) competition. Iva Miracle never produced the results of her older sibling. She collected a victory on the Indiana fair circuit as a freshman, and finished third in a sires stakes final, but an injury abruptly ended her career.

“She raced in a sires stakes at Shelbyville (Indiana Downs) when they were still racing down there and I think she finished third,” Huggins recalled. “After that, she broke a P1 bone in her back ankle and I took her down to Rood and Riddle and they put screws in it, but she never came back. So we made a broodmare out of her. She’s not a very big mare, but she has produced.”

From 10 foals of racing age, Iva Miracle has produced nine winners, led by Always A Miracle’s full sister, It’s A Miracle. The Always A Virgin mare earned $471,627, picking up 38 wins and taking a mark of 1:51. Panda Man, a gelded son of The Panderosa, is the only other six-figure earner from Iva Miracle.

“Nine winners out of 10, which is pretty damn good,” Huggins said. “I know a couple of them weren’t much. I kept several of them, but we sold several of them too.”

Always A Miracle was entrusted to Matt Rheinheimer, and the trainer also handled the driving duties this summer on the fair circuit. After qualifying in late June at Hoosier Park, Rheinheimer and the freshman kicked off the season with a victory at Converse, winning by nearly three lengths. Over the next eight trips behind the starting gate, Always A Miracle registered six victories and finished second in the $20,000 Governor’s Cup championship at the Indiana State Fairgrounds.

Moving to Hoosier Park following the fair season, the filly picked up the services of leading driver Trace Tetrick in her first pari-mutuel attempts, winning both. She stepped up into Indiana’s top program and teamed with Ricky Macomber Jr. to produce a lifetime best effort. In her $40,500 ISS division, the lass won by a length and a half as the third choice, adding her 10th win in 12 seasonal starts while finishing no worse than second. Always A Miracle’s seasonal earnings now stand at $46,700.

Huggins, now 84, is not able to see his filly race in person, but watches her Hoosier Park starts on RTN. Health issues keep him from the track, but he is savoring every win.

“I’m getting to be an old man. I haven’t been to the track in four years. My legs and my eyes are so bad, I can’t drive anymore,” he said. “It’s really been amazing to have one that’s doing well. I’ve enjoyed it.”

Despite only making one start in sires stakes, the filly is three points shy of the top 10 leading into the Super Final, slated for Friday (Oct. 16). Always A Miracle could draw into the lucrative $250,000 event should a filly listed higher in the points opts not to drop in the box.

Huggins may need a miracle, but should his filly draw in, she would contend with the ultra-tough division leader Somethingbeautiful and other talented fillies. Worst-case scenario is that she will compete in the $25,000 consolation, and for Huggins, that’s not bad news in a season that has proven a pleasant surprise.