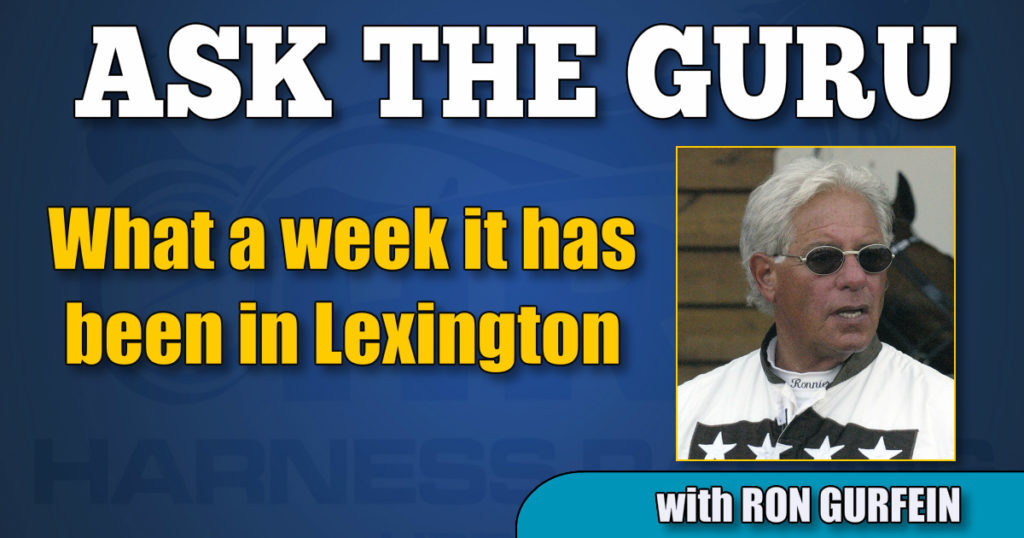 What a week it has been  in Lexington

All things considered, the sale has been terrific with the best racing starting today at the Red Mile through Sunday’s Kentucky Futurity Day.

Tidbits: What a week this has been. I really needed 48-hour days. The opening night session of the Lexington Selected Sale was nothing short of amazing considering the existing conditions. The mood was upbeat and there was a much larger crowd than I expected. The second night was another story. I left the sale early in the evening, but I did notice a much smaller group in attendance. I thought the second night yielded many bargains that were not to be had on opening day.

All negatives should be put aside. We can all be thankful that all things considered the sale was an amazing success. The turn out to this writer was more than amazing and when you think about the decisions management made in the process, what turned out to be a nice event could easily been a disaster. At one point, they were not sure whether or not we would even have a sale.

I was thankful and kind of surprised to see the amount of Canadians and Europeans in attendance considering what it takes to cross borders and return at this time in COVID-19 history.

I have been doing the sale thing for almost 60 years and last year’s Lexington sale was by far the best sale I have ever attended. In fact, the only one that compares in my impaired memory was the Tattersalls when Abercrombie had his initial crop go to market. That said, I think it’s unfortunate to attempt to make any numbers comparison between this year and last year. When comparing figures with other recent sales the numbers appear down 4% which is more realistic to me.

I am writing this column on Thursday as it’s my deadline, but I will prognosticate that Thursday’s 4th session will be lower still and Friday with the stacking of Indiana and Ohio breds will be a jump back up again.

My first endeavor at predicting top yearlings was on the money night one. I fell flat on my face on night two, and was revived with a minor comeback in day three. However, I will point out that my top five numbers on Tuesday were all purchased by some of the finest trainers in the business — Steve Elliott bought my top choice and the remaining four were bought by Chris Ryder, Ake Svanstedt and two by Nancy Takter. Let’s take a closer look a year from now to determine who was on the money.

I will suggest, with no afternoon racing, selling 180 horses a night would work far better with an earlier beginning to the sessions.

Back to the tedious undertaking of the top ten daily selections.

My yearling selection and appraisals are a business to me and I spend a lot of time in the process and take the responsibility maybe too seriously. When my editor suggested The Top 10 list I went along not realizing how conflicted my mind would be on horses that I thought should be top sellers and horses that would actually be best sellers. My mistake was I listed too many of what I thought were the best, not taking into consideration that the big money European and Canadian buyers had a taste in horses often different from mine.

Another major mistake I made was not considering the amazing popularity of American Ideal. A marginal one out sells a marginal Muscle Hill. Another surprise is the falling from grace of Father Patrick — sire of the fastest horse I ever saw in Greenshoe — in such a short time. It reminds me of Baltic Speed back 10 years before the turn of the century.

An interesting example of what a bad night I had Tuesday. I loved a filly and a colt at Concord Farm on my visit there in early September. Monkey Queen, the sister to Gimpanzee and a Cantab Hall colt with far less pedigree. Lindy Farms bought the filly, but didn’t bid on the colt. Although they liked his pedigree, they felt he didn’t fit their program through no fault of his own.

If I have heard it once I have heard it 100 times. I was talking to a young trainer today who previously told me how much he liked a particular colt. I inquired how he could pass on him at a price I deemed one third of his value.

“I was afraid to bid because he was selling so cheaply,” was his reply.

I will say it one more time, going to a sale unprepared is like going to a sword fight without a sword. If you do your homework there is never a moment when you are unsure about raising your hand.

Sunshine Meadows has bagel Saturday morning on The Deck so in his infinite wisdom the world renown Nick Salvi decided on Bagel Thursday on The Porch at the Red Mile. The end result was and I quote, “All these Kentucky boys are telling me, ‘Thems the worst doughnuts I ever had.’”

I got a lot of negative feedback on my trashing of the Florida governor (full story here). I reiterate it had nothing to do with politics as all the emails stated.

Just pause a moment and reflect what is going on in the entire country. Places that are obeying the CDC guidelines have little virus problems compared to the Alpha male areas that refuse to wear masks and social distance.

The bottom line is the restaurant owners themselves have erred on the side of reason and refused to open to 100 per cent capacity.

Here are some examples of what I got in the mail. I will omit the authors’ name to avoid unnecessary problems:

“Stay out of medicine and stick to racing. DeSantis is doing great work, fresh air is the best antidote for the disease the Chinese sent us and we need to open up the tracks to spectators.”

“Stop being a hysteric and let people get back to work and their normal lives. If you are afraid of the virus stay home or walk out with a mask looking like a moron.”

This is what we are up against.

Mike Lewis asks: What is the name of the Italian restaurant your friend opened in Lexington ? My wife and I would like to go next week.

Unfortunately my friend Carlo Vaccarezzas’ new place Frank and Dino’s will not be open until the end of the year. The health situation has moved the opening forward about six months. I will tell you it is worth waiting for and my guess is it will be a hot spot in Lexington for years to come.

I will suggest Le Deauville and Jeff Ruby’s as fine choices for dining. Both have ample outdoor seating if that is your desire. If you like French food, Deauville has been running specials in Beef Bourguignon and Coq au Vin. I am a Sushi lover and am addicted to Jeff Ruby’s Callipari Roll. Their steak is amazing, as well.

Matt Wilford asks: I have been a fan for years. I have finally reached a point that I am thinking about buying a horse or two. What advice do you have for someone that wants to become a horse owner? How do I find a good trainer?

There are many good trainers out there. Some will provide you with fun, some with a severe head ache. COMMUNICATION is the key to any owner/ trainer relationship.

The first step is to ask your friends that own horses about their trainer. Have they had some financial success? Is the trainer easy to speak with? Does he or she keep them informed of the horse’s condition and up-coming races?

This is not an easy task and you should invest some serious time in the decision.

My suggestion is to start with one horse and buy a horse that is racing. Instant gratification is great to start out. The yearling game is wonderful, but one needs plenty of money and lots of patience. All forms of horse ownership are wonderful keep your expectations low and dreams high and you will love the ride.

Tom Santoro asks: What happens if some of the indicted trainers are found to be totally innocent. Can they sue Jeff Gural?

To begin with last time I looked I didn’t have a law degree. That said, I expect that out of 30 there will be some that may be found not guilty but I cannot imagine in my wildest dreams what kind of grounds they would have to sue Jeff.

All he did was hire a firm to protect the integrity of his product. He never accused anyone of anything. The FBI through wiretaps and thorough investigation precipitated the handing down of indictments. Let the chips fall where they may, there will be no lawsuits against Jeff or the Meadowlands.

Alexander Bishop asks: Do you think Ramona Hill will beat the boys again in the Kentucky Futurity?

I spoke to Tony Alagna last night at the sale and he said that since she scoped poorly her last start he was leaning into venturing into the filly division instead. To this writer, on a given day that division could be as tough. It’s getting late in the season and for 2020 the year that a virus caused the start of stakes racing to be moved up about six weeks one wouldn’t think there would be as may banged up tired horses as there are. However, fast miles and the fast training methods of the day have taken their toll.

Ramona Hill will be odds on in the filly division, but if she is not nearly 100 per cent recovered from her sickness there are a few speedy ladies out there that can upset her.

As for the colts, there are 14 entered and by virtue of earnings only 12 will race with two also eligibles. To me it becomes a two-horse battle. Ready For Moni comes of a sore performance in Canada where he made a break and Back of the Neck comes off an impressive win in the Bluegrass.

Nancy Takter told me that she trained Ready For Moni a half in :54 and said with a smile, “I think he is ready.”

If both come with there A game there is no question that Ready For Moni is the faster of the two colts. There are others in there that have flashes but don’t compare in class to the aforementioned pair.

Sunday at the Red Mile is Futurity Day and as “The Voice” would say “Be there.”

Thanks to all of you that bothered to walk over and complement my column at the sale. It is very much appreciated. Without question, your positive input give me the impetus to go on. Don’t miss the Futurity as well as a wonderful weekend of huge Red Mile Stakes. Have a wonderful week.