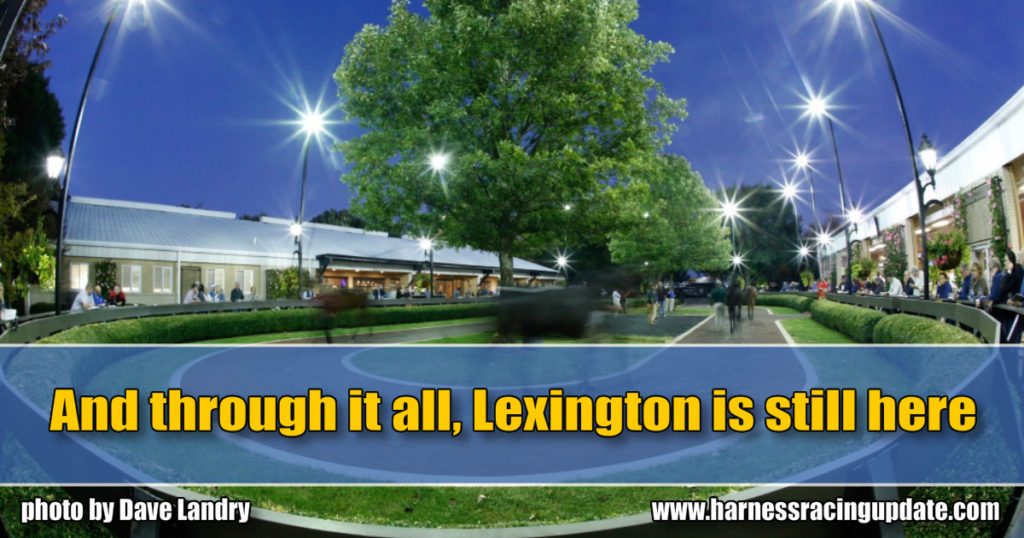 And through it all, Lexington is still here

When the COVID-19 pandemic started, there were doubts whether the sale would go ahead. Flash forward seven months and Rob Tribbett from All American, Mark Egloff of Vieux Carre Farms and Bob Boni of Northwood Bloodstock believe the industry will be as resilient as always.

Lexington will be ready.

That’s the consensus of many already on the grounds at the Fasig-Tipton Sales Pavilion in an area not buzzing with the same energy as it would a non-pandemic year.

COVID-19 caused racing to shut down in March and little foresight existed at that point to even conjure if events such as the Lexington Sale would occur.

“We’re used to dealing with issues,” said Rob Tribbett, general manager of All American Harnessbreds. “As breeders, there’s always obstacles so we just have to keep going to the next day, to the next day, but I’m glad we have an opportunity to be here.”

Dave Landry | The outside walking ring.

Mark Egloff of Vieux Carre Farms also was not discouraged by the sudden shift in the world. “You have to be an optimist to be in this business in the first place,” he said. “March was way too early for us to get too crazy with thinking that we’re going to have to do things a totally different way. In March we were still optimistic that the sale would happen and as of right now it looks like we were right.”

Northwood Bloodstock’s Bob Boni worried earlier in the year that the Lexington Sale would fail. But “as time has gone on I think people have [made] adjustments,” he said. “They’ve kind of figured out what to do. And those that want to buy horses they’ll find them… the right money always finds the right horses.

Coming into October, the world enters the seventh month of the pandemic. Though, since the first wave, several facets of North American life have met at the corner of new and normal. Lexington will allow buyers on the ground so long as they abide by standard social-distancing protocol. But this year, many are also given the option to participate remotely with low-latency, no-lag bidding, which will be the ideal option for those unable to make the trek to the Bluegrass.

However the electricity to Lexington has always in part come from the commingling of Grand Circuit racing with high-quality yearlings. Egloff, like many, feels it’s a tough energy to replicate.

“There’s no substituting the excitement of a live auction when everybody’s there, and they’ve been to the races that day and got excited the stakes winners — [their] brothers and sisters… it feeds on itself. But hopefully its good enough. It’s a year for creativity and people trying to do things a different way. And some businesses are more easily adaptable to that sort of thing than others. I think high-end horse sales — that personal touch and inspection is still going to be a pretty important part of it.”

Along with the increased inclusion of virtual attendees, many consignors have placed focus on their digital platforms. Yearling videos are made available on the Lexington Selected Sale’s website along with confirmation videos for those unable to visit the horses in person.

“Nothing beats the environment of having people in the same room in an electric environment,” said Tribbett. “But the buyers that buy at the higher levels — they’re sophisticated people and have really good teams in place that they’re going to get the information they need. And they know how to value a horse.”

Tribbett noted the high interest in yearlings from the first crop of world champion Walner, of which his consignment features two. All American also will have yearlings selling on the fifth day — a peculiarity for Tribbett — with Ohio-bred progeny from the first crops of Fear The Dragon and Downbytheseaside.

“I think those stallions [are] as good as any stallion; they could stand anywhere in the country and they stand in Ohio. And I think that’s really exciting for not just Ohio buyers but for Grand Circuit buyers, so that they can buy a horse that has eligibility in that state. But those horses can really go in the Metro or in the Meadowlands Pace.”

In the first day of the sale, Tribbett will send to the ring the colt he likes the most: a Cantab Hall brother to world champion JL Cruze named Top Rank (Hip 61).

“JL Cruze is as tough of a horse as we’ve seen in a long time. And this guy is, to me, a picture of what a horse should be,” Tribbett said. “I’m very excited to sell him with his breeding and what he looks like.”

Vieux Carre has a lot of “nice pacing colts”

Egloff, who last year sold the Somebeacahsomewhere – Economy Terror colt One Eight Hundred for $800,000, has another colt from the broodmare by world champion Sweet Lou leading a lot of “nice pacing colts” for Vieux Carre Farms.

“The other categories I pretty much know who the nicest one is there,” said Egloff, whose consignment is selling 20 yearlings through the five sessions. “Trotting colts it’d be [Hip] 49 — a Muscle Hill colt out of Viva Las Lindy who’s exceptional. Pacing fillies — I’ve got a real nice Captaintreacherous filly, [Hip] 79, who’s exceptional. As far as the trotting fillies… I’ll tell you, I’ve got a beautiful Donato Hanover filly selling later in the sale, [Hip] 610. She’s probably my favorite as far as an individual in our consignment. That’s later in the sale… we’ll see how she does.”

Northwood Bloodstock will send 21 yearlings through the sale. Fronting the consignment is Maximus Miki (Hip 70) — a full-brother to Always A Miki.

“We sold Always A Miki last year — he brought $40,000 — and he was a very nice colt,” Boni said. “The knock on him if there was [one]: he was small. This one here is almost an identical individual but you’d call him a big colt. The fact that he’s the same type of horse but just bigger and stronger… he’s pretty impressive. Knowing what I know about the brother from last year, he’s just the same version… but we just went from a point guard to a power forward; from a half back to a tight end.”

“She’s a lovely filly. Very correct, very likeable filly, and I’ve been impressed with the Southwind Franks. He’s got a very small first crop, and we’ve seen three sons of Muscle Hill: him, Bar Hopping and Trixton — they’ve all shown they can get the job done.”

Northwood also features two yearlings from the first crop of Huntsville, among them Up The Hand (Hip 196)—the first foal out of the American Ideal mare Upper Hand.

“He’s a very handsome horse; good sized horse — up off the ground, good head and eye,” Boni said. “This is the first Huntsville I’ve had a chance to take a look at as a yearling and he’s a good colt.”