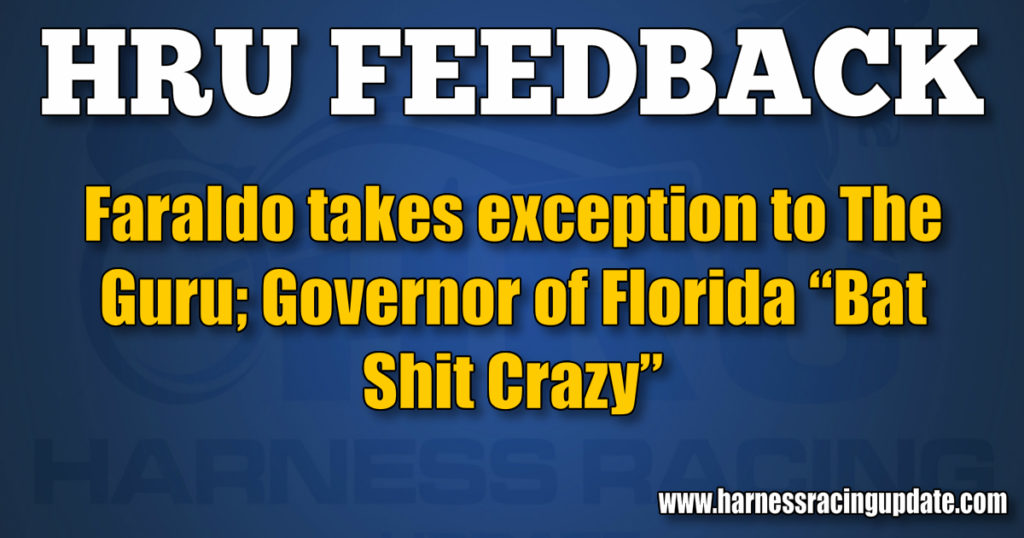 Faraldo takes exception to The Guru

I have been a fan of The Trotting Guru ever since I first knew him at Monticello during his pre Guru years. I have a lot of respect for him but with this statement, from his Thursday column (full story here) I take exception:

Now as I write this, the SOA of New York has joined the march against the bill. Their objections are ridiculous. We won’t have to pay $50 a start, we will have to sit down and make different ground rules for our sport, but everyone is taking the situation at face value instead of discussing compromise.

I do not know who “the everyone is” that is wrongly taking the situation at face value. It is there in black and white in the proposed legislation and there is meaning to the words.

On the factual side, the USTA has logged over three years of meetings and “sit downs” lobbying for the “ground rules” that suit our sport. In addition, 100 hours have been put in “discussing compromise” and the calculation of the initial “nearly $50 per start,” added to the $19.90 currently in place in NYS, which is based upon a study done by the USTA on the per start default assessment in the Act.

I have heard much criticism of the USTA’s work but not one concrete suggestion about what should be in the bill from anyone. The USTA on the other hand has advocated for the different treatment for our breed, medication rules that suit the ethical treatment of our horses by honest and competent harness veterinarians, self-funding by our industry for spending and much more needed policing within our industry, and for the continuation of the use of the therapeutic medication Lasix as an aid to combating EIPH.

Uniform rules that apply to our performance model , are achievable, and we continue to advocate for that for our sport . A need which is significantly different from the thoroughbred elite who sculpted this bill and have refused any compromise not suiting their agenda.

I am going to take Ron Gurfein’s attack on the Governor of Florida (full story here) on his word that his venomous attack on Governor DeSantis of Florida is not politically motivated. I will also acknowledge that Ron is not alone in his fear of opening the state too soon. However, many of us believe that we would love to be in a state where we are not prisoners. Some of us would love to be in a state where freedom supersedes fear. I believe that was the principle of the dangerous westward move of this nation, the exploration of space and sitting in a sulky behind some crazy horse in a crowded field of horses — among other myriad examples. We would love to live in a state where businesses are not disappearing and jobs are not being killed; divorce rates are not off the charts and suicides are not climbing exponentially faster than the death rate from the virus. We acknowledge the risk of the virus. It is real. People have died.

But many of us humans prefer not to live like vegetables. This is my opinion.