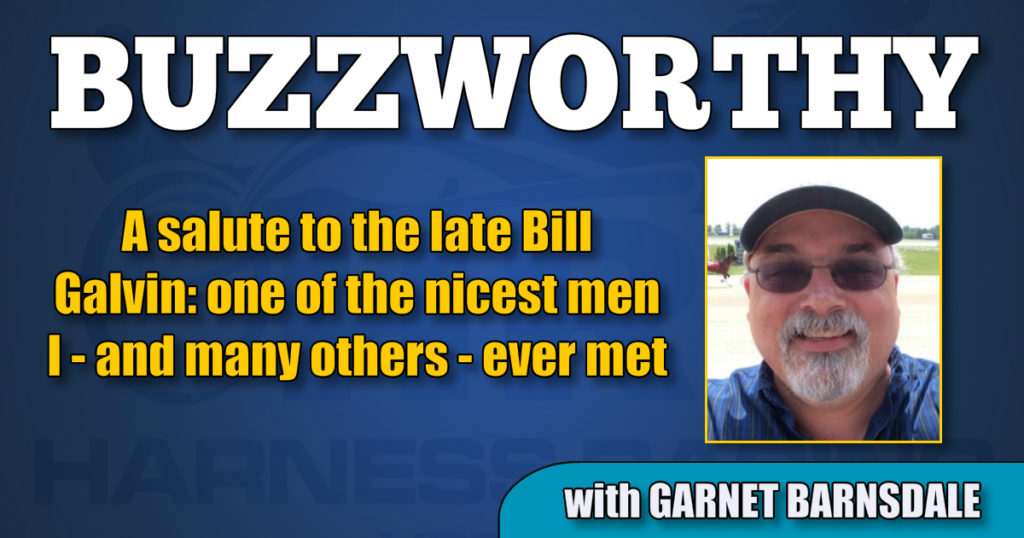 A salute to the late Bill Galvin: one of the nicest men I – and many others – ever met

That wasn’t a message I was expecting to read when my phone buzzed last Saturday, and I saw that one of my colleagues in the harness writers fraternity contacting me. It froze me. It can’t be, I thought. I just spoke to him at Grand River Raceway just a couple of weeks ago. That night, as always, Bill was cheerful and in good spirits and happy that his 3-year-old pacing filly Shes A Sassy Beach had finished a game third in an Ontario Sires Stakes Gold race.

It just can’t be, I kept thinking. Bill was healthy. But it was true, and it didn’t take long for social media to start buzzing with tributes to a Canadian Horse Racing Hall of Famer whose energy and passion for promoting harness racing belied his 89 years. Melissa Keith, the colleague that informed me of Bill’s passing, worked closely with him on several projects and remembered his tireless efforts to promote the sport he loved.

Anything that helped advance the sport and animals he loved was fair game for Bill, who said in an e-mail a couple of weeks back how happy he was to see Nathan Bain and Nick Barnsdale competing in a public handicapping contest at Leamington Raceway. He also praised the #MiamiMadness promotion that saw Manitoba fair track announcer Trey Colbeck and friends get pari-mutuel support rolling for a record-breaking closing day 2020 handle. Bill was proud of his filly, Shes a Sassy Beach, but he found winners everywhere. And why not? He set the bar high, for the rest of us.

Galvin was very close to Woodbine Mohawk Park Announcer Ken Middleton, who bred and co-owned Shes A Sassy Beach with him. Middleton posted this tribute to his friend on Facebook:

I lost one of my best friends today. Thanks to everyone for the calls, the texts, the emails and the messages. They are greatly appreciated. It’s been a tough day, especially since I just saw him a few days ago and spoke on the phone with him yesterday. Anyone that had the pleasure of meeting Bill Galvin during their travels generally had the same thing to say about him. He was funny, charming, polite, hard-working, sincere, respectful, dedicated, intelligent, generous and he had an incredible passion for harness racing. Bill was one of my dad’s best friends, and over the course of the last decade or so Bill and I forged an incredible friendship, as well. I’ll be forever grateful for all of the great advice he shared with me, and I’m just as grateful for all the ways he never hesitated to help me. One sage piece of advice he offered me — and I’ll share it with you in case you want to take it to heart — was to never keep score when it comes to what you do for your friends. Help them whenever you can and be happy to do it. Enjoy the great satisfaction that is the by-product of helping someone in need. Bill made it his duty to help whoever he could whenever he could. I lost a great friend and racing has lost a great friend in Bill Galvin, too. Until we meet again my friend. RIP, Bill.

The Canadian Horse Racing Hall of Fame also posted a lengthy tribute to the native of Arnprior, ON on their Facebook page. There were several replies of condolences including this one from JoAnn Kennedy:

Bill will be missed at the Chaplaincy BBQ’S held at the patio behind the kitchen on the Woodbine backstretch. Bill was always in attendance. He had such a strong love of horses and racing as well as for the well-being of the grooms and hot walkers. He was a staunch supporter of the Racetrack Chaplaincy for both thoroughbred and standardbred.

I had the pleasure of working side by side with Bill Gavin as he helped and worked endless hours to raise funding with The Mohawk Racetrack Chaplaincy. Bill Gavin was a great supporter and helped Grooms in any way he could.

Galvin was known as a big promoter of youth in the industry and one of his ideas, the Youth Literary Derby, was a huge hit getting young people involved in the sport through prose. Tennille Hobbins, mother of one of the winners of the writing contest, paid tribute to Galvin’s continuous involvement with youth:

We are very sad to hear this news. Bill came into our lives a few years ago. Our daughter Avery was one of the winners from the Youth Literary Derby in 2018. Bill’s writing contest opened many doors to some really amazing experiences and connections in the horse world. We loved visiting various tracks and seeing a different side of the horse industry, than the jumping/dressage world we are used to. Thanks to Bill, Avery also was featured in TROT magazine.

Bill was very fond and proud of Avery and would check in every few months to see how she was doing (especially her riding, competitions and her writing). He left a giant mark on the horse industry and will be sadly missed by all who knew him.

Galvin, who, until his passing was an active member of the Canadian Chapter of the United States Harness Writers Association had this excellent piece written on his life in advance of his induction into the Canadian Hall of Fame in 2014 (full story here).

For me, the one shining memory that I will always have about Bill is that he is the nicest person I have ever met in the industry and perhaps in my entire life, period. Anyone who knows me well understands that hyperbole isn’t my thing. There is no exaggeration here. Bill was always smiling, always cheerful and always wanted to know how you were doing. The last time I spoke with him at Grand River the first words out of his mouth were praise for my son Nicholas’ media work. “He’s a real go-getter,” Galvin beamed. “A sure thing!” After I left the track it wasn’t long before I got a message from Bill. “Is your next piece going to be titled: “From the Tarmac”? he asked, not expecting a response. That was Bill; always encouraging, always promoting and always positive. I and many others will miss him greatly but hold onto the fond memories of the nicest man anyone would ever meet.