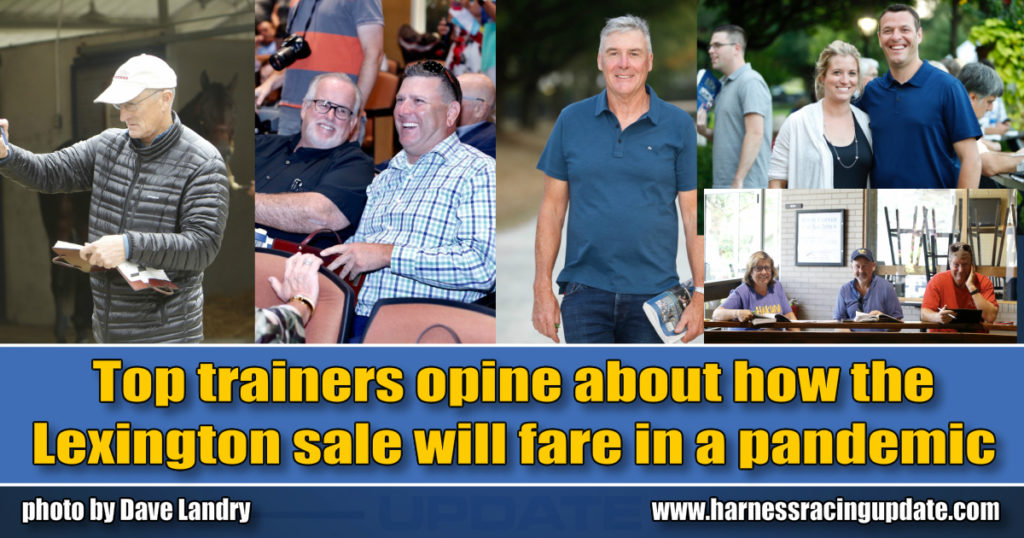 The Lexington Selected Yearling Sale kicks off Monday at Fasig-Tipton.

How will the Lexington Selected Yearling Sale look through the lens of the COVID-19 pandemic?

According to the trainers contacted by HRU, so far, pretty much the same.

“We’ve been able to get to the farms and do what we need to do,” said trainer Tony Alagna. “We’re very conscientious of social distancing at the farms and they’re scheduling less people on top of each other. Pretty much if you have an appointment, you’re the only person there, whereas, in years before, you’d have maybe a couple of different trainers looking at horses at the same time, so I think the farms are all doing their part and we’re doing the same to accommodate them.”

However, once the lights come up on Monday night (Oct. 5) at Fasig-Tipton, it will definitely not be business as usual, because for the first time in its 15-year history, Lexington will become a virtual reality, since you can now place your bids online, in addition to on the phone, and, of course, in person.

“We have a third-party provider that’s going to be doing the online bidding process for us,” said David Reid, who manages the sale with Randy Manges. “In addition, we have extra bid spotters and extra telephone operators.”

With some owners unable or unwilling to attend in person, virtual bidding could be a game changer and according to trainer Chris Ryder, could be something worth retaining for future years.

“It might turn out to be a good thing for the sales, because it’s a new avenue, a new dynamic,” Ryder said. “But I think they’re going to be surprised that it’s going to help them.”

As good as the virtual bidding may turn out to be, it’s still an unknown entity that brings with it a whole different set of problems.

Toscano has owners that are afraid to come, but still really want to come.

“So, they keep calling me and saying, ‘Have you been out there yet? How safe is it?’” she said.

Reid experienced the safety issues first-hand in September at a thoroughbred sale where he sold horses under his Preferred Equine sales agency banner.

“I saw it operate from a thoroughbred perspective and it wasn’t an issue at all,” Reid said. “My personal opinion is, it’s very safe.”

A new tent was added at Fasig-Tipton so people have room to be socially distant and there will be video monitors within the tents and around the area for everyone to know what’s going on at the sale.

“We want people to stay fluid to accommodate all bidders,” said Reid. “We really don’t want somebody going in there and sitting there all night. We would prefer to have the active bidders go in and go out but by no means are they going to feel rushed.”

It’s impossible to know how bidding will feel with some coming in by phone or computer, but one thing’s for sure: It will be different.

“I think you’re going to have a lot more people that will give a hard number and they’ll say go to $200,000, but if they were here, they might go to $275,000,” said Alagna. “So, I think that will be one of the biggest differences between them being here or not being here.”

Trainer Brett Pelling, who thinks new sires such as Walner and Huntsville could be particularly popular, thinks the diehards will be there and their trainers will be there.

“I’m sure at the end, when they crunch the numbers, there’ll be strength and weakness,” Pelling said. “The thoroughbreds showed us that there was definitely a weakness in the middle-to-lower-range horses. We’ll probably be down, but I suspect the high-end stuff that everyone’s looking at, I think they’ll probably still sell extremely well.”

Alagna said he thinks the majority of people that are bidding, especially on the top-end horses, are successful in another business, and, for them, Lexington is a getaway.

“It’s where they get to really share their passion of horses and horse racing with other like-minded individuals,” Alagna said. “The way I look at it is, we all feel extremely blessed that we’re able to even race and hold the sales, so I think everybody is going out of their way to make sure they do it the right way.”

Toscano, who normally would have about 10 owners at the sale, is expecting to only have three this year, which means she and her husband Brad will need to be working their phones to stay up with all of those who can’t be there.

“There’s a certain amount of ego that gets involved in buying these horses and when they latch onto one and they’re here, they’re more apt to reach and go an extra bid or two,” said Toscano. “Whereas, if somebody says your budget is $50,000, I might push it to $65,000, but I’m not pushing it to $100,000, but if they’re here they may. I think that’s where the bargains may happen, is that you may actually get a horse that brings the price that you think it should bring instead of the appreciated price that happens when everybody’s present.”

One thing that Toscano really liked this year was the change to the yearling videos. They were done to accommodate the owners that are not coming by showing them their legs and showing close-ups and showing walking videos. But she knows that videos will never take the place of being there for her owners.

“They like to see my initial reaction when I see one,” Toscano said. “And they try to feel me out right now on the phone and I think they’re getting tired of hearing me say I haven’t seen everything yet. And then it keeps raining and you can’t turn them out. It’s just one set of challenges after the other.”

Trainer Anthony MacDonald of TheStable.ca said he doesn’t expect his Canadian clients will be coming to Lexington this year, but he still expects a good turnout.

“Could be anywhere from 10 to 50,” MacDonald said. “I know there’s going to be at least 10 there that I can think of really quick. An elderly gentleman that owns horses with us is an auctioneer. And he said, ‘I listen to all your videos and you’re talking about how the sales are going to falter.’ He said, ‘I’m going to tell you something, I’ve been an auctioneer for 40 years. Every time there’s an economic crisis the auctions get very, very, very strong. Because everyone thinks the same thing: bargains, and there end up being none.’”