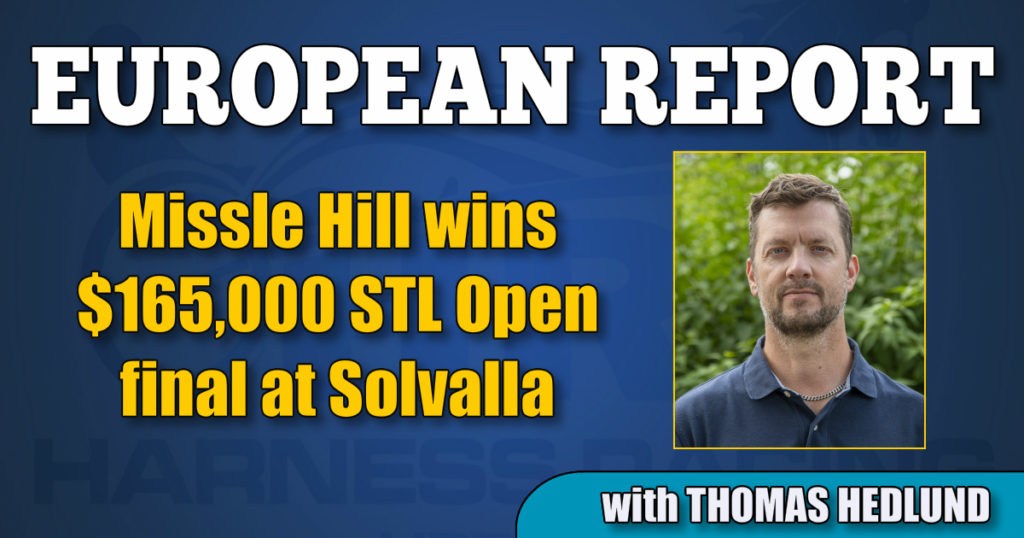 Per Lennartsson drove Missle Hill from post 4 and the duo opened quickly in the first quarter, but two horses were on the inside throughout the whole first turn and even when the trio reached the back stretch for the first time, Missle Hill was still three wide at a high pace. Leader Racing Mange, who was pushed to the front after 450 meters, and earlier leader Generaal Bianco, landed on a :27.1 mark for the first quarter in the 1.3-mile long race and Joakim Lövgren had few options other than letting Missle Hill lead the way after 600 meters.

The heavy first quarter made the race more calm during the second part of the first lap and Missle Hill’s stablemate Double Exposure, driven by Johan Untersteiner, reached the front with three quarters remaining.

Two of the best horses on line in front positions left Dreamoko first over and when Dreamoko’s power began to fade in the last turn, Missle Hill would soon get his spot from the pocket.

”I couldn’t even imagine that (Missle Hill) should beat us in that moment. Double Exposure answered on my commands and I thought that we would win, for sure, but the other horse just flew the last 100 meters,” said Untersteiner after the race.

Missle Hill exploded when Lennartsson left the back of Double Exposure with 150 meters to go and the Muscle Hill son flew to a tight, but quite safe win in a mile rate of 1:53.4 over 1.3 miles. Double Exposure made Redén’s day complete as runner up. Racing Mange finished third in nice style.

“This was awesome and what a nice horse to drive. His legs just kept going faster and faster over the home stretch and in a way I’m surprised that he could win after the tough first quarter. The only way we could have won the race was to let Double Exposure take the lead in that moment. With her on the outside, I doubt that Missle Hill would have had power to defend himself,” said a very satisfied Lennartsson after the race.

Alessandro Gocciado had six out of nine contenders in $208,000 Gran Premio Continentale at the half-mile track in Bologna, Italy on Sunday afternoon (Sept. 27) and the trainer himself sat behind the winner.

Last year’s Derby winner Alrajah One (Maharajah) made his first start in Gocciadoro’s barn and when Alrajah One came to the lead at an early stage, the race was over.

Stablemate Amon You SM tried to challenge on the outside during the last quarter, but Alrajah One was never threatened and he came home in mile rate 1:58.2 over 1.3 miles.