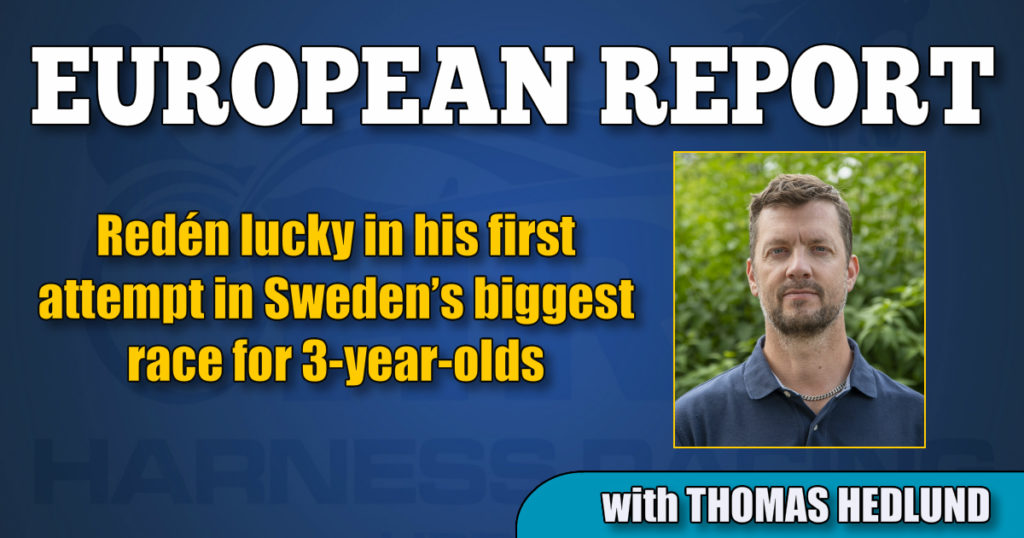 The $910,000 Svenskt Travkriterium, Sweden’s biggest race for 3-year-olds, was held at Solvalla on Saturday afternoon (Sept. 26) and a new name presented himself in this stake. Daniel Redén has had several successful years as trainer since he became professional in 2017, but the Svenskt Travkriterium was a race that he never even had participated in as a conditioner prior to this year.

In 1998, Redén was groom when his horse Lucky Po won the Kriteriet with trainer Stefan Melander in the bike.

In this year’s edition Redén had two shots — Brambling (Bold Eagle) won his elimination and Beacon Kronos advanced to the final via a second place two weeks ago.

In Saturday’s race, Brambling exploded behind the gate and flew to the front with Örjan Kihlström in the bike. When in front, Brambling expressed nice form in eager style and when tough opponents San Moteur and Henry Flyer Sisu attacked at the back stretch, the pace increased. Brambling didn’t really look like the winner in the last turn, but Kihlström navigated the SRF Stable-owned horse gently throughout the turn and pulled the ear plugs when the field entered the stretch. Brambling came back on the inside and held San Moteur (trained by Björn Goop) and Henry Flyer Sisu (trained by Timo Nurmos) behind him in a mile rate of 1:57.3 over 1.6 miles.

“It’s incredible how this horse wants to fight in the races. He’s been quite difficult to get clean in his gait and he’s close to pacing, especially in the turns, but his will is unbelievable,” said Redén after the victory.

Suspended Goop happy alongside the track at Solvalla

Björn Goop had three horses in $635,000 Oaks at Solvalla racetrack on Saturday afternoon and from beside the track, the dominant driver — and successful trainer — saw his Bold Eagle filly Eagle Eye Sherry win the prestigious Oaks.

Stefan Persson replaced Goop in the bike and from post 1, Persson let Eagle Eye Sherry open quickly the first quarter of a mile, to then give the lead away to Beauty Kronos.

With undefeated Hoboken Am first over, the race was locked and the second part of the first lap was slow and horses in the back of the field got problems when the pace began to grow at the back stretch. Leader Beauty Kronos, paired with Örjan Kihlström, seemed to have control over the field in mid last turn, but the Muscle Hill filly lost her gait just ahead of the home stretch, which left Hoboken Am alone in the lead. From the pocket, Eagle Eye Sherry found her space to sprint and shortly before the wire, Goop’s trotter disarmed Hoboken Am.

The mile rate over 1.3 miles was 1:57.3. Hoboken Am held strongly as runner up ahead of Barbro Kronos.

Björn Goop’s other horses in Oaks finished fourth and fifth.

11 in a row for Mascate Match

Pekka Korpi-trained Mascate Match (Muscle Mass) knows how to win races and in the $135,000 Villinmiehen Tammakilpa in Lappeenranta, the 4-year-old mare took a safe wire-to-wire win in mile rate 1:58.1 over 1.3 miles.

This was Mascate Match’s 11th consecutive win and she is by far the best 4-year-old trotter in the Finnish crop.