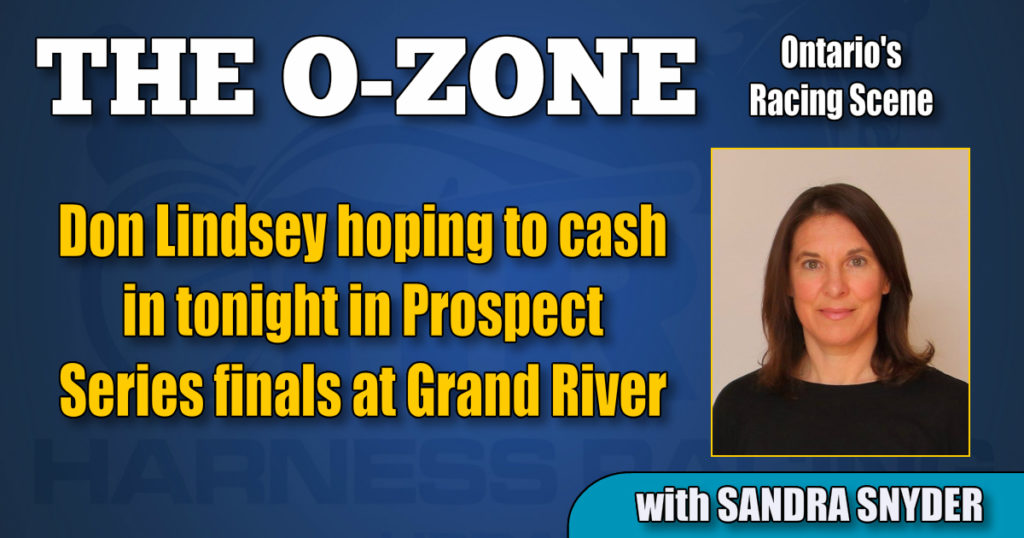 Open to horses nominated to the Ontario Sires Stakes (OSS) program, the Prospect Series was held at smaller racetracks across the province with five legs per division. In each leg, or by entering a leg that did not draw five contestants, horses accumulated points toward the $15,000 Finals.

Trainer Don Lindsey will harness Hall Of Secrets in the 3-year-old trotting colt final, the last of the eight finals on tap tonight, and the Fergus, ON resident is hoping the gelding can match the winning effort he put together in the Sept. 13 leg at Flamboro Downs (video here).

“He was very good his last start. He’s been inconsistent this summer,” said Lindsey, whose farm is just 11 kilometres from Grand River. “He’s showed some really good miles and he’s showed some not spectacular performances. I thought when we shut him down last year that he would fill out and be a big strong horse and be a little better than he turned out to be. He seems to be getting a little better lately, but he started off the year just a little behind where we thought he might be.”

Lindsey trains the Angus Hall gelding for his father, Paul Lindsey, who purchased the gelding out of the 2018 London Selected Yearling Sale for $15,000. Up until 2002, the elder Lindsey trained his own horses and it was the experience of growing up around racehorses that led his son to choose a career in harness racing over a full-time career in farming.

“My dad always had standardbreds. We usually had a couple that we were jogging and training at the farm. We had dairy cows growing up, and then when I was 19 my dad got out of the dairy cows,” said Lindsey, adding that his father also dabbled in the breeding side of the business. “I was flip-flopping between farming and training horses. I enjoy both. I still enjoy both very much. I went to college for a bit and then I took a year off from college and worked for Budd Thorne, and then I went back and finished college and when I came back out I immediately went back working with the standardbreds. I worked for Dave Menary and then I worked for Scott Donaldson and then decided to go on my own.”

When Lindsey launched his own stable in 2004 his dad was an early supporter, along with Paul Kleinpaste and William Alempijevic. The partners started with ‘B’ track horses and then advanced to claimers, purchased a few yearlings along the way, and have found their niche buying three-year-olds to race in the conditioned ranks.

“Our main bread and butter for the last so many years has been buying overnight horses to race. We kind of follow the OSS program all year and we have had luck finding ones we like in that program that turn out to be good overnight horses,” said Lindsey. “I have a barn of very nice horses right now. There’s a few of them that are conditioned horses that race weekly at Mohawk, and then I have some younger horses that are racing and a few that are B track horses, but the majority currently right now are older conditioned horses.”

In addition to Hall Of Secrets, Lindsey has sent 2-year-old trotting gelding Warrawee Windsor (Royalty For Life) and 3-year-old pacing gelding Poseidon Seelster (Sunshine Beach) behind the gate in OSS action this summer.

Poseidon Seelster is a recent addition to the barn, purchased with an eye to the gelding’s prospects as an aged horse. In his first start for Lindsey, Kleinpaste, Alempijevic and Garth Bechtel, Poseidon Seelster finished third in a Grassroots leg, securing a spot in the Oct. 2 Semi-Finals.

“That’s the plan, next week race him in the Grassroots Semi-Final and hopefully the Grassroots Final and from there we’ll play it by ear,” said the trainer. “Hopefully he’ll make the leap to a Saturday night horse.”

Among the horses that have made that leap for Lindsey and his partners are five-year-old Shadow Play son Yacht Seelster and 9-year-old Stonebridge Regal gelding Regal Son. Both horses will be part of Saturday’s Mohawk Million undercard on Sept. 26 with Yacht Seelster competing in the non-winners of $22,000 conditioned level and Regal Son in the non-winners of $8,000 class. Both horses were purchased at the end of their OSS career and Yacht Seelster now boasts lifetime earnings of $258,584, while Regal Son has accumulated $555,614.

One of the early successes in the horseman’s strategy of acquiring 3-year-olds at the end of their provincial stakes careers was Alexie Mattosie. Lindsey, Kleinpaste, Alempijevic and Dennis Mavrin purchased the No Pan Intended son in 2009 and the gelding went on to earn over $1.1 million in his career. Along the way Alexie Mattosie battled the best open pacers on both sides of the border and bested Foiled Again in the 2011 William Haughton Memorial.

“We bought him after the Grassroots Final and he raced at the top level. Him winning the William Haughton Memorial was a highlight,” said Lindsey, who retired Alexie Mattosie to the Fergus farm in 2017. “Then I had a trotter by the name of Keystone Orion (Angus Hall) that I bought as a yearling in Harrisburg (in 2010) and he won a Gold at 2 and a Gold at 3.”

Lindsey’s operation typically houses 10 to 14 horses, a number that works well for the trainer, who manages the stable with the support of family and fellow trainer Steve Davis.

“I’m stabled on the farm where I grew up, I live here now. My dad’s out every day, jogs and trains his own horses. My brother (Glen) helps part-time with his horse, and then Steve Davis, he stables a couple horses here and he helps me jog and train,” said Lindsey. “There’s currently 12 horses in training. Depends on the season — in the winter months 12 to 14 and in the summer I prefer the 10 to 12. We still, as a family, do have a small cash crop operation. It’s more my brother and my dad, but I try to help there.”

With a formula that is working for Lindsey, his partners and his family, wife Andrea and sons Brennan, 6, and Jack, 3, the horseman has no intentions of making any changes in the near future. He will be keeping an eye out for potential 3-year-olds and possibly acquiring a few yearlings in the fall, keeping in mind advice imparted by the late Mark Austin.

“Mark Austin really pressed into me to have two-thirds racehorses and a third young horses, I think that’s a pretty good rule,” said Lindsey, who has put Austin’s advice to work alongside the knowledge gained from his father and the other horse people who have shared their wisdom over the years. “I’ve learned from a lot of people. There’s a lot of really good people in this game that you can learn a lot from.”