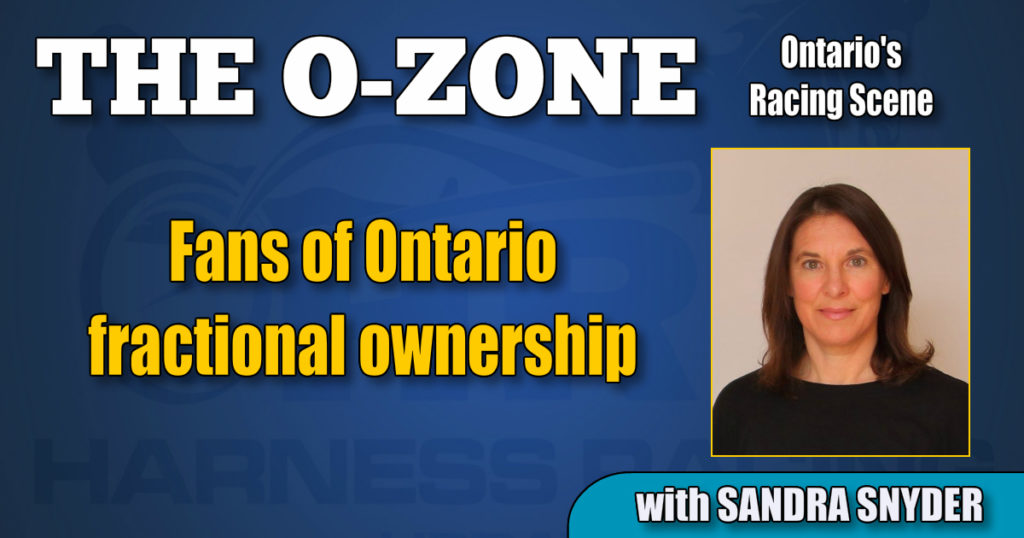 Katherine Hedley and Chris Clarridge have stayed involved in fractional ownership groups in Ontario because of the fun and fellowship the Landmark group and TheStable.ca have provided.

Fractional ownership groups of every shape and size have sprung up across the horse racing landscape as way for people to enjoy the pleasures of ownership with a minimum of risk.

Katherine Hedley and Chris Clarridge got involved with fractional ownership for different reasons, but they have remained involved because of the fun and fellowship their modest investment has provided.

Hedley, who hails from Canfield, ON, was sold on fractional ownership by her sister Kim Huson, who was Anthony MacDonald’s campaign manager when he ran for provincial parliament in 2014. The sisters grew up with standardbreds — their father Jack Huson trained a few horses when they were children — so Hedley was receptive when her sister pitched the idea of owning a share of a racehorse.

“My dad passed away at a young age, so by the time I was 13, 14, we didn’t have them, but we were those bratty kids running around Elmira and Orangeville and different places that aren’t even in business anymore,” said Hedley. “We did all that as kids and then got out of it just because, you know, I married a non-horse guy.”

Hedley purchased her first share in 2017 and has owned pieces of four horses in the years since. At present she owns a share of 2-year-old trotting filly Tipsy In Dixie (Muscle Mass–Twin B Alibi) and 2-year-old pacing gelding Warrawee Wazzup (Warrawee Needy–Momoney Bluechip). Tipsy In Dixie was her original purchase last fall and Warrawee Wazzup followed as she connected a new passion with an old one.

“They had a fundraiser with the Children’s Hospital and Rick Vaive was promoting it, so because I’m still involved with minor hockey I thought it would be kind of neat to say that I owned a horse with Rick Vaive, forgetting that most of the people that I work with are under the age of 35 and don’t know who Rick Vaive is. So they weren’t quite as impressed as I was,” said Hedley with a laugh. “I did tell them that Doug Gilmour is also involved, so that was a little bit of an okay thing, but Rick Vaive kind of went over their heads. I just thought that my horses and my hockey kind of colliding, that was sort of a fun concept.”

Tipsy In Dixie boasts a record of two wins and one second in four starts and sits second in the 2-year-old trotting filly Grassroots standings. Warrawee Wazzup made two early season starts and logged one third-place result. Once racetracks started to permit owners on site, Hedley started following Tipsy In Dixie to racetracks around the province and has missed just one of the filly’s starts.

“We are those crazy people, we’ve been to Grand River twice to watch her and two weeks ago when she was in Hanover. We were heading to Haliburton to the cottage with some friends, but we detoured to Hanover first so instead of a three and a half hour drive to Haliburton, we were like six,” said the enthusiastic owner. “My kids all played hockey and ball and everything, so we were used to driving to games.”

Hedley also enjoys going to the Tomiko Training Centre to visit her horses and she and Huson have participated in a variety of the social extra-curriculars offered by TheStable.ca.

“My sister turned 50 last year and she had different things on her bucket list that she was going to do, and she was like, ‘So I want to drive a racehorse’. And I’m like, ‘Well, good for you’. And she said, ‘So we have signed up for…’ and I’m like, ‘No, I don’t need to do this’,” said Hedley of her involuntary enrollment in the 2019 Summer School program. “So that was a fun day. We’ve gone to the open houses. Anthony hosts a dinner at Mohawk just before Christmas, just before the Open House, and Kim and I went up and sat with some people from Ohio, so that was kind of neat to meet clients from other places.”

The personal connections to the horses, other owners and TheStable.ca team are what Hedley appreciates most about the fractional ownership experience, along with the fun of sharing a new hobby with her sister.

“I have no interest in getting multiple shares,” she explained, noting that she budgets $30 per month per horse in addition to the initial cost of the share purchase, which varies depending on the horse. “I don’t want it to become an investment that way. This is just fun, it’s a fun little hobby to have.”

Clarridge found his way into fractional ownership in an effort to continue a hobby that he has enjoyed since graduating from university. In 2016, the Barrie, ON resident purchased shares in the Landmark 10 Racing Stable and has continued his participation through the 11th, 12th, 13thand 14thiterations.

“I had owned horse for probably 40 years with my brother-in-law and it just became too expensive to buy them on your own and pay all the expenses,” said Clarridge, who opted for Landmark due to a familiarity with Mark Steacy. “I really love the horses and wanted to stay involved in it, but it was just a much easier way to manage the expenses and to be able to budget better. In four years I’ve paid the upfront costs of buying a share — I’ve owned multiple shares each year — but I’ve never had to pay another dime any year yet.”

At the moment, Clarridge is following the exploits of 12 horses, two of them from the original Landmark 10 Racing Stable, five from Landmark 12 and six from Landmark 13. Leading the way are 3-year-old trotting filly Moana (Muscle Mass–Andover The Top) and 3-year-old trotting colt Remember Titans (E L Titan–Oaklea Samantha). Remember Titans currently sits atop the Grassroots standings and Moana is second, both with one regular season event left before the Oct. 2 Semi-Finals.

“Being involved in every Landmark for the last four years, man just trying to keep up to the horses racing everywhere has been tough enough,” said Clarridge. “Every day you’re on Standardbred Canada to see who is racing and where they’re racing. The good part is, every racetrack in Ontario basically broadcasts their races, so it’s been a lot of fun just to be able to watch them on the computer, although I’d love to see them in person a lot more.”

Watching the young horses learn the lessons that will transform them into racehorses is what Clarridge loves most about harness racing and is one of the reasons he appreciates the Landmark format, which sees him invested in four to six different yearlings each year.

“Personally, I love watching them get developed. I usually go down to the farm in Lansdowne or down to First Line (Training Centre), and I love to do photography, so I take videos and pictures of the yearlings when they are being trained down and I get a lot of thrill out of that, watching them get developed,” he explained. “This year has been tough, because with COVD-19 going on, I have not been able to go to the farm or even down to Lansdowne. I think I went once earlier in the spring to take some videos of the 2-year-olds, because the group loves to see pictures of their horses. It’s a long wait when you buy them in October or November and you don’t see anything really until June or July. So I really enjoy doing that.

If this is the year to take a leap into standardbred ownership there are a variety of fractional ownership groups across North America that offer the thrill of following a horse through its career and the fellowship of sharing that journey with other owners. Clarridge noted that even at the elite levels of the game, multiple ownership has become the norm, allowing owners to share expenses and spread their risk.