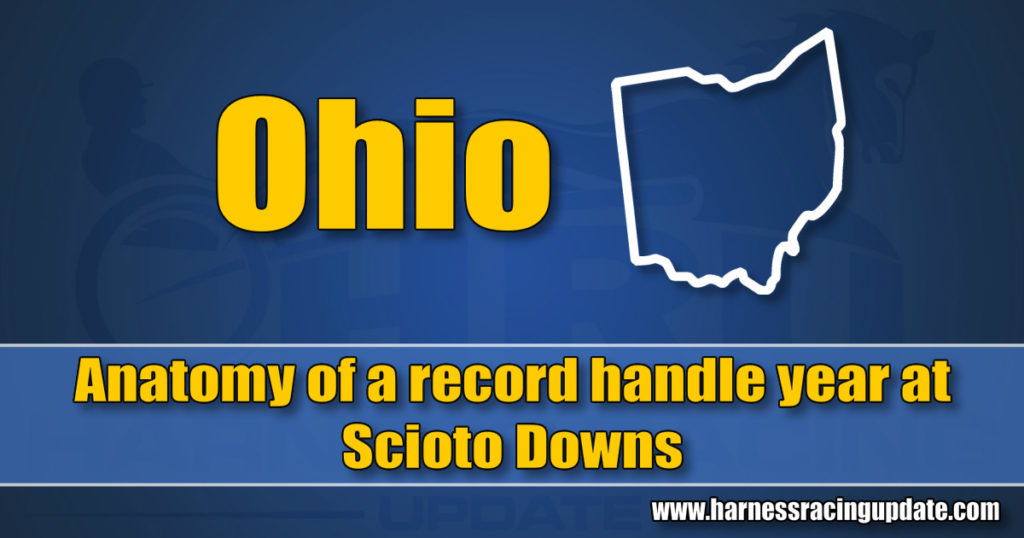 Anatomy of a record handle year at Scioto Downs

How the rookie team of Joe Morris, Jason Roth and Gabe Prewitt helped post a record handle of $55.3 million at the Columbus, OH track — an increase of more than $35 million (and 184 per cent) from 2019.

It almost figures. In a year in which only a sprinkling of fans were on hand to watch the Hambletonian and none will be allowed to take in the Little Brown Jug, another track in central Ohio — first with no fans in the stands and then with just a handful of them — shattered every wagering record in its 62-year history.

Until this spring, the futuristic-looking Scioto Downs, which opened in 1959 and lost a photo-finish to the St. Lawrence Seaway as a nominee for Outstanding Civil Engineering Achievement, has been a perennial also-ran in the race for North American simulcast dollars.

That all changed when the first-year team of senior vice-president of racing Joe Morris, racing secretary Jason Roth and director of racing Gabe Prewitt put their heads together and turned Scioto Downs into a major player in the signal export business.

“We’re a new team and we went through things and tried to do what’s best for the horsemen and the horseplayer,” said Prewitt. “Of course, we were lucky to get the jump on the competition.”

Scioto Downs’ COVID-19-delayed opening on May 22 made the south Columbus oval the first track in North America to welcome back pari-mutuel racing.

“It allowed us to get our product out there, especially to people that had not previous seen Scioto racing,” said Prewitt. “It also helped that everybody wanted to enter and race with us. We had a seven to 10 day jump on the competition.”

Scioto Downs took full advantage of their calendar advantage by opening with 12 consecutive handles of over $1 million.

Prewitt employed another and rather unique yardstick for measuring success.

“I knew we were making an impact when I heard 15 different pronunciations of Scioto the first week of the meeting. There were a lot of new players.”

He said that in Morris giving him the green light to try new things, and with Roth putting together attractive racing cards that bettors embraced, the season was off and pacing.

Scioto Downs kicked off the season with free past performances and live video on its website, as well as placing some of its races on the TVG network.

When the first weekend of racing was over, Scioto had posted its second, third and fourth highest handles in track history.

“We revamped the betting menu, completely. We created several carryover opportunities for players,” said Prewitt. “And my thing is the scheduling of races. It’s very important to get your races in the right spots.”

Prewitt said he would position himself in a room he called the dungeon (actually the basement tote room) where he would monitor the signals from up to 12 different tracks.

“I did everything I could to stay off major signals,” he said. “I was always looking for a good spot for us, even thinking three or four races down the card. It’s like playing poker every night. You’re zigging and zagging to position your races. I learned by watching Dave Bianconi (vice-president of racing at Northfield Park). He’s the best at it.”

The season was so great that it took Scioto Downs only 17 programs to top the $19.5 million it collected in wagers in all of 2019.

Prewitt pounded the Twitter world each racing night when betting updates and carryover teasers under the banner of “#Senditin Army.”

He also paired with track announcer Barry Vicroy to handicap the races, not only giving selections, pointing out hot (or cold) drivers and trainers, and studying the odds board for underlays and overlays.

“We tried to add to the broadcast, offering horseplayers what they couldn’t find on the program pages,” said Prewitt. “Barry has been around long time. He knows Scioto and its horsemen.”

Prewitt knows the pressure will be on next year to maintain or increase Scioto Downs’ numbers.

“Hopefully, we’ll have a few tricks up our sleeves,” he said. “I think we should do a half-million every time we turn on the lights and race. So, if we race 90 nights, that’s a $45 million. And we’ll build on it from there, as we grow the brand.”