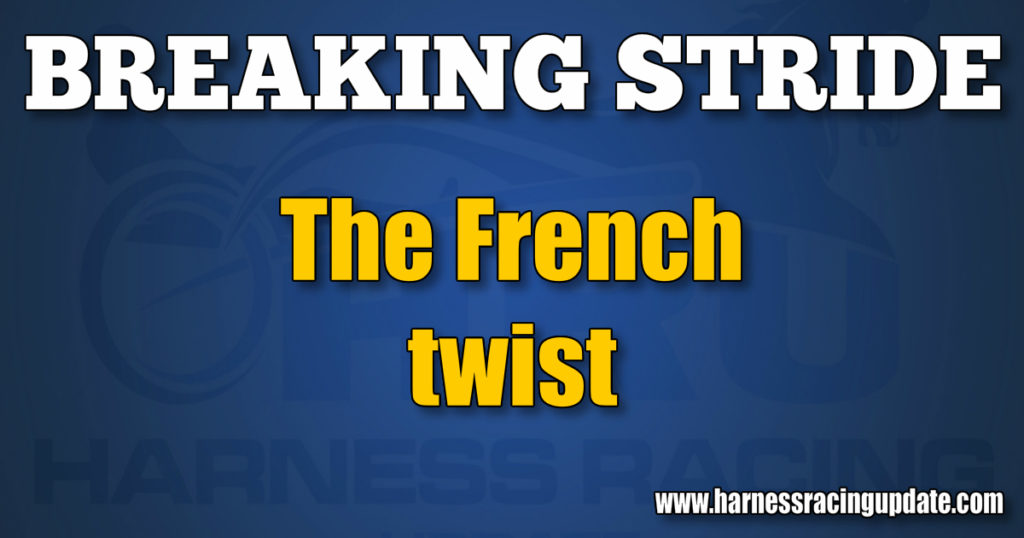 Monique, the mysterious Frenchwoman, arrived two days before the virus canceled international flights. David, the tech mogul who employs me as his driver, met her on an around the world cruise. During the voyage, he invited her for a visit to his mother’s farm in rural Ohio. She said Oui.

During our ride to the airport to pick her up, David dropped a couple of informational bombs. Monique worked in the rare art game, and heruncle had a trotter in the field of the most prestigious harness racing event in Europe, the Prix d’Amérique at Vincennes Hippodrome near Paris.

David and Monique emerged from the sliding glass doors trailed by a porter pushing a cart with two large blue suitcases and a matching garment bag. Monique was easy to identify, not easy to describe. She was tall, as tall as David. She was fit, but not anorexic thin. Her hair was black, straight, short, and chopped in straight lines, like one of those women doing the Charleston in the flapper era. She wore black pants and an odd pink top under an oversized men’s suitcoat. She set the whole ensemble off with an unfastened yellow scarf and black tennis shoes.

Her age was a puzzler. If I had to guess, I would imagine 40ish, but she was one of those people who, for a moment, looked like 30, and then looked 50ish. Her nose was a tad pointy, no makeup except around her dark eyes. She was not magazine beautiful, but she was striking. Watching her walk with her head held high, you sensed she was a woman who knew where she was going.

The porter tossed her luggage into the trunk. The couple slid into the backseat, which meant I could only catch glimpses of her face in my rearview mirror.

She did not waste time waiting for an introduction, “You must be the famous Trey, the wild man with the ponytail who amuses David. You are the man who loves trotters, never stops talking, and has many crazy plans.”

I nodded, “That’s pretty much the first draft of my headstone. Charmed to meet you…, Monique? Mona? Frenchie? Mademoiselle? What should I call you?”

She flickered a smile in the rearview as she said, “Monique will be just fine… although you do not CALL a person. You ask a person by what name would they prefer to be addressed.”

I sat up a bit, “Appreciate the pointer. By the way, your American is perfectamonte.”

“American is not a language.”

I heard David stifle a snort of laughter.

I panicked and tossed her a nothing burger, “What’s the French word for ‘perfect?’”

Another chuckle from David.

I plowed ahead, “So Monique, I heard through the grapevine that you’re a big fish in the art world. I have some unsigned Velvet Elvis on Styrofoam in my double-wide. Maybe you can give me an appraisal.”

In the rearview mirror, I watched her Mona Lisa smile. Then, as cool as ice, she said, “I’m always appraising.”

Another lame sentence slipped out of my mouth, “The Art World must be fascinating?”

“Selling and buying art is a pigsty of cheating, lies, and money laundering. My profession grows dirtier with each passing hour.”

I exhausted my French with, “Sacre bleu, are you sure you aren’t confusing art with harness racing?”

“Trotting racing in France is merveilleux.”

“Wonderful, magnificent. Has the infamous Trey ever visited my country?”

“No, the closest I ever got to France was a backroom poker game on the outskirts of Louisiana, in a town with a French name,Tulane-Gravier. Travel guides rate this town with negative five stars. I broke even but lived.”

“What does Monsieur Trey know about trotting in France?”

“Not much, just rumors. However, while lover boy was inside tracking you down, I YouTube’d the big French race.”

“And what were your impressions?”

“Ying and yang. Loved that they were big strong trotters, loved that they raced without much equipment, very nice camera work, and the announcer got so excited I thought he would have a stroke.”

“Well, the field was huge, I mean buffalo stampede huge. An owner could have a trotter that beats 14 horses and not get a check. Plus, it seemed the race lasted like 10 minutes. How far did they trot in that race?”

“In France, we only race le Trotteur Français. The French never race pacers. We have a season with over 11,000 trotting races with large fields. A typical race card has 5-7 races attele, with a sulky, and 2-3 races monte, with a jockey atop the horse’s back.”

I made a goofy clicking noise with my mouth before diving in for more, “Not loving the rider on the back thing.”

She smiled, “You would get used to this.”

“Maybe, but the huge fields are a turnoff. Do the math Mademoiselle, a race with 20 horses. Phew, I could go years without cashing a ticket. I’m figuring that if all the horses go to the rail after the first turn and the drivers lean back, the last horse would be in another state.”

“We do not have states in France, and our trotting drivers sit up, they cannot lean back.”

“And what else would Mister Trey want to know.”

“Hey Monique, Trey wants to know beaucoup about French racing, but right now, we are pulling into the Chateau De David. Maybe we can pick this up next ride. How do you say next ride.”

She gave me another Mona Lisa grin and shot back, “For about 15 seconds.”

That was adieu. Monique stepped out into the world of quarantine in central Ohio. The next ride and battle of the harness racing worlds would have to wait.